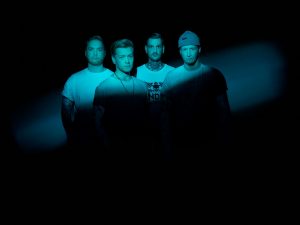 Halcyon Days has arrived, presenting their own brand of explosive metalcore. Based out of the Oslo, Norway music scene, Halcyon Days recently issued their full-length manifesto Keep Myself From Sinking – now available worldwide via Indie Recordings.  Highwire Daze recently caught up with Halcyon Days to find out more about their dynamic new album and the very famous production team involved, the music scene in Oslo, performing at the iconic Summer Breeze Music Festival, and more!  Read on…

Introduce yourself, tell me what you do in Halcyon Days, and how long the band has been together.
I’m Steffen, and I play bass and write for Halcyon Days alongside Andre´ (Guitar), Eirik (Drums) and Robbe (Vocals).

The band was started around 2011, and had its first release in 2012, but like many other young bands a lot have changed, and in our case, everything has changed except Andre´ who is the only founding member left. I like to add that the Halcyon Days you see today started in 2016 with the Release of our self-titled EP that introduced a similar sound of what we have today.

Where is the band based out of and what is your local music scene like there?
Our band’s home is in Oslo, but we the members are all from different towns here in Norway.

The music scene in Oslo is alive and well we must say, and after a long dry patch of not many new metal acts (local or touring) playing here, things are starting to get good. Oslo is more of a Punk rock, Scandi rock city, but the Metalcore Scene is growing as well.

How did you wind up signing with Indie Recordings?
Haha, we kept nagging them until they let us have a meeting.

We have a lot of friends playing in bands who signed with Indie Recordings before us, and we heard nothing but good things from them. We wanted to step up our game in general, and we saw that Indie was the right label for us. 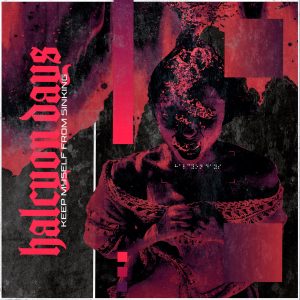 Is there any overall story or concept behind the album title Keep Myself From Sinking?
We went full on 2005 metalcore 1-0-1 and wrote an album about dealing with bad relationships with partners, drugs and everyday life, and the struggle of pulling through it all and keeping your head above water.

Select two songs from Keep Myself From Sinking and what inspired the lyrics?
Robbe ( Vocals, answered this one himself )

All the lyrics on this album is very personal to me and is all about my experiences through the last years of my 20’s.

“With Shadows, we’ve created one of our best tracks in my opinion, with everything from head crushing breakdowns and intense emotional vocals to catchy melodic hooks and acoustic guitars in this versatile track about the struggle of fighting your inner voice, anger, impulses and your own thoughts of how other people perceive you.”

“Better Days is a fast-paced and heavy track about escaping your own personal darkness, being able to open up to the people around you about it, and thanking them for their patience and support.”

Who produced Keep Myself From Sinking and what was it like working with them?
The DIY attitude is strong in us, but on this one we wanted to try something different.

We wrote the record ourselves as we always do, glued to a desk with a MacBook and Cubase running for about a year. We wanted to record with someone who could up our recordings, especially when it came to drums and vocals, so naturally we went to a couple of Swedes. We recorded with Daniel Bergstrand (In Flames, Meshuggah, Dimmu Borgir, At The Gates) and Fredrik Tordendahl (Meshuggah).

Daniel helped us loads when it came to pushing ourselves when tracking, and Fredrik kept the guitars going sturdy throughout the process. We got the album Mixed and mastered by Henrik Udd (Architects, Dayseeker) since we love the things he does with heavy layered metalcore.

What could one expect from a live Halcyon Days show?
A highly energetic show, with a big focus on the visuals as well as the band sounding tight.

We have experimented a lot with video and light production lately to make sure that even the smallest of venues feel like a big fucking show.

What was the experience like playing the Summer Breeze Open Air Festival?
Humbling. It’s A strange feeling to suddenly eat breakfast next to Trivium, and then playing a show at one Europe’s biggest festivals the same day. We can’t wait to come back.

What are you looking forward to the most about your upcoming show with labelmates Fixation?
Getting them drunk<3 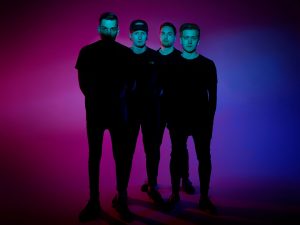 If Halcyon Days could open for any band either now or from the past, who would it be and why?
Counterparts for sure, would be an honor and a privilege. They are a big inspiration, and they seem like great dudes as well.

Are you involved with any other bands or projects outside of Halcyon Days?
We all had more time for different band projects earlier and a lot of us have actually crossed paths before we ended up in HD together.

As of today, Steffen also plays in an Indie rock project called. “Gutt(20)”  We sing in Norwegian, and it is a shared project of me and a couple of the guys from our label mates in Atena.

Robbe has done some guest vocal appearances the past year for some of our friends’ bands as well as his own music podcast where he talks with Norwegian Underground bands and artists every week.

André works as a producer and studio engineer for some of our friends bands alongside Halcyon Days.

What do you hope the rest of 2022 brings for you and Halcyon Days?
We´re finishing up writing an EP that we hope we’re able to release early next year, and we’re playing a bunch of Norwegian and Scandinavian shows this fall.

Any final words of wisdom?
Extra Joss, the royal jelly!

ENSLAVED Announces New Album, “UTGARD,” To Be Released This Fall