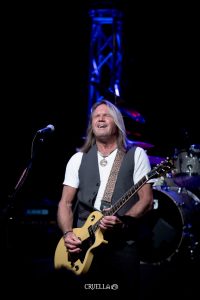 The omnipresent Charlie Huhn of Foghat

Charlie Huhn made his debut as the lead vocalist/rhythm guitarist of the legendary Foghat in the year 2000, and has participated on their studio albums Family Joules (2003), Last Train Home (2010), and Under The Influence (2017).  Foghat has issued a good number of live albums since Huhn’s arrival – this would include their just released Live At The Belly Up magnum opus – a recording that shows just how absolutely mesmerizing and timeless Foghat’s music is within the confines of the legendary Solana Beach, CA establishment.

In addition to his tenure with Foghat, Charlie Huhn has amassed a thoroughly impressive resume over the years – supplying lead vocals for bands and artists such as Gary Moore, Axel Rudi Pell, Victory, and the one and only Ted Nugent!  We caught up with the omnipresent Mr. Huhn at The Canyon Club in Agoura Hills just right before Foghat would devastate the venue with the rip-roaring sounds of Slow Ride, Fool For The City, Under The Influence and a whole lot more!  Read on as we discuss the brilliant career of Charlie Huhn from his days with Nugent in the 80’s to raging in the present with the almighty Foghat!

What made you decide to release “Live At The Belly Up” as the next official Foghat live album?
It was an executive decision that we needed another live album. [laughs] Actually, what it was, we play the club that was infamous in Southern California having hosted other major groups like The Stones and other people – we figured it was a notch in our belt. Then a recording and a performance, was stellar so we were real happy with that outcome.  Just figured, what the heck? Just put out another live one because it sounded good. 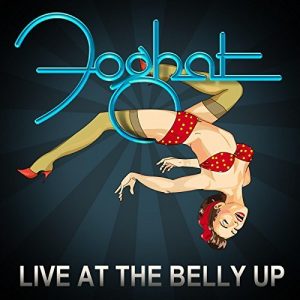 Foghat – Live At The Belly Up

Overall, how do you think the Under the Influence album compares to the previous albums?
I think it stands up pretty well. We have some great production and co-writing help from Tom Hambridge. It’s great to get Nick Jameson and Kim Simmonds back out in the fold.  We were real happy with the outcome. We played about 4 of the songs over the past year over our set. Of course you know these days, the same as the old days as far as the listening audience buying product or getting airplay. So that whole side of the business is changing. But overall, real happy with the outcome of it.

We’re gonna go back to the first album that you were on. Family Joules? What was that experience like, recording with Foghat for the first time and what do you think of that album now?
Oh it was great, in fact it was a real rustic environment where we were recording and writing. It was fun collaborating with the guys. I came in with a bunch of material and we just put it all together. It was real educational and productive. Bryan Bassett, our lead guitar player, engineered it and mixed it and it turned out OK. I think a lot of the material there still stands up pretty well. It might be pretty interesting to hear another mixdown, but I think the material stands pretty strongly.

Last Train Home was the next studio album. What were your impressions of that particular album?
Oh, I really enjoyed that. That was our back to the blues/roots album. I thought we had some real stellar performances on that. Some real strong new songs, but we focused a lot on covering versions of songs that we were really important to us, individually. Like when Bryan did his lead on “So Many Roads,” it gave me shivers.  The song “Last Train Home” was pretty cool. I enjoyed writing that as well as Born For The Road, we all collaborated on that. Really cool back to the roots/blues stuff. 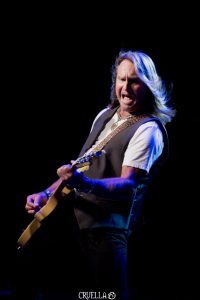 Charlie Huhn rocking out at The Rose in Pasadena

Blast back to the past, what kind of music education was it like to work with Ted Nugent so early on in your career?
That was like a real step up. I really learned how to become a more bona-fide musician professionally and entertainment wise. It pushed me to a different level of performance and brought things out of me that I didn’t realize I had. It was really educational as well. I guess that’s the word of the day. It was such a great experience and then right after that I was with Gary Moore, so that was like another huge step up the ladder. It’s been a long continuous educational process.

What was it like working with Gary Moore?
That was phenomenal. He was just amazing. In fact, yesterday I told Steve Jones during the lunchtime radio show. Jonesy’s Jukebox, I played Jonesy’s Les Paul Junior that he gave Gary Moore and recorded with it. So, that was kind of a fun cross of paths there. Gary was a virtuoso and had so much talent that it just amazed me. He could play any style of guitar. He could play Chinese, Jazz, bluegrass all flawlessly. His energy just exuded from him and it was almost magnetic and addictive. Songs just fell out of his sleeve when we’d write material together. It just made collaborating so easy because he was so prolific. We did a couple of albums together and then he got his solo deal on Virgin and the rest is history. It was just one of the more sadder times in my life that I heard he passed away, because he was too young.

One of the bands you were this was with Victory, you did several albums with them. What did you think of your time with Victory and especially the album Instinct?
Yeah, I did five albums with Victory and the first four were from 84-88 and I was in charge of writing all the lyrics and melodies, being the lead singer. The guys came up with the backing tracks and so, that was another unique challenge for me to become not so much a prolific writer but but having the challenge and the job to write all the stuff because it’s gonna go down in history so it’s gotta be good. I was really happy with the results of that stuff and it was a fun challenge and it was getting really successful over in Europe. I just had to leave the band in 88 because I had family obligations back in The States and that job took me away from home a lot. So, I quit the band then. But I was real proud of what we accomplished in the first four albums. Then, the album Instinct was a reunion back in I think 03 or 04. That was real fun, getting back together with the guys and bashing out some good hard rock again. Played a few shows and a big festival in Germany and then just another notch in the belt. 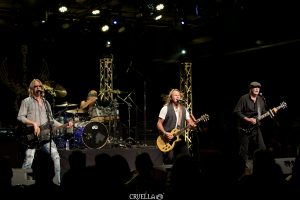 Foghat at The Rose in Pasadena

What was it like working with Axel Rudi Pell and what did you think of the Wild Obsession album ?
That was real fun. Axel is an old friend from back when he was in Steeler and I was in Victory and we were in Germany. We bump into each other every now and then and so when he got his solo deal going and wanted me to sing on it, I was really honored and I really enjoyed the material. Unfortunately I couldn’t remain in his group because I had other obligations. We’re still good friends. That was a real good experience too. Everything from recording the vocals and co writing lyrics, it was my first time I got to use pre-WWII original Neumann transformer microphones. They sounded so amazing! It was just phenomenal experience.

Back to Foghat!  What do you think has kept Slow Ride such a popular and enduring song after all this time, and do you still enjoy playing it?
Oh of course, it’s addictive. It’s got so much magic, it’s spontaneous, a happy song, it’s exciting. It has a magnetic groove and people just really love the song and they love to participate on it – it’s a win-win all the way around for everybody. It’s just one of those infectious songs that – you just really like. You know that Slow Ride was the most played song in strip clubs for about 20 years. That along with Girls, Girls, Girls. [laughs]

Bent By Sorrow and The Intensive Sounds of Dementia

From Out Of The Skies by Bulletboys (Frontiers Music Srl)