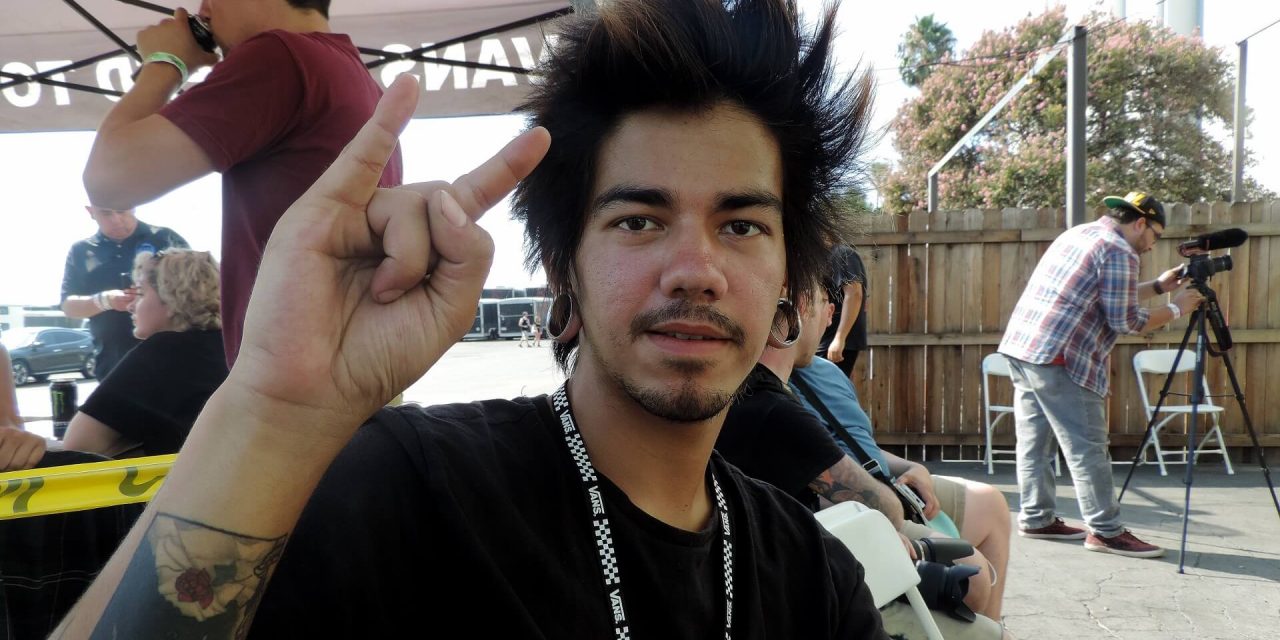 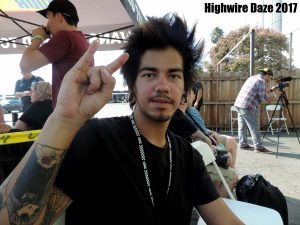 Chris George of Sworn In

It was a raging hot day at the Pomona Fairplex in Southern California, and the Vans Warped Tour was spinning to its conclusion.   Performing the entire summer on the iconic festival was the one and only Sworn In, unveiling superbly impassioned live shows in support of their All Smiles magnum opus – available on Fearless Records.  Highwire Daze Online caught up with Sworn In’s drummer Chris George in the press area on the very last day of Warped to discuss their summer on the road, experience at Mayhem Festival, the recently issued All Smiles album, and a whole lot more!  Read on…

Introduce yourself and tell me what you do in Sworn In.
I’m Chris and I play drums in Sworn In.

How’s Warped Tour been going so far and what have been some of the highlights for you?
It’s been going really well, it’s the last day. It’s all a blur to me, nothing has really stuck out but there’s been a lot of awesome shows. I just can’t remember which ones were which at this point, honestly. [laughs] there’s been so many. This is the longest tour we’ve done in maybe ever. Like, seven or eight weeks.

What in the world could prepare you for a tour this long?
A lot of mental fortitude and just – you literally have to brace yourself for it. At the beginning it’s all good, but after 5-6 weeks, you gotta really hang in there. But there’s nothing you can do to prepare, you just gotta – I mean we had to make sure of course we practiced and everything, stuff like that. We have to prepare on the musical side but then mentally you have to prepare a lot. Be prepared for a lot of sitting around and a lot of hard work.

Mayhem Festival, what was that experience like and did you get to meet Slayer or King Diamond?
We didn’t get to meet anyone from Main Stage because they were so separated on Mayhem. They were all up on the main stage and we had our stage and it was pretty like – everyone lived in their own world. But it was still a good fest, I was happy with it. We just didn’t get to meet that many people from main stage. That’s fine. It would have been nice, but oh well. It’s fine. 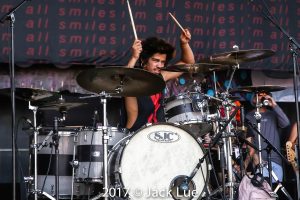 Compare doing Warped to a regular club date or club tour.
Club tours – we do a lot better in the dark, honestly. We’re kind of like a heavy darker emotional band. It’s metal, you know, seeing a bunch of dudes out in the sun, everything is all bright and the music is all dark. It doesn’t necessarily fit. So on the club tours I think we shine a little more on club tours.

Is there any overall story or concept behind the CD title All Smiles?
It’s more so like Tyler handled all the lyrics. It’s more his concepts on that. But generally the CD is about de-personalization and basically just coming to terms with the parts of yourself that you hate and – generally that sort of vibe and those sort of topics.

How do you think All Smiles compares to the previous albums?
I think of All Smiles as the best thing we’ve done  – we’ve experimented a lot with our sound, so taking all of the sounds we’ve done and taking the best parts of it and putting it all into this one.

Who produced it? What was it like working with them?
It was Kris Crummett. He’s over in Portland and  it’s the first time anybody has actually produced us a little bit. Most of the time we’d always go in and they don’t make any changes. Nobody has really – no outside person ever wrote our music or had any influence on it. This time we let him – for the first time ever in our history, OK let’s try this out and see how it goes. He did some cool stuff, he’d double choruses, change parts to take some parts out. Small things and all we agreed it, the changes he made. It was a cool experience recording with him.

What drum kit did you take on Warped Tour?
It’s an SJC Custom Drums. It’s a maple and acrylic hybrid kid and – normally lights up but we’re on Warped Tour so I’m not gonna be doing that. But I like the kit, it’s just a four piece kit. Rack tom, two floor toms, kick snare. 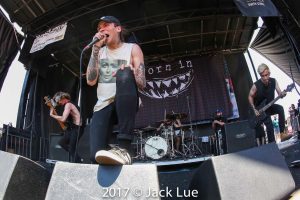 When you look back on the first album what do you think of it now?
I don’t really like it that much. I appreciate what it did for us – all the memories and nostalgia associated with it, I’m just ready for new music. I’m stoked on the new stuff.

What goes through your mind when a big tour like this is suddenly coming to an end?
I don’t know. I’m just stoked to get home. We’ve done what we need to do. We’ve done everything and it’s a sense of accomplishment and now I’m just ready to go home. I have a girlfriend at home, I live with my family and they have 6 cats in all.

What’s up next?
We’re going to Europe in November with Emmure. It’s the Never Say Die Impericon Festival Tour. It’s gonna be pretty cool, it’s our second time going to Europe. The first time we headline so this is a lot nicer to go back with Emmure who does really well overseas. I’m looking forward to it.

Any messages for your fans who are reading this now?
If you’ve been listening to the new CD, and if you’ve been sticking with us, then we appreciate you. We’re a very experimental band and some people appreciate that, some don’t, so the people who do we appreciate it back. 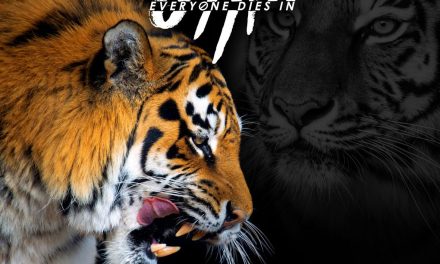 311 at The Hollywood Palladium – Live Photos