The Babys: Absolutely Timeless and Still Crushing It Today

The Babys: Absolutely Timeless and Still Crushing It Today

The music and overall legacy of The Babys remains absolutely timeless and treasured among their worldwide fan base – songs such as Isn’t It Time, Back On My Feet Again, Midnight Rendezvous, Every Time I Think Of You – these and so many other classic selections bring back those rock and roll memories and are still being played on the radio airwaves today.

What many longtime fans are just beginning to discover is the very fact that The Babys have indeed returned in an epic way!  The Babys recently unveiled a new album entitled I’ll Have Some Of That and are on the verge of issuing Timeless: Anthology II – a recording that fans could still participate in via a Pledge Music campaign!  And if you are in the Southern California area, The Babys are ready to rock your world with two local live shows – December 28th at Saint Rocke in Hermosa Beach and December 29th at The Coach House in San Juan Capistrano!

Highwire Daze Online recently caught up with The Babys vocalist/bassist John Bisaha for an interview a few days after their sold out show at world famous Whisky A Go Go!  Topics of interest included their vibrantly energetic live performances, Bisaha’s first meeting with founding members Tony Brock and Wally Stocker, the upcoming  Timeless: Anthology II entreaty, and whole lot more!  Read on and rediscover The Babys…

How did your recent show at The Whisky go and what were some of the highlights?
We just had that show last Saturday, it was a great show. The Babys hadn’t been back at The Whisky since they started. It was over forty years since The Babys had been there. Great crowd, a lot of fun energy, we had a great time with it. Highlights? The crowd was cool, the people (at The Whisky) were cool, it was good working with those guys.

Tony Brocks’ solo, that’s my highlight of the night. Tony’s solo was amazing!  We do “Looking For Love” towards the latter part of the whole set. So we’re playing for an hour and a half/two hours, and then Tony’s doing a drum solo after that song. After that song, you know that songs a cluster trying to get all the syncopation and the cowbell and all the other stuff it. He just kicked it!  My highlight was Tony’s drum solo for the night.

You’ve got two more shows coming up here in Southern California at Saint Rocke and the Coach House. What can one expect from these upcoming shows?
If you haven’t seen a Babys show, we’re now back into the fifth year of doing this, which is pretty cool, you’re gonna see and hear basically the classic Babys’ tunes.  Virtually The Anthology Record, all the greatest hits, some deep cuts, played with a lot of energy. So there’s a lot of energy we bring to the table – beautiful, and a lot of soul. We keep all that but we add a little extra punch. So you’re definitely going to feel the energy.  You’re not going to sit on your hands that’s for sure.

How exciting or maybe challenging has it been to pursue Timeless Anthology II?
It’s been both. It’s been very very exciting. When we were approached by Tony Valenziano – he runs Pacific Studios and said: “Hey I’d really love to you know to see if we can put together some sort of proposal to get you guys into my studio.” And we’d been toying for a while about potentially doing a live record. We’ve got a bunch of (live concert recordings) from several different shows, so there’s some good stuff that we can edit and maybe do a live record at some point.

But what we really need was an ability to have a calling card – a current today calling card – when we put together promos, sizzle reels, and things like that. You know, it’s forty-year-old music. So a lot of it will have (John) Waite’s voice on it. So we really wanted to have something that had the current lineup today. The songs as we play them today with the vibe that we play at today.

It was very easy to come up with songs.  I think we play virtually ninety-five percent of the songs and we brought a couple of the songs that we’ve done in the past. Like, Not Ready to Say Goodbye, which was the first song that we recorded when we got back together, but didn’t really make the I’ll Have Some of That record. And there was another song called, When Life Goes Right, that we also recorded for I’ll Have Some of That. It didn’t make that record either.

So it was a great experience. We’re virtually done with it. Everything’s pretty much mixed, everything except two or three songs are mastered and just waiting for the Pledge Music campaign to finish.

What was the experience like doing this release via Pledge Music?
It’s very easy to set everything up – the crowd sourcing campaign. The thing is really getting the name out on it. Having people understand that there’s a Pledge Campaign going on. You can socialize this through Facebook or Twitter and the typical socials, and you’ll reach the 12-15k people that we’ve got on that, but we need to reach a million people. That’s the hard part. So we’re trying to work with Pledge to see if they’re going to open up their mailing list to get it out to the people that fit our genre of music that have no ideas The Babys are putting out a new record. If we can get it out to those people, then that’s going to help things quite a bit. So far I think we’re about 20-30% of the number, which isn’t too bad. We’re extending things through Christmas and maybe putting up some new incentives to be able to get in on the pledge, but by and large, we need to still get the name out there. I still think we’re the world’s best kept secret. So that’s still the #1 target, trying to get the word out that there’s a new record.

What were your impressions of original members Wally Stocker and Tony Brock when you first met them?
I first met Tony through my audition. I had a friend who called me up and told me that The Babys were looking for a lead singer.  So I got to meet Tony and I went through about 3-plus months of auditions.  Tony is a kind English gentleman. Very nice, very well spoken, great manners, just a beautiful guy. My first auditions were really all about singing  at first. They were basically, really good quality karaoke tunes that they did so you can get the feel of it. That’s basically what I sung, those 8-9 times I went back. But at one point, after the first audition, Tony came to me and said: “Hey I hear that you play bass too.” So I said: “Yeah, I haven’t played bass in a long time but yeah, I’m a stock rock bass player, man. I’m not Geddy Lee, I’m not Jocko. Just stock meat and potatoes.” So he goes: “You know The Babys songs, do you think you could handle those?” I said: “I probably could.” I had The Anthology record on my Iphone, so I would listen back to the songs. I live about 2+ hours away from Tony, so after going home and listening to The Anthology record, I figured maybe 85% of the songs at least I knew where they were probably going. I then needed to get out my bass and figure out what the keys were- but I knew straight on, I was able to play it. The biggest challenge was playing it and singing it.

My first meeting with Wally was when we were recording Not Ready to Say Goodbye and we were in the studio. Wally at that time was living in Florida. So we flew him in on a whirlwind for three days -we had him (basically) two days in the studio. Another beautiful, kind, English gentleman.  Never played with him, obviously, before. We’d had a lot of the songs tracked, but obviously we didn’t have Wally on it. We had a lot of the guitar pieces, everything was pretty much in there.  And then the first time Wally listened to the tracks, he came up with the lead lines – “the bits” as he calls them.  And that’s when the song became a Babys tune, just by the licks Wally threw in. We have the girls, we have the horns, we’ve got the strings and now we’ve got Wall! It was just amazing!

So meeting the two of them, obviously a dream come true because I was a big Babys fan back in the day but, oh my gosh, just the greatest pair of guys you’d ever want to meet. It’s what makes it really, really cool. We’re doing this now for five years and we still like each other, which is a great thing!

What excites you the most about bringing The Babys legacy to life for long-time and newer fans?
The fans (and I was one of them) – back in the day when Jonathan (Cain) left and then John (Waite) decided to go solo. It was kind of heartbreaking, right? Because The Babys were right there on the cusp of greatness. They were opening up for some great acts – Journey / Alice Cooper / Cheap Trick and others. They were doing their own headlining and they were doing great.  They really needed that next record and they were right there and I think they were recording that next record. The whole contract was for five records. They did the 5, but they were doing the 6th and on that 6th record were the beginnings of three songs that Journey made very very great. “Don’t Stop Believing,” “Faithfully” and “Open Arms,” started out with Cain in The Babys and they were recording those. So imagine if that (6th) album had came out with those songs on it. They’d probably have not broken up. Who knows.  But for me the beauty and the benefit is knowing that coming forward some 30+ years later, the music is still timeless. That’s why we’ve called this record Timeless because it fits right in, because we’re playing the greatest hits. That’s why we went to Timeless Anthology Vol. II.

But, these Babys songs beg to be played and we do them justice – we didn’t want to half-ass it. We needed to bring the girls back, we needed it to still have strings and horns in there. We want to track that, right? We want to make sure it’s covered so that you’re not missing anything when you hear that. The only thing you’re missing is maybe that original singer, and I like to think that I do a more than credible job – and I bring my own piece to that which adds a little more energy to it, and a little more rock to it.  I think it’s what propels us with that energy going forward. I think it’s just a match made in heaven and that’s why I’m so happy that we’re still doing it. That’s the #1 reason why I’m here.

I guess the icing on the cake, for me, is these two guys who I idolized and was a big fan of back in the day – now they’re really friends. They’re best buddies. We’re a big tight knit family and to be able to see and give them the opportunity to be playing these songs that they made famous 30 years later is really, for me, what it’s all about. They’re absolutely still crushing it today… Against The Grave at The Viper Room – Live Photos 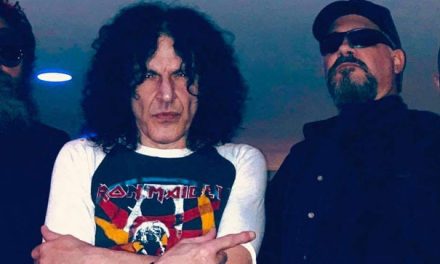