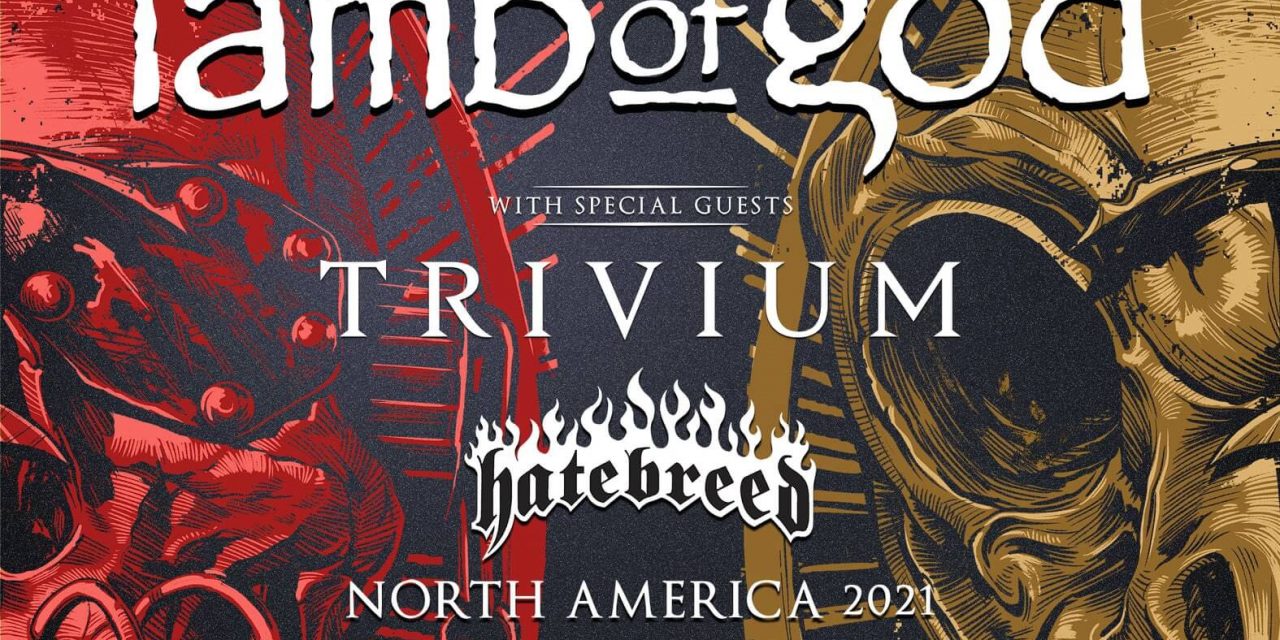 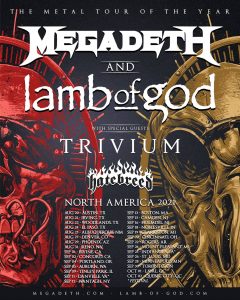 Tickets On Sale Now at LiveNation.com

In just over a month, the must-see Metal Tour Of The Year co-headlined by MEGADETH and LAMB OF GOD will lay waste to cities across North America as the highly anticipated trek finally hits the road. Joining them as previously planned will be special guests TRIVIUM, however it has been announced today that due to international visa issues, special guests IN FLAMES will not be able to join the tour. Fans should not fear, joining the tour in their place will be none other than HATEBREED. Tickets and VIP packages for this most epic metal extravaganza are on-sale now from LiveNation.com.

MEGADETH, fueled by Dave Mustaine’s triumphant return to the stage following his diagnosis and recovery of throat cancer, will finally embark on their first North American tour since 2017. Speaking on the long-awaited announcement of the rescheduled run, MEGADETH’s leader and frontman, Dave Mustaine says,

“Can you hear that sound of armies on the march – of destruction on the horizon? That’s this tour, coming for you. We cannot wait to return to the stage and I promise you you do NOT want to miss these shows. You’re not going to know what hit you!”

LAMB OF GOD pressed ahead with the release of their crushing self-titled album, Lamb of God, which was one of the best- selling metal albums of 2020. The band now looks to take the show on the road as they return to the stage for the first time since the release of the record. Randy Blythe, inimitable frontman of LAMB OF GOD, adds,

“It’s been far too long since we got together to do our thing— by ‘we’ I mean bands, road crew, bus drivers, truck drivers, local venue staff, vendors, audience, parking lot attendants, the freaking janitors- the whole damn enchilada. ALL OF US. TOGETHER. Everyone has been waiting, but the time has come to put the puzzle back together— I honestly don’t think I’ve ever been more ready to hit the road with lamb of god. See y’all in a few months with Megadeth, Trivium, & now Hatebreed. Over a year with no live music? These shows are gonna be INSANE…”

Produced by Live Nation, the epic, rescheduled tour will now kick off on Friday, August 20th in Austin, TX and hit a further 27 cities before wrapping in Quebec City, QC on Saturday, October 2nd . Full tour itinerary below. 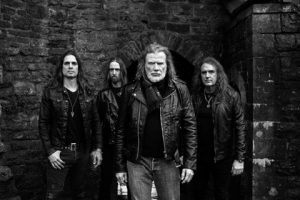 It was over 30 years ago that Dave Mustaine founded MEGADETH, in the process pioneering the sound that would become known the world over as thrash metal. And from the very beginning, the band proved to be the most lethal and audacious unit on the heavy music scene, pushing thrash to the limits of musical ferocity and instrumental virtuosity on early efforts like their 1985 debut, Killing Is My Business…And Business Is Good! and 1986’s seminal Peace Sells…But Who’s Buying?.

MEGADETH have taken their place as one of metal’s most influential and respected acts—not to mention among its most successful. They have gone on to sell more than 38 million albums worldwide, earning numerous accolades including a 2017 GRAMMY® Award for “Best Metal Performance” for the title track “Dystopia,” 12 GRAMMY® nominations, and scoring five consecutive platinum albums. With sheer determination and a relentless recording and touring schedule, MEGADETH worked their way up from headlining clubs to headlining arenas, festival and stadiums, cementing a legacy that continues to grow and spread throughout the world. MEGADETH are slated to release their 16th studio album later this year. LAMB OF GOD propelled heavy metal into the new millennium two decades ago with the prophetically titled New American Gospel. They followed with 2003’s As the Palaces Burn, which made the Rolling Stone list of the Top 100 Greatest Metal Albums of All Time. Ashes of the Wake, released in 2004, was the first LAMB OF GOD album to be certified gold by the RIAA, as was 2006’s Sacrament, which also made a Top 10 Billboard 200 chart debut. In 2009, LAMB OF GOD released Wrath, their first with Josh Wilbur as producer, and earned the number one album spot on Billboard’s Hard Rock, Rock, and Tastemaker charts, with a number two position on the Billboard 200.

Those number one positions were repeated with 2012’s Resolution, which swung effortlessly between thrash, traditional metal, sludgy doom, with flashes of crust punk swagger and bravado. LAMB OF GOD’s last album, VII: Sturm und Drang (2015) made its debut on the Billboard 200 at number three and finished number 2 in the world charts, reaching Top 5 in five countries and six additional Top 15 positions.

In 2020 LAMB OF GOD released their critically acclaimed self-titled opus, the band’s best work to date, featuring new drummer Art Cruz, LAMB OF GOD is re-energized and unrelenting, ready to lay claim to the metal throne. 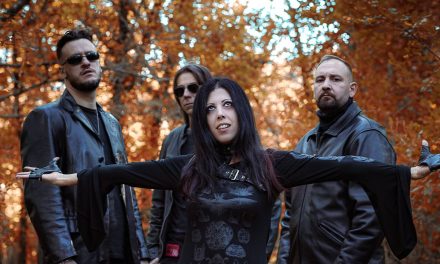 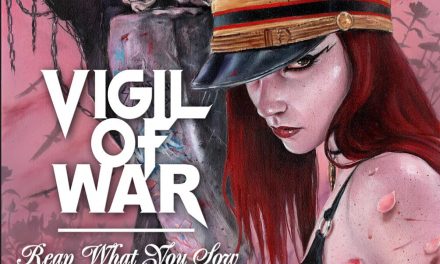 Myles Kennedy at The Troubadour