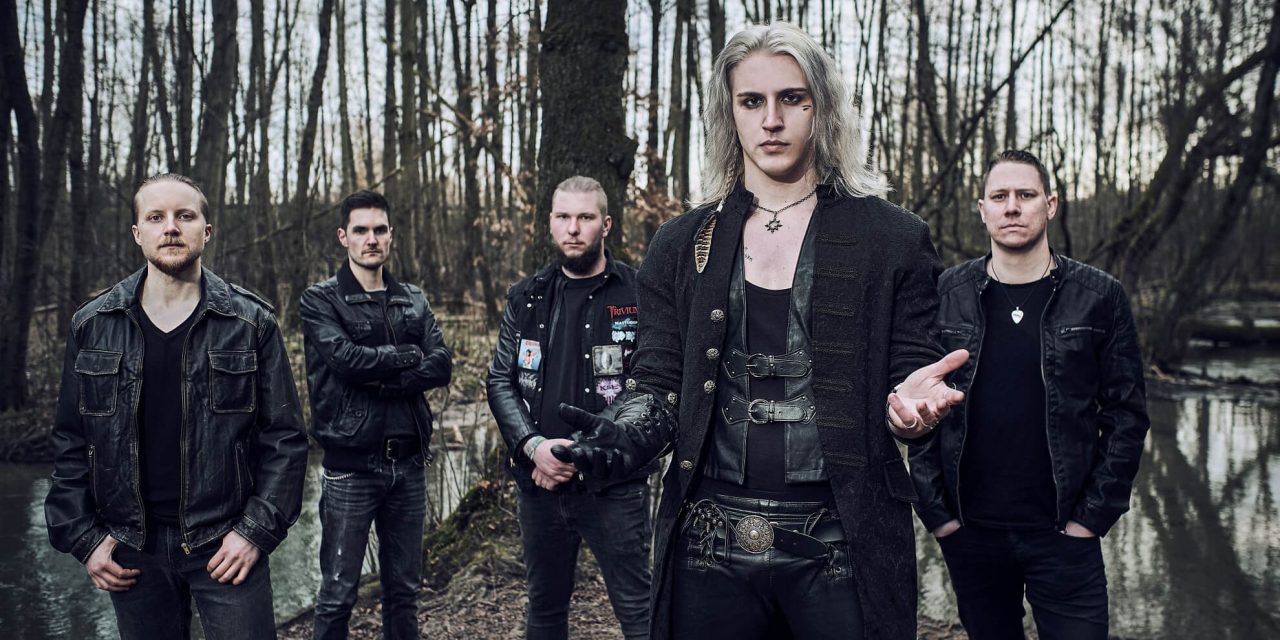 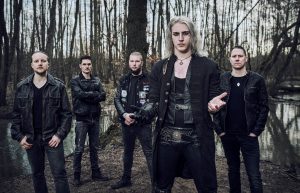 The mighty Reinforcer from Germany combine classic heavy metal with an epic power metal approach and take the listeners on a journey full of dual lead guitars and heroic melodies.  Prince Of The Tribes is the name of their debut full length magnum opus, now available worldwide via Scarlet Records.  Highwire Daze recently caught up with Niclas Stappert, lead guitarist and founding member of Reinforcer, to find out more about the amazing band on the rise and their inspiring power metal reveries.  Read on…

Introduce yourself, tell me what you do in Reinforcer, and how long the band has been together.
Hi Ken, I’m Niclas, lead guitarist and founding member of Reinforcer. Bassist Marvin and I started the band back in 2015 but it was a hell of a journey and took us two years until we had the perfect line-up. This line-up hasn’t changed since then, so I guess it was worth the wait. After our first EP in 2018 we are more than happy to finally have our first full-length album out now.

Where is the band based out of and what is your local music scene like there?
We come from the small city Paderborn in North Rhine-Westphalia, Germany. The local music scene is quite cool. Not a huge number of bands but all of them really talented and we have a pretty nice Heavy Metal community here.

How did you wind up signing with Scarlet Records?
Well, actually everything happened the “old school” way. After finishing the recordings, we sent our album to different labels all around Europe. The responses were quite good, so we ended up having more than one offer. Scarlet turned out to be our first choice though. The communication was great and from the first contact we had the feeling that the label and we were on the same wavelength. Scarlet has an excellent marketing and distribution, exactly what we were looking for.

Is there any overall story or concept behind the Prince Of The Tribes title?
No, there is no overall story, and it is not a concept album. Each song stands for itself and tells a story from a different era in human history. Most of them are based on real events but others are fictional like Shieldmaiden or Hand on Heart for example. 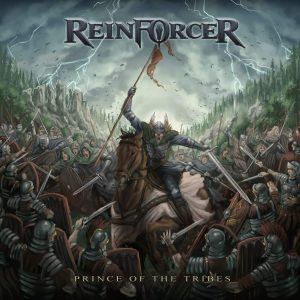 Select two songs from Prince Of The Tribes and what inspired the lyrics.
Well, I think we should start with the title track then. It tells the story of Arminius, the prince of the Germanic tribes who defeated the massively superior Romans in the famous battle of the Teutoburg Forest. Since this battle took place in the area where we come from, every kid here knows this story about the little man competing with the almighty enemy. No question we had to sing about this guy. A typical Reinforcer song about an important historic event.

A good example for a fictional story on the other hand is the song Shieldmaiden. A story about a warrior who loses the love of his life in battle and is now suffering and thinking about the great fellowship they had. Quite unusual for us to deal with such a “love story” but it fits the mood of the song really well.

Who produced Prince Of The Tribes and what was it like working with them?
We recorded guitars and vocals in the local Room89 studio in Paderborn with producer Ruschi, who had already done the recordings and the mix for our EP. We know each other quite well so it was a really nice and relaxed atmosphere. For drum recordings, re-amping, mix and master we chose the famous Kohlekeller Studio near Darmstadt this time. Big bands like Powerwolf or Aborted have recorded there and we had the pleasure to work with Kai Stahlenberg as our producer. An absolute professional but down to earth guy. As one can here, he did a fantastic job producing such a powerful but at the same time organic sound – exactly what we wanted. Besides, we had a great time together in the evenings when the work was done, having BBQs with a couple of beers and great talks. I could not think of a better working environment.

Who did the cover art for Prince Of The Tribes and how much input did you have on it?
For the cover artwork we chose the German artist Hendrik Noack again, who already did a great job for our EP “The Wanderer”. It is simply awesome to work with Hendrik. You tell him your idea and he instantly knows what you want. We explained him the overall concept and had some little suggestions here and there but basically, we gave him plenty of rope and he delivered once again.

What was it like working on an album in the middle of a pandemic?
The most challenging part was that we couldn’t see each other regularly. Everybody had to prepare his parts alone at home. For us, this way of working wasn’t too unusual though. We are not that kind of band that works on their songs in the rehearsal room, we usually share our ideas digitally anyway and then get together right before gigs. It would have been cool though to play the songs before the recording and adjust some things here and there but that wasn’t possible. So, there are three or four songs on the album that had never been played together by the whole band before they were recorded.

What could one expect from a live Reinforcer show?
100% handmade Heavy Metal. No backing tracks, no metronome, no keyboards – only amps cranked up to eleven, thundering drums and a crazy Logan Lexi with microphone and sword in hand. Pure passion, blood, sweat and tears!

What was it like playing the Metal Inferno Festival in 2018 with Grave, Holy Moses, Dew-Scented and so many other bands…?
It was a really impressing experience, especially because it was one of the first Reinforcer shows. Always great to share the stage and hang out backstage with such metal veterans. We had dinner sitting next to the guys from Grave, unbelievable that they had already started playing Metal before all of us from Reinforcer were born. 😀

If Reinforcer could open for any band either now or from the past, who would it be and why?
For me that is not a difficult question. It would either be Judas Priest or Black Sabbath. These guys are the inventors of Metal and especially Priest is not only my favorite band, but also a big influence for me as a songwriter for Reinforcer. It would be a tough question though if it should be Sabbath with Ozzy or Dio. Ronnie is our singer Logan’s biggest hero, so I think he would go for that Line-Up. We both prefer Sabbath with Ozzy and Dio as a solo artist though. As a German band it would also be cool to open for the Teutonic legends Accept one day. I think by far the most realistic choice. 😀

Are you involved with any other bands or projects outside of Reinforcer?
At the moment none of us is involved in any other project. I have more than enough work with Reinforcer, but Logan, Tobi and Lasse have played in other bands now and then. Due to time and other reasons all these things came to an end somehow though. But we will see what the future brings. Everybody in Reinforcer is free to do what he wants as long as it is not affecting our work.

What’s up next for Reinforcer?
Hopefully, we will be able to finally get back on stage soon. As every musician out there, we really miss playing live. One festival in Hamm, Germany is still on the bill for November 2021, and we eagerly hope that this thing is going to happen. Besides, we will soon start writing new music for the next album.

Any final words of wisdom?
There should always be the time for a good vinyl and a cold beer!

Thank you for taking the time to answer these questions!
You’re welcome. It was great fun! 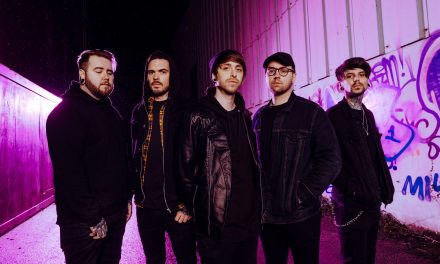 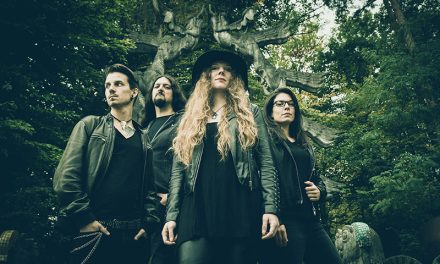 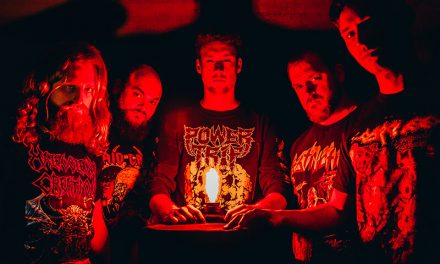