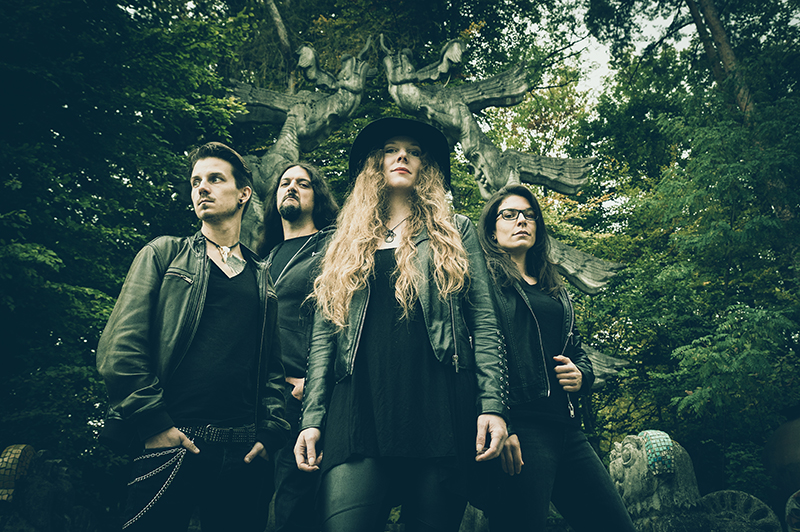 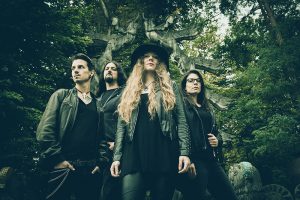 Wazzara present grand sonic artistry with their own spirited brand of enchantment and intensity, and their debut full length Cycles is absolutely wondrous to behold.  Founded by Barbara Brawand  formerly of Caladmor, Wazzara’s stunning amalgamation of metal and shoegaze render their sonnets a vibrant adventure that will enrapture the senses.  Highwire Daze recently caught up with Barbara right after their show opening for Dreams In Fragments to find out a whole lot more about this Swiss collective and their bewitching moonlight metal.  Read on…

Introduce yourself, tell me what you do in Wazzara and how long the band has been together.
Hey there! My name is Barbara, and I am the founder of Wazzara where I compose, sing and play the second guitar on stage. The main guitar part is done by Mäsi, the bass is played by George. They both joined the project in 2020 and thus helped me fulfilling my dream to form a full band out of Wazzara, my former solo project. Live drums are played by Deniz Lebovci while the drums for our new album coming by end of October were played and recorded by Dordeduh drummer Andrei Jumugă.

Where is the band based out of and what is your local music scene like there?
We are based near Zurich in Switzerland. Although the country is very small there is a great variety of metal bands here – some of them quite famous – and lots of very talented musicians. And beautiful, dedicated listeners, the most important thing for all musicians.

Is there any overall story or concept behind the album title Cycles?
We are taught to live our lives in a linear way – you know, we see it everywhere: in the economy where they tell us about endless growth, in career plans etc. I believe this is a big misunderstanding, to say the least. I believe that everything runs in cycles, as we can see when observing nature, for example the moon. Nature teaches us that the end is always a beginning and vice-versa. This simple truth has eased many of my personal struggles, but on a more overall level Cycles is a tribute to death always being birth and birth being death. There is so much power in this simple truth. 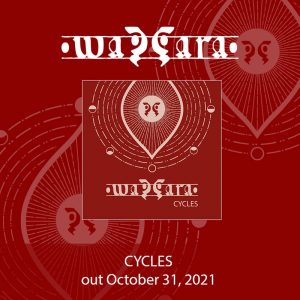 Select two songs from Cycles and what inspired the lyrics.
“Ancestral Bonds” processes a personal experience that has affected my childhood and life in a strong way. It’s about a dysfunctional relationship in connection with denial and mental abuse and the process to deal with this experience.

“Solanum“, on the other hand, is shaped like a spell and dedicated to the victims of the witch hunts, whose names mostly have not been rehabilitated to date. It is a message with a strong feminine energy that tells the oppressors that they can try, but they will never succeed in killing this very energy.

Who produced Cycles and what was it like working with them?
I am not only very happy to have George in the band as a bassist, but also as a producer. He has a very good feeling when it comes to what works in songs and what does not. Once I finished writing the songs, I passed them on to him and he made proposals for adjustments – sometimes only small ones and sometimes quite radical ones – that definitely put the songs on a higher level.

We then sent the demos to Andrei. We are so lucky that he agreed to play the drums on this album as he is just an excellent drummer. Andrei understood our vision right away and, in my opinion, it is due to his contribution that the songs have this special groove and feeling.

We then asked Lewis Johns at The Ranch Production House in Southampton to do the mix. We heard some of the mixes he had done for other bands and straight away knew that he would be able to realize what we were looking for: Having the sound not too clean while still on a top-notch acoustical level. He absolutely nailed it. Lewis also contributed to the production by giving very helpful feedback concerning the songwriting.

For the mastering we didn’t have to think long: Jonas Ekström was the man to go to! He already did the mastering for Wazzara’s EP and my former band Caladmor’s album “of stones and stars” and with Cycles he managed again to put this certain brilliance to the outcome that we’ve wished for.

So, working with everyone involved was very pleasant and also easygoing. The best you can wish for when making a record.

What was it like to write and record Cycles in the middle of a pandemic?
While the recordings weren’t affected because we did them in our homes anyway, I agree that the writing process was a bit more difficult because there wasn’t many impressions coming in to be processed, because simply not that much happened and we all were forced to stay at home and didn’t collect new experiences. So first I felt a bit too empty to create, but fortunately after a short while I was back in the flow.

What was the experience like opening for Grift and was that your final show before the pandemic?
I felt very honored to being asked to open for Grift. I admire Erik’s music a lot and so it was no question whether to say yes or no. I remember the week before the concert very well: It was this one week when suddenly all the governments were speaking about a potential lockdown which then was imposed in Switzerland only two days after the concert. So, until the very day the show took place I didn’t know if it was really going to happen. For a lot of people attending the concert – this is what I heard afterwards – the evening with Grift and Wolcensmen was the last concert they’ve seen for a long time.

How did your show with Dreams In Fragments go and what were some of the highlights?
The show went very well, thank you! It was beautiful to play the very first time with the full band and seeing them all being so dedicated. A big shout out here to drummer Deniz – he had to learn all the songs in a very short time as he was going to replace Julia who had to quit as a session drummer due to lack of time – and he did great! The audience was also very beautiful, and we had a great time backstage with the members of Dreams in Fragments. So, we couldn’t have wished for a better start as a full band.

If you could open for any band either now or from the past, who would it be and why?
I know this may be a disappointing answer – after having played with a lot of bands in my past I concluded that I don’t care what band it is, as long as they are nice people. Having to share the stage with people that are an absolutely pain backstage is the most unpleasant thing about playing gigs.

Are you involved with any other bands or projects outside of Wazzara?
I am involved in isôt estrange – a dark ambient project I founded together with outstanding harpist Karen van Rekum. And I deliver some vocals for George’s metal project Between Giants from time to time.

Cycles is being released on Halloween. Did you select that date for any special reason and what is your favorite Halloween memory?
Oh yes, I did. 😊 This date fits the concept of dedicating the album to nature’s infinite cycles very well – I love Halloween, and I think this feast is a very playful way of dealing with old beliefs. But most of all I chose this date because in Celtic tradition it is believed that on Samhain night the gates between the worlds of the living and the dead are open wide. It is like a new cycle’s turning point where the beginning meets the end.

What’s up next for Wazzara?
We are still busy setting everything up for the album’s release in two weeks. You know, this album only exists thanks to all the lovely backers in our crowdfunding earlier that year. Now it is our turn to say thanks to them and sending out all their well-deserved goodies.
After the release I want to compose a new album for which I already collected some snippets and ideas. And – most importantly – we plan to play more live shows.

Any final words of wisdom?
Don’t forget that everything is flux, all the time. 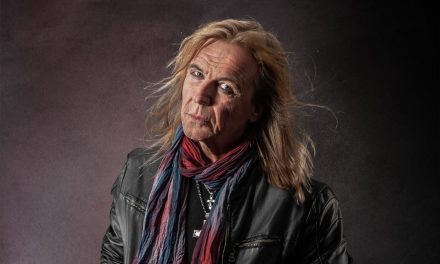 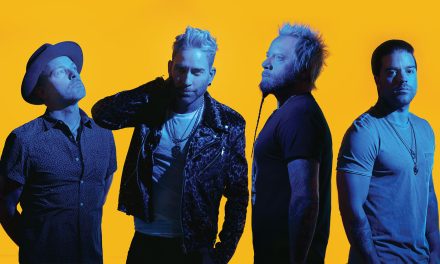 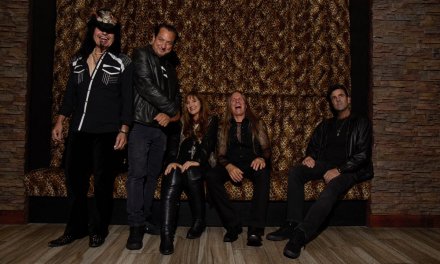 The Guess Who at The Canyon Santa Clarita – Live Photos