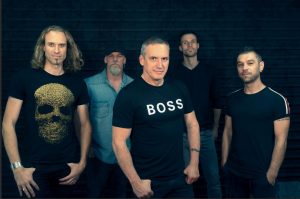 Introduce yourself, tell me what you do in Heart Line, and how long the band has been together.
Hello, I’m Yvan Guillevic the composer, writer, guitarist and producer of Heart Line.  Heart Line was born in 2020, so it’s a fresh group, but all the musicians are very experienced.

Where is the band based out of and what is the local music scene like there?
We are based in France, all along the West Coast, we are not very close in distance. France is not a « rock country », it’s difficult to promote here, but at the same time there are a lot of rock fans. The problem is about the big medias, radios and TV’s don’t really program this music style.

How did you wind up signing with Pride & Joy Music?
It was a very simple process. I sent to a dozen of labels the album, and 6 days after Pride & Joy Music sent me an email, they were very
impressed by the album, so they wanted to work with us for a release. I received 3 propositions of different labels, P&J M was definitely the best offer, and it’s a famous label in this style of music in Europe.

Is there any overall story or concept behind the Back In The Game title?
Not really, but I wanted to do an album who pays tribute to my musical roots, which grew in the 80’s. All these fantastic bands like Foreigner, Journey, Whitesnake etc..  In my mind I tried to compose an album which could be a Soundtrack of an 80’s movie. 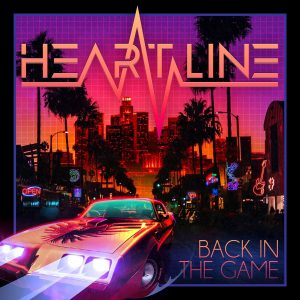 Select two songs from Back In The Game and what inspired the lyrics and/or music.
It’s a very difficult question.. maybe « Fighting to live » who was inspired by «Rocky 3 », a story about a fighter who must win if he wants to be a champion again, he’s prepared to die on the ring and his trainer pushes him to fight with the good spirit (I’m a huge fan of Martial Arts and all the forms of Boxing, so I understand this particular way of thinking). And « On Fire » because I wrote this song for my wife. It was my state of mind the day I met her 😉

Who produced Back In The Game and what was it like working with them?
I produced the album. It was during the lockdown and the curfew in France. So every musician sent me his parts (except with Emmanuel, we went to a studio for tracking the voices) and I organized and produced all the songs in my own studio. It’s very easy to work with them because they are very professional and talented. Each musician has the « hand » on these parts to improve them. I composed the songs but I let a maximum of space to the musicians, it’s very important. Emmanuel (vocals) composed all his melodic lines and all the backing vocals.
For the lyrics I wrote 4 songs, Emmanuel and me 3, Anne Sorgues 3 and Yasmine Kid 1.  After all these steps, Jorris and I mixed the 11 songs.

Who did the cover art for Back In The Game and how much input did you have on it?
Stan W Decker, a fantastic French artist who works with a lot of bands (Blue Oyster Cult and many, many more) and labels (Frontiers, Pride etc..). I just told him that I wished a car, and a city in the night. He did all the rest. It’s exactly what I wanted!

You have three different members from Shadyon involved with Heart Line. How did they become involved with the project and as far as you know, is Shadyon still active?
I knew Jorris and Emmanuel since a gig where they opened with Shadyon for one of my bands (PYG) few years ago (in 2012 I guess). I formed a band with Jorris maybe 2 or 3 years later (the band is stopped nowadays) and I told to Emmanuel that one day I would contact him for a project because I felt that he could be perfect for this music style. I had a bassist (Dominique works with me in the band YGAS) so it only missed a drummer, Emmanuel told me that Walter can be the good choice, and it was true. So Heart Line was completed.
And yes, Shadyon is still alive, they work on the third album.

Has Heart Line ever played live or plan to do so in the future?
We want to play live! And we will in 2022! We also work on the second album.

If Heart Line could open for any band either now or from the past, who would it be and why?
Good question! I’d love to open for Whitesnake or Def Leppard!

Are you involved with any other bands or projects outside of Heart Line?
Yes I have a Soul/Blues band called « YGAS » with the singer Anne Sorgues, who wrote 3 song’s lyrics on « Back In The Game », we made 2 albums. And I have a Pink Floyd tribute band called « Empty Spaces » since 15 years. I’m also in « United Guitars », which is a collective of guitarists in France, we’ve had international guests like Gus G, Franck Gambale, Doug Aldrich. We made 2 albums, and this year, on the third album, I composed a song where George Lynch himself plays a solo!

What do you hope 2022 brings for you and for Heart Line?
We want to go on stage and tour a lot! There is a lot of AOR/Melodic lovers around the world and we want to reach them.

Any final words of wisdom?
I wish to thank you and all the medias who spread the good words for this music style!

Thank you for taking the time to answer these questions!
Thank you Ken. It was a pleasure.

Pedals and Passion: An Interview with Adam Franklin of Swervedriver