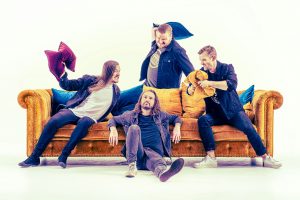 Degreed is a hard rocking band from Sweden who has issued Are You Ready, their sixth studio album – available via Frontiers Music Srl!   With the melodic reveries found within Are You Ready, Degreed is on track to enrapture the world at large with their sonic tapestries.  The band has toured with the likes of Pretty Maids and Eden’s Curse and are more than ready to hit the road once more in support of their amazing new album.  Highwire Daze recently interviewed drummer Mats Eriksson to find out more about the glorious refrains of Degreed, touring with the legendary Pretty Maids, another project City Of Lights which also had their album release on the same day, and a whole lot more…

Introduce yourself, tell me what you do in Degreed, and how long the band has been together.
My name is Mats Eriksson, I am the drummer of Degreed. We released our first album in 2010 and we’ve been around since 2007. We’re released our sixth album now Are You Ready.

Is there any overall story or concept behind that title Are You Ready?
No, it was just a song we started to write together – and later on Robin and I wrote some lyrics to it. And the chorus is “Are you ready?…” And that’s just how we came up with the name. There’s no concept behind the album or anything. It’s just some songs we wrote were nice enough to put on the album, so we haven’t thought about it anymore than just that.

Before we talk about some of the songs on Are You Ready, tell me about the stand alone single that came out before that was entitled The World We Knew and the inspiration behind it.
That was basically the first thing that we did on our own independently. The song is basically about the pandemic, and how much things have changed during the pandemic. It’s been quite a different experience than normal life for all of us. So, the song is basically about that and how we felt about it. So, we wanted to put it in a song and release something, because we hadn’t been able to tour on the previous album Lost Generation because the pandemic struck – and we just wanted to do something during 2020, so we released that song, so we had something to promote. Something to show our fans that we’re not laying on the couch watching TV – we’re trying to work as hard as possible with the music. 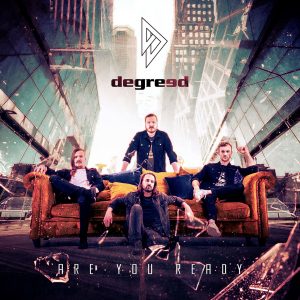 How has the lyrics and music with Are You Ready been influenced by the pandemic and all of the social unrest going on in the world today?
The other songs on the album had no particular thing in mind when we wrote them, I think. I can’t say that for all of the songs, because I hadn’t been included on the songwriting for all of them – but I think the songs that we’d written felt like the best songs that we’ve done so far. And I don’t think we thought about the pandemic while writing the lyrics for the album. But that’s my take on it – we really haven’t spoken about it, but I don’t think the others had any thoughts about the pandemic when writing for this album. It was more that particular song The World We Knew that was written about the pandemic. But there’s definitely some of our best work on this album, so in that sense it was good that we had time, because we weren’t able to go out and play live. We’ve just been in the studio trying out the ideas. You don’t even have to be in the same room these days when you try out ideas – changing lyrics and chords go real fast when you send it to each other. So, I think this album, since we had the time, is the best album we’ve ever done, especially when it comes to the lyrics. I of course have my favorites on the album, which are the title track Are You Ready, and the song Radio for instance. But I haven’t been included in all the songwriting, because we sent the material between each other, and everyone has been included in some way. But lyrically, maybe we’ve changed a few words where everyone was included, but normally it’s more split up. But I just think lyrically it’s the best album we’ve ever done and as I said I have my favorites and the other guys have their favorites as well. But it’s a fine album altogether – especially lyrically.

I actually listened to your back catalog on Spotify and was surprised you had so many amazing previous albums out. How does it feel that Are You Ready is your sixth album? Did you ever think you would get six albums into a music career?
No (laughs) it’s quite a few albums actually! But we’ve always gone into music – our view of things is that it’s supposed to be fun, which I think is the reason why we are here after six albums. We’re doing this because we love music, and it’s all fun for us. So, I think that’s why we have gotten so far, but I never thought anyone would release this many albums with us. That’s a blessing as well that we’ve had people around us which makes it fun as well – like our manager fixed all the deals with record labels. And now we’re working together with Frontiers – and I think that makes it more fun as well, because like you said, you hadn’t heard about us before – but now you’ve heard of us, and you’ve listened to the back catalog – and I think that’s basically because Frontiers has better reach all over the world than our previous record labels had. And that of course makes it more fun as well. But I never thought we would get this far – I thought I would be an old man by that point.

You’ve been on some pretty amazing tours, and I wanted to talk about a few of them. One tour that you did was with Eden’s Curse and Mob Rules. What was the highlight of that particular tour for you guys?
All the gigs were great, and the people were great, but hanging out with the Eden’s Curse guys – and the Mob Rules guys – they have a harder time with the language because they’re German and they don’t speak not so much English actually. German and Swedish are quite close, so we understood each other actually. But the Eden’s Curse guys are just amazing people, and it was really nice hanging out with them and being in their company. They took so good care of us – so I think that was the highlight – the friends we made. Of course, the gigs were amazing as well – and all of the people coming out to the gigs. 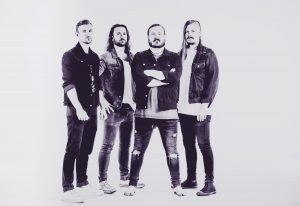 You also did a tour with your labelmates Pretty Maids a few years ago. What was it like touring with Pretty Maids and Ronnie Atkins?
First off, we were starstruck, because we’d been listening to Pretty Maids since we were kids, so that was a great honor as well. And Ronnie and Ken and the guys are also very nice guys, and they took really good care of us as well. They were fun to hang out with. Ken Hammer, for instance, he has humor – he’s a really funny guy. Chris Laney is also a funny guy. Chris, we knew since before – he’s Swedish and lives in Stockholm and the business is really small here – we’ve known him for a while. But it was amazing! And they sell a lot of tickets here in Sweden, so all the shows I think were sold out, so that was incredible. So, the highlight from that was probably Ken Hammer’s humor. And also, the fact that we got to play in our own country and the venues were sold out. That’s a big thing here in Sweden because it’s not so common that you sell that many tickets playing rock or heavy metal. It’s more pop here. So that was really fun.

Has Degreed ever played here in the States or would you like to do so in future days?
We haven’t – yet. We would love to. It’s every Swedish musician’s dream to go to the States and play music. Hopefully, we’ll get the chance in the future to come there. I love being in the States when I’m on vacation. It would be an honor to come over and play music and tour.

How did you become involved with City Of Lights and how ironic was it that both your albums are being released on the very same day?
Yeah, that’s funny that it got released the same day. We didn’t know that even, but that’s funny. We met Neil (Austin) when we played in London several years ago, and he came out to a show because a friend wanted him to come. He’s been a huge fan ever since – and he’s always so nice – he goes out to several shows when we play in the UK. He’s always happy and he’s a really nice guy. So, when he got in touch with me and Robin for the City Of Lights album, we didn’t hesitate a second – cuz we knew it would be fun and the songs were great. It’s just nice that he asked us. And that’s basically how that album came to life.

Would Degreed and City Of Lights ever want to do a show or tour together – or has that already happened?
We really haven’t really talked about anything like that – but now with all the restrictions gone and lifted, it’s now a possibility. But I don’t think anybody talked about it yet. But that would be great! We could tour together!

Is there any new Robin Red music on the horizon?
I think so – we haven’t really talked about it. I played drums on the last album. I hope he’ll choose me this time as well. Time will tell. But I think he’s writing at the moment and pre-producing for new stuff. I can’t say how long or how far the process has gone yet unfortunately.

What do you hope the rest of 2022 brings for you and Degreed?
Hopefully, we get out on the road now and play summer festivals and going on tour with another band would be great. I didn’t realize it during the two years of the pandemic, but I realize it now that I really want to get on the road and tour. So, I hope that will happen and that the album is well received and that we get to play new places. It would be great to get to come to the US for instance or Japan. But we’ll see…

Days Like These by Phil Martin’s Drive (MR Records)