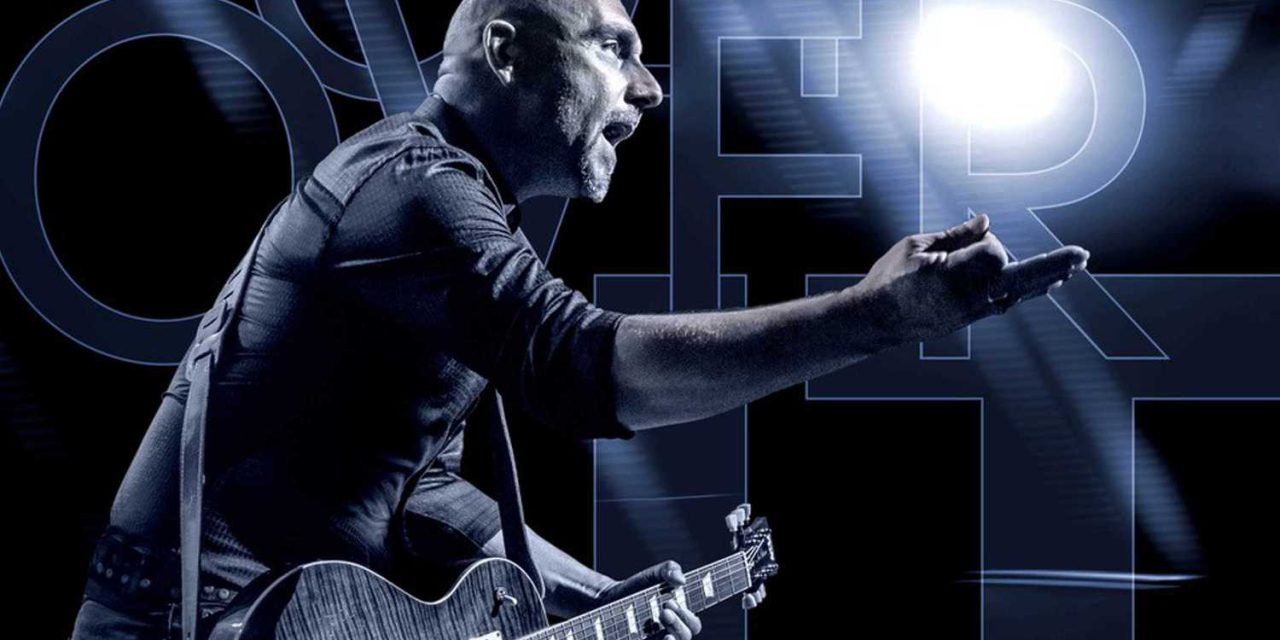 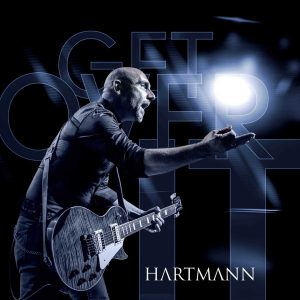 Oliver Hartmann has an epic amount of music credits from working with the likes of Avantasia, At Vance, Ronnie Atkins of Pretty Maids and more!  He has also amassed an impressive collection of solo albums under the moniker Hartmann, the latest being boldly entitled Get Over It – their 10th studio endeavor available September 16th worldwide via Pride & Joy Music.  Highwire Daze recently had the opportunity to interview the omnipresent Oliver Hartmann to discuss the creation of the very amazing Get Over It, his time currently spent within the ranks of Avantasia, working with Ronnie Atkins of Pretty Maids on his solo material, and more!  Read on as Highwire Daze gets over it all with the one and only Oliver Hartmann…

Let’s talk about the new album Get Over It.  Why did you call the new album Get Over It?  You almost look like you are saying Get Over It on the album cover.
In the end it’s quite simple.  I think I’ve had the same situation over the last two and a half years that every musician has had in this world who is a touring, live playing musician.  There was no chance to go on tour – no chance to play live shows, except maybe a live stream here and there.  So yeah, there was lots of time left for other things.  At a certain point there were two chances – otherwise you could stick your head into the sand and go on whining about the situation, or you turn the negative things into a positive situation where bands and musicians would find out that there was a lot of time now for concentrating on your projects – to get out of your hamster wheel and use this time for writing songs and for really concentrating on a project.  Because when I look back on the last 17 years of Hartmann, due to all my other projects and tours like Avantasia, my Pink Floyd tribute Echoes, and many other things – it was quite hard to really stick to a project for a long time like songwriting for Hartmann.  I always had like one week here and two weeks there or two days here and there – so this was really the first time I had the chance to concentrate just on the material for Hartmann – to get into a tunnel where you could really stay on a project and concentrate on that.  And this was really helpful.  So, in the end we had 25 songs and ideas – and we had time to check out old songs for some ideas that had never been finished or songs that hadn’t been used for the albums before.  So, in the end, I was trying to use the time that I had and turn the negative thing into a positive thing.  Like the album is called to Get Over It – to get over all that shit and try to find something positive in that.

This first single from the album is called The Gun.  Tell me about the inspiration behind that one.
Normally when I write lyrics, I’m not a very political person when it comes to making music.  Yeah of course – sometimes you watch the news – especially when we’re talking now about the US and what is happening there.  Everybody can have a weapon – a gun.  There are still many people in the US that are killed by having a gun – especially Black people who are killed way easier than maybe white people by the police in the States.  And this is what the song is talking about – it was about a young boy, growing up in a poor part of the city who’s getting a gun by his friends as some kind of braveness test – and he takes that gun.  And by a bad chance, he was shot by the police – just by carrying this gun.

Let’s pick another song – one of my favorites from the album is The Movie’s End.  Tell me a little about that one.
I think it’s one of my favorite songs on this album too – if I can say that because it’s really hard to judge your own music, because I can’t see it in an objective position.  But yeah – it’s a very cool song – it’s a very intense song.  The lyrics are talking about a man who has been left by his wife, but he’s trying to keep up that normal situation during his normal lifetime – when he’s going out meeting friends – meeting people – still smiling – not telling anybody what is really going on and what is really happening inside of him – and that it tears him apart.  And that’s what this song is about.

What was it like working with Sascha Paeth on this album?  He normally does a lot of metal albums.
Yeah, he’s well known as a metal producer, producing Avantasia, Kamelot Beyond The Black, and many, many other bands.  The first time we worked together was in 2002 – it was a mix for an album called Only Human by a German power metal band called At Vance.  During that time, I was only a singer in that band.  He mixed that album, and we got along very fine from the first moment – and we became good friends over the years.  Since the first album Out In The Cold – my first solo album in 2005 – he has always been the one that’s been mixing my albums. As I said, we’re friends – and it’s good to have him not only as a producer, but also as an engineer.  When I’m producing or pre-producing my songs here – everything is finished let’s say up to 90 percent – and it’s really good to have somebody on your side with a fresh pair of ears, and maybe some cool ideas that you can’t see anymore because maybe you’ve been in that tunnel for too long to stay objective.  So, it’s really great to have him as a producer, co-producer, and an engineer.  I’m always happy with the sound that he does. 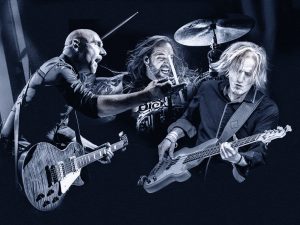 What was it like working with Ronnie Atkins – first on his solo album Make It Count – and then in Avantasia.
He joined Avantasia in 2013.  He’s a very cool guy.  I’m also a big fan of his work with Pretty Maids – I’ve been a fan of Pretty Maids since 14 ½.  I still have that first cassette tape here with the first two albums.  I really felt honored to be part of his solo album because, of course we’re friends and I knew about his health situation – and at the moment everything is fine and he’s over it hopefully.  From the first time we talked about that he was thinking about making a solo album, I said, “If you want me to be part of it with just some choirs or solos or whatever – not talking about money and no business things – I’m in!”  He likes my playing – I like his songwriting and his singing – so I really felt honored to be a part of these two albums.

And then how did you become involved with Avantasia and meet Tobias Sammet?
Well, that was quite a long time ago.  I think we just finished the first album with At Vance in ’99 – and I think a few months later he called me, and he said he listened to that album, and he liked my way of singing and my voice.  And he asked me if I wanted to be part of a new project that he was working on.  I knew him as the singer of Edguy, but we never talked before.  Maybe on a festival we met, but we really never had a chance to talk – and I said “Yeah, I’d be in!”  And he told me that he was asking a few singers – also Ronnie James Dio – and he denied to sing on these songs that he was asking for. He was looking for a Dio-ish voice in a certain register – so he asked me if I would like to join and sing in some choirs – also sing in parts of the songs Sign Of The Cross and Glory Of Rome.  I did that and we got along fine the first moment, because he’s a very funny guy and he’s a very talented musician.  So yeah, we did that – and nobody really believed how big and how successful Avantasia would become.  And nobody really thought that this would be something that we could put onstage together with all these singers.  And in 2008, he decided to bring it onstage with some different singers here and there – with a different lineup of musician.  And since then, I’m a fixed member of that live lineup.

When you look back on your days in At Vance and those albums you did, what do you think of them now in retrospect?
I think we did some really cool albums.  I especially like that album Dragonchaser – I think there’s some really cool tunes on it.  Also, the album Only Human – the last one that I did in 2002.  For me, it was after playing in so many bands before and singing in professional bands and cover bands – I was already a professional musician since I was 20 years old.  This was really the first chance to go out to people with the music on an international platform.  Nowadays when I look back – I mean we had our personal problems – that’s why I left the band – it was a great experience to get into the whole professional music business.  In the end, this was also the first step that convinced me to work on my own material and to start doing solo albums – which I did with Hartmann.

Would you like to bring Hartmann over to the States for a few shows – and have you ever been here in the States with Hartmann?
Unfortunately, not.  We’d really love to tour more than just Germany and Europe.  Hopefully, there’s a chance maybe next year or the year after to tour a bit outside Europe – and of course it would be great to also play the US.  We’d love to.

And do you have any messages for Hartmann fans here in the States?
Of course.  I want to say hi to all readers of Highwire Daze and to all fans in the US – you may know me from the band Avantasia – we’ve been also touring in the US.  We all hope to be in the US someday with Hartmann.

New Politics at The Hollywood Palladium

Dark Station and Dianthus at The Tiki Bar – Live Review