The legendary Stan Bush and his band made a rare appearance at the Whisky a Go Go on the Sunset Strip on a rock and rolling Saturday night. The occasion was an event entitled Soundtrack Superstars, and Stan Bush would be co-headlining with the one and only Robert Tepper. The team of Tepper and Bush are very well known for having hit songs placed in iconic movies back in the late 80’s and early 90’s. Robert Tepper’s song No Easy Way Out was featured in Rocky IV and another selection entitled Angel Of The City would be found within the Cobra soundtrack. Stan Bush also has an epic history of having his compositions in motion pictures, and many were very much on display within his superb 10 song set.

Before the movie mania would commence, Stan Bush and his stellar band treated the burgeoning Whisky crowd to songs from the recently unveiled Change The World solo manifesto. Opening with the rapturous title track Change The World followed by the glorious clarion call of Warriors, one could clearly witness an artist is at the very height of his creative prowess with the brand new material. Even the audience who arrived wanted to hear the hit songs appeared to be very familiar with the latest and greatest work Stan Bush has to offer the world the large.

Towards the end of set was when the cinematic magic would be unleashed, and what a grand performance this would be. Never Surrender from Kickboxer still possesses a vibrant sense of urgency and remains tremendous and inspiring in this present day. And the closing one-two punch of Dare and The Touch from Transformers: The Movie had each and every audience member singing along with a massive amount of passion and conviction.

For a much deserved encore, Stan Bush and his band performed the title track from his vastly underrated 2007 In This Life solo endeavor. Bush remains a vibrant, impassioned vocalist capable of sending these triumphant songs into stratospheric heights. An amazing performance from Stan Bush and his superbly rock solid band!

Of course The Whisky is very well known for featuring an eclectic array of opening bands when it comes to standout shows such as Soundtrack Superstars featuring Robert Tepper and Stan Bush. This particular Saturday night on the Sunset Strip would be no exception, and early arrivals were certainly in for a few unexpected sonic delights.

Benjamin Love from Chattanooga, TN is a solo artist beginning to cause quite a commotion, celebrating the recent release of his full length album The Star Shaker. Within a live setting, one notices right away Love’s movie star good looks and impassioned vocals unveiled within a tangled web of wondrously soulful rock and roll. Featuring intriguing songs and a stage presence that is nothing short of captivating, Benjamin Love is sure take on the music industry and gain a good amount of fans in the process. Unleashing a remarkable star making performance that The Whisky is notorious for; expect to hear a lot more from Benjamin Love in the future days ahead.

Playing in direct support of Stan Bush were The Swansons, and what a massive delight this collective was! Fronted by the husband and wife duo of Joe Finley on lead guitar and vocals and Angie Finlay on vocals and percussion, The Swansons enchanted The Whisky throngs with their superbly infectious brand of alt-country pop rock and roll. Country This is the name of The Swansons latest endeavor, and it has been quickly catching on with both music lovers and radio stations all across the country.

The clever interplay between The Finley’s is vibrantly endearing, and they definitely possess the memorable songs to set the imagination in flight. In addition to The Finley’s topnotch performances, each and every band member found with The Swansons’ brigade are seasoned musicians, bringing these wonderful songs to an ultra-vivid life. Even the most jaded of music critic will find a whole lot of auditory goodness when encountering The Swansons, their radiant live performance and overall good time tunes.

(Review and Photos by Ken Morton)

Vixen at The Whisky – LIve Photos

Between Kings Release Emotionally Triumphant Music Video For “The Escape” 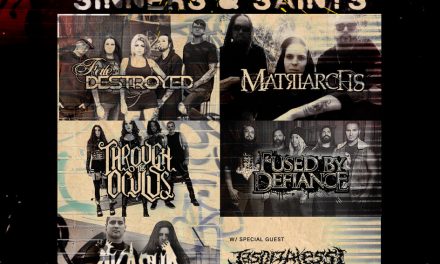 Sinners & Saints featuring Fate DeStroyed and Matriachs at the 1720