The Folk Noir Tapestries presented by Society Of Broken Souls

The Folk Noir Tapestries presented by Society Of Broken Souls

Society Of Broken Souls has been on an auditory adventure since 2015, presenting their folk noir tapestries upon the world at large.  Midnight And The Pale is the name of the brand new endeavor from Society Of Broken Souls, jammed packed with the wisdom and wonder of a this vast and unpredictable journey we all call life.  Imaginatively presented by the duo of Dennis James and Lauryn Shapter, Society Of Broken Souls is an intriguing manifesto, one whose reflective lyrics and vibrant melodies will absolutely captivate the senses.  Highwire Daze Online recently caught up with Society Of Broken Souls to discover a whole lot more about this duo as they prepare to travel the highways of America once again.  Read on…

Introduce yourself, tell me what you do in Society Of Broken Souls, and how long the band has been together.
We are Dennis James and Lauryn Shapter and we have been performing as Society of Broken Souls since 2015. But we’ve been playing music together since 2003. On stage, Dennis plays acoustic and electric guitars, drums, and harmonica; Lauryn plays acoustic guitar, violin, piano, and percussion. In the studio, we both play bass, and Lauryn plays banjo and viola.

Where is the band based out of and what is your local music scene like that?
We are in a small town in southeast Iowa. The population is under 10K but there is an incredibly vibrant music scene here, especially given its size. The depth and breadth of talent here is actually kind of stunning, plus there is a world-class listening room called Cafe Paradiso that attracts stellar acts from all over the country, as well as international acts. We’re pretty damn lucky, actually.

Is there any overall story or concept behind the album title Midnight And The Pale?
The album title is an excerpt from Lauryn’s song, “Fortuna.” Since so much of the gestalt of the band and our songwriting centers around embracing the entirety of life, especially the broken and dark places so much of society wants to shove under the rug, we thought the juxtaposition of those two elements represented the idea of the interplay of light and dark really well.

Midnight And The Pale by Society Of Broken Souls

Select two songs from Midnight And The Pale and what inspired the lyrics?
Lauryn: One of my favorite songs on the album is “Witness.” For me, it represents a lot of what our band is about, and that is the idea of honoring the entire journey of life. Sometimes when life gets brutally hard, what we all really need is someone to witness our story, to walk beside us through it all — not someone to fix things. We’re all going to hit some snags along the way and most often we really just need a witness.

Dennis: “Wings on a Prayer” was a different song for me in that it didn’t come to life the way most of my songs do. Usually, a particular lyric comes from out of nowhere and the rest just seem to be lined up behind it waiting to step forward. I’ve always felt like I didn’t write them so much as stayed quiet long enough for them to reveal themselves. With “Wings,” the opening line came to life (along with the suggested melody) the way most songs do for me — out of nowhere. But the rest of the song came from what I felt was asking to be evoked by it. And rather than the rest of the lyrics lining up and waiting their turn, they all seemed to be shuffling their feet wondering what to do. There’s a clear message of surrender. And while surrender is not something I normally oblige, the idea of this surrender did. It’s topical for us in that we’re coming back to music later in life and we’re only able to do so by way of surrendering. Surrendering to the call of music and letting go of the security of straight jobs. Surrendering to the call of music because it’s just stronger than anything else to us. I’m grateful to feel like I belong in music but while any creative endeavor offers its own rich and satisfying rewards, they also moonlight as borderline abuse. The pursuit of the muse, the pursuit of the craft, these are things that require a tenacity to muscle through the parts that give you fits. Surrendering to the call of that pursuit in spite of those challenges requires intention. So, we know what we’re getting into by returning to music and we know what’s at stake for us in doing so, and I feel like I wrote this song as means of self encouragement.

What could one expect from a live Society Of Broken Souls show?
A wide sonic and emotional landscape. With two songwriters, we share lead vocal duties and we each bring our own sensibilities to our songs. We have enough instruments on stage for a seven-piece band — including piano, multiple guitars, fiddle, a snare drum, and a bunch of auxiliary percussion — and we use them all. You might hear an introspective and intimate song with acoustic guitar, fiddle, and sweet harmonies, or more rebellious and jubilant songs with electric and acoustic guitars. We love pairing the electric guitar, especially the baritone, with the fiddle, too, and use a lot of auxiliary percussion and porch board basses to fill out the bottom. And a sense of humor — in spite of our name, we bring a lot of humor in between the songs. That light and dark thing.

If Society Of Broken Souls could open for any band either now or from the past, who would it be and why?
Wow. That’s a tough one. There are so many bands we admire and would love to see up close like that. If we could build a time machine so we could open for The Band, that would be pretty amazing.

What do you think makes the duo of Dennis James and Lauryn Shapter work so well together?
We have complimentary skills with just the right amount of common ground. Dennis was a drummer first so rhythm is a strength for him while Lauryn has such a keen grasp on melody from piano and violin. We both play multiple instruments so we can create a wide landscape together. And language is so important to us both. We’re both avid readers and love the way words and music play together to make the whole greater than the parts. In the end, we cover a lot of ground. We also get along so well, which serves us when we’re living out of a 21-foot RV for weeks at a time. We met later in life and so along the way we developed pretty decent communication skills and our relationship has benefited from that.

Any strange or scary happenings on the road or at a show?
We were staying in a pretty nice neighborhood in Annapolis one time and didn’t lock the door of the RV. At about 4:00 in the morning, someone opened the door. Lauryn thought it was our host, Dennis thought it was Lauryn, but Maisie, our 17-pound mutt who sleeps tucked between us, knew it was neither. Her fierce little bark scared off the intruder. Definitely was a wake-up call to always lock the door, no matter how nice the neighborhood. We don’t really think whoever it was meant us any harm, just looking for an opportunity, or maybe even a place to rest. Either way, we were very grateful for our little watchdog.

Tell me about the 22 year RV you purchased – does the RV have a name and how comfortable is it for cross country touring?
It’s a 1995 (so now it’s 23 years old!) Winnebago Rialta. The Rialta was a limited partnership with Volkswagen and so we affectionately call her Fraulein. It really is a dream come true, even with all the little aches and pains it has. It’s perfectly suited to our needs; we can fit all our gear in the front section, thanks to Dennis’s engineering and ingenuity. We can sleep in it, shower in it (short showers!) and cook in it, plus it fits in a city parking space. It gets great mileage for an RV and feels more like a large van. Great visibility, lots of light, and just super comfortable. We’re saving a fortune on hotels and restaurants, plus we’re always “home” no matter where we’re parked. We have our own mobile green room wherever we are, and we can bring our mutt Maisie with us, since it feels like it’s a second home for her. And with about 400 pounds of gear, we now have one less round trip carrying it all — no more schlepping it into a hotel at two in the morning and back out again the next morning on too little rest..

If the music of Society Of Broken Souls was a donut, what kind would it be and why?
Well, it definitely wouldn’t be one with a whole lotta sugar or any kind of high-fructose corn syrup. We did find a recipe for a bourbon bacon donut, so yeah, we guess that’s who we’d be. A few spurs, a little bite, a little salty, and a touch of sweet. That’s us.

What’s up next for Society Of Broken Souls?
More of the same: write, record, tour, rinse, repeat. We’re jumping into this game way later than most emerging artists, but we can’t ignore what we believe we were put on this planet to do. We love making music together, we love being on the road (LOVE being on the road), and we figure we have to make the most out of this one life we’re given. So we’re going for it.

Any final words of wisdom?
Find what speaks to your heart and find a way to do it. As long as you still have life in you, you’re never too old, it’s never too late, and your voice and your contribution in this world matter. Speak your truth and don’t worry about what others think. 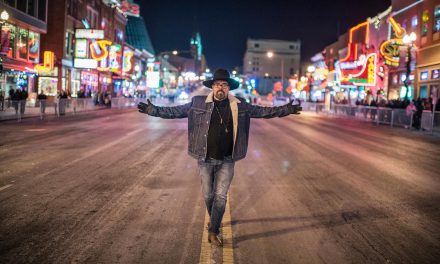