The Seventh Annual She Rocks Awards: On The Red Carpet with Terri Nunn, Lisa Loeb, and Nita Strauss

Nita Strauss live in She Rocks!

The Seventh Annual She Rocks Awards: On The Red Carpet with Terri Nunn, Lisa Loeb, and Nita Strauss

The Seventh Annual She Rocks Awards rocked the House of Blues Anaheim on January 25, 2019 on the weekend of The NAMM Show. Hosted by the Women’s International Music Network (the WiMN), the gala celebration featured a star-studded array of honorees, including Terri Nunn of Berlin, Lisa Loeb and Nita Strauss, as well many other women from all corners of the music and audio industry.

Highlights included guitarist Nita Strauss performing Queen’s “The Show Must Go On,” and Lisa Loeb performing her #1 song “Stay,” which was featured on the Reality Bites soundtrack, with the Command Sisters.

Highwire Daze Online secured a space on the She Rocks Red Carpet this year, and conducted interviews with Terri Nunn, Lisa Loeb, and Nita Strauss prior to the event. Join us on the Red Carpet as we chat with the three She Rocks honorees…

What does it mean to you to receive this award from She Rocks?
It’s really such an honor to be here and be not only standing among these incredible women, but actually to be getting an award for it is very surreal.

How did your recent tour with Angel Vivaldi go and what were some of the highlights?
It was incredible! Just being out there, playing my own music, and getting to play songs that really meant something to me – I’ve been touring for a very long time, and to get to play songs that I really put my own heart and emotions into – it was really meaningful.

The name of your album is Controlled Chaos. What do you mean by that title?
Controlled Chaos is kind of a statement about how there are two ways you can handle all of the chaos that goes on in your life, in your mind, and in everything around you. You can chose to be overcome by it or you could choose to control it and make something great out of it. And that’s what I tried to do with my album.

And what’s up next for you?
I will finish out doing some more touring in support of Controlled Chaos and then I’ll go back out on the road with Alice Cooper starting in June.

What does the She Rocks awards mean to you and how did you become involved?
They asked me to become involved and invited me years ago – and I liked the idea because I love bringing people together in an industry where – especially bringing women together in an industry that is dominated by men. Although I don’t like separating myself out as a woman in an industry, I do think it strengthens the community and it strengthens the people in the community to support each other. And it helps to put focus on self-confidence – and it’s also a great message for younger people.

Your latest album is called Lullaby Girl and there’s some covers on it. Did any of the artists you covered hear or comment on it?
They did! I actually sent the Fleetwood Mac song to Mick Fleetwood and he loved it. I know that Rainbow Connection – that Paul Williams loves our version of it. Also the guy who wrote Be My Baby – he listed to it and he thought it was really cool.

And tell me about the new album.
The new album is something I’m working on right now and I can’t really talk about it a lot till it’s out. But I am working on it.

And complete this sentence. If I have to play Stay (I Missed You) again live, I’ll…
I will make 25 cents and I will be very happy!

How did you become involved with She Rocks and what does the She Rocks Awards mean to you?
It’s huge for me because it’s an honor from women – and women in music are what inspired me to do this at all. They changed my life. So to be part of this and to be noticed is just a huge deal for me.

Your last album Animal came out in 2013. How close are you to recording new music?
It’s coming out in May. It’s a new album called Transcend Dance with the original Berlin. John and David and I.

Is there any story behind the title Transcend Dance?
The song which we named the album after – Transcendence – it’s about my mom’s passing. And I asked her as she was passing what it felt like – and I wrote a song about what she said to me. And it’s Transcendence. She said “everybody thinks this is bad – I’ll miss everybody here, but this is not a bad thing – this is amazing. It’s like an adventure.”

And will you be doing any touring and playing these new songs?
Yeah! Yeah!

And you were once up for the part of Princess Leah in Star Wars?
Yeah, you could see the audition up on YouTube.

Do you ever regret not getting the part?
No, not at all! Because this wouldn’t have happened. Music was what I really, really wanted to do. I wanted it so much it scared me. So other things were happening and I was like “Okay, I’ll do that.” But if those things had happened, I would have never pursued music. And 40 years later – this is our 40th Anniversary this year.

How does that make you feel? 40 Years of Berlin!
Grateful. Grateful that I’m still doing it.

Find out more about the event and the organization at thewimn.com.

In The Slam Pit with Los Angeles Punks MANIAC 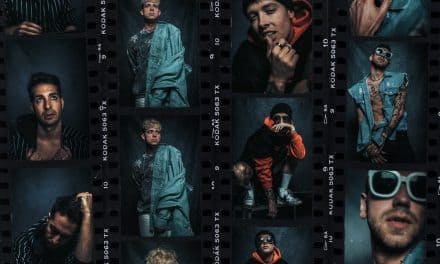 Fearless Records Signs Not A Toy

Alter Bridge and Nonpoint at The Wiltern