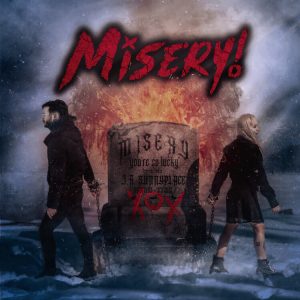 Misery Loves Company released the rock-solid Love Notes And Highways on Revival Recordings in 2017, featuring the wickedly infectious Dead And Buried. After heavy touring and a few lineup changes, the band has dropped the Company and has been rebranded as Misery! After unleashing some absolutely compelling singles, the mighty Misery! now unveils XOX upon the great big world – and what an absolutely exhilarating comeback from a band ready to take their post hardcore legacy into the next great and glorious chapter. Six dark, absorbing and ultimately inspirational selections may be found within the ultrasonic world of Misery! and it’s one that music fans will want to revisit time and again.

Opening with the devastating refrains of A Sunny Place For Shady People, Misery! amp it all up into overdrive almost immediately, exuding a massive amount of emotion and conviction in the kickoff. “I’m/You’re so broken and it’s so obvious,” are among the musings presented in the powerful Clover, leaving quite an impact on the listener with its memorable melodies and starkly personal lyrics. Everything Is Fine exhibits a sense of urgency with its heartfelt delivery and mixed clean vocals/screams slamming into the heart of the matter. 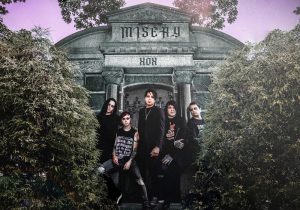 It’s time to meet The Obsessionist on the fourth track, and it’s an auditory encounter than permeates the senses. “It’s so tragic, I’m an addict,” is the commencement as journey towards Willow In The Woods, seething with its stark “sorry for the air I breath” inflections burning into your memory. And the closing out the XOX experience is the impassioned H.O.P.E., with “I’m sick of people looking at me like I’m nobody” crashing into a “I hope it works out for us” denouement of cautious optimism. This final track also features XOX producer Ricky Aremillino of This Or The Apocalypse infamy on guest vocals.

New front man Gabriel Perez exudes a ton of charisma and passion, his vocals sending the anthems soaring into the stratosphere. Equally inspiring performances are to be experienced from the rest of the Misery! lineup as well, including Joey Galligan on guitar, Mikey Williams on guitar, Joe Mascio Jr on bass, and Jesse Smith on drums. Created in the midst of the Covid-19 lockdown, XOX by Misery! is a gripping manifesto from a band we’ll be hearing a lot more of in the months ahead. Fans of My Chemical Romance and Crown The Empire especially need to check into the world of Misery!

Be sure to catch Misery! now on tour with the one and only Eyes Set To Kill!  And watch for our interview with Mikey Williams and Joe Mascio Jr of Misery! coming very soon to Highwire Daze Online!