Encountering Gods Of Tomorrow with Herman Frank of Victory 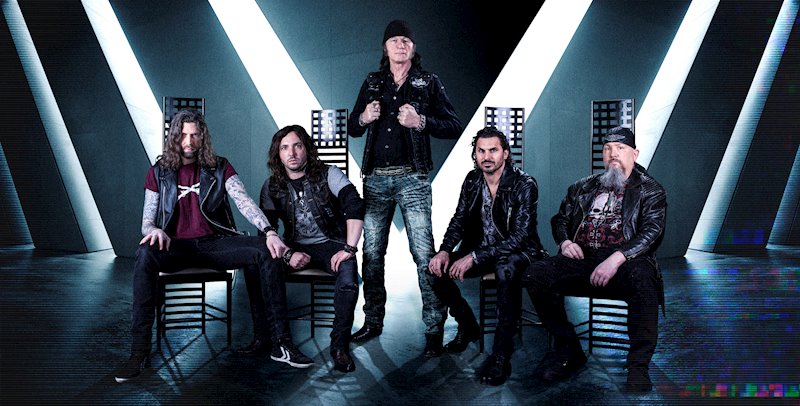 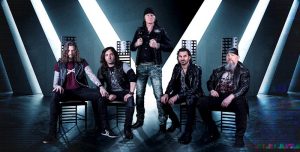 Encountering Gods Of Tomorrow with Herman Frank of Victory

Victory has unleashed Gods Of Tomorrow, their first album of raging hard rock in a decade, now available worldwide via AFM Records. Featuring founding member Herman Frank on guitar and vocalist Gianni Pontillo of The Order amongst its membership, Victory has presented unto world the thrilling next chapter to their already massive legacy. Highwire Daze recently interviewed the one and only Herman Frank to discuss the Gods Of Tomorrow masterwork, his recent solo album Two For A Lie, his times spent within the ranks of Accept, and other topics of intrigue. Read on…

Let’s talk about the brand-new Victory album. Is there any overall story or concept behind the album title Gods Of Tomorrow?
Oh, sure there is. The whole world knows that Gianni Pontillo the singer and me know that we are the most famous poets in the universe. (Laughs) Gianni came up with the title. The main meaning behind it is if we go on like this in our lifestyle for the next 20-30 years in the same way, we’re going to be surprised – everything will be going bad and getting worse and worse. Everybody’s waiting for any cause for outside the universe or from somewhere – from any political people – just to tell us what we’re going to do and stuff like that. And we don’t think that’s the right way. I guess we have to do everything by ourselves, so everybody should be the Gods Of Tomorrow and handle his own fate and handle his own opportunities to make the best living out of it.

It’s been a decade since the last Victory record. What made you decide that during a pandemic would be the perfect time to release a new Victory record?
(Laughs) It’s not cuz of the pandemic. 2 1/2 years ago I was looking, and the older singer Jioti, he got problems with his voice, and one day he went to visit a doctor. He was the singer, but he never practiced, and he’d go from zero to 200 every day he would start singing. So, he got problems with his voice – with his throat – and one day he visited the doctor, and the doctor said, “Oh, you better stop right now guy, or you’ll lose your voice totally. You may not even be able to speak anymore.” So, he had to stop, and I was quite down. So, I was looking for a couple of years around for someone who could replace Fernando Garcia and Charlie Huhn and Jioti – I mean these aren’t the worst singers anyway. So, it was quite difficult to find somebody. I tested a few singers, but it didn’t work out as well. And then all of a sudden 2 ½ years ago I played a show with my solo band Herman Frank at a festival in Germany. I entered the venue, and I was listening to a band I had heard. And said to Michael “That’s a good band! Who’s this?” And so, I watched the whole show – it was The Order – that was Gianni’s original band – and after he finished the gig, I immediately started talking to him about the Victory thing I had in mind. And he said, “I’m very pleased and interested and honored.” So, I sent him a couple of playbacks from the classic hits from Victory – Temples Of Gold and On The Loose and stuff like that – and he sent them back two days later. And I said to myself “My goodness, that sounds like Fernando Garcia and Charlie Huhn in one person.”  It was obvious, so I said “Okay, let’s do it!” 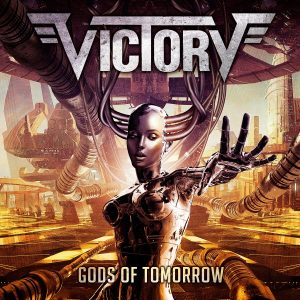 At this time, we had decided to do an anniversary tour of the Temples Of Gold and Culture Killed The Native albums, because they had been the most successful. But then Corona showed up. And we said we have such a great singer with such a great voice, it might be worth it to write a couple of songs and come up with a new CD or something. So, it happened. We started writing songs, and after a few songs it was so easy for me to write all these riffs and all these songs in the style of Victory. It felt like yesterday. So that’s the reason why we came up with the album. The tour had been cancelled and festivals had been cancelled. And then we and the record company decided we were going to release this album right now in November.

How do you think this new album Gods Of Tomorrow compares with the classic Victory releases?
The most successful Victory albums have been Culture and Temples Of Gold. And at best, this album is in the same style. I tried to keep the face of the two successful albums in this album and I think we succeeded. But it’s sounding way more modern and with the same freshness as these previous albums. That’s maybe because we have new members in there. I’m really proud of this thing. For me it’s the best and as good as the successful albums.

How would it feel to do a tour with Victory and The Order on the very same bill?
Nah! Never do that. I really would split all of these different bands – it really doesn’t look that good. If Victory is going on tour, we’re going on a headlining tour. I don’t want the singer to blow out his voice when he’s doing a supporting show. Nah, that’s not good. That’s a little bit strange for me. I could easily do a festival – Gianni’s band The Order, my solo band Herman Frank and Victory or vice/versa. That would be one thing. But each for his own.

I’m So Excited by The Pointer Sisters is a cover from the previous Victory album Don’t Talk Science. What made you decide to cover a Pointer Sisters song?
Actually, I did this song for an album that I did with my wife Martina for Poison Sun. I did this cover and I said this has such a good drive and is such a good song. Jioti heard this version that I did and said we should do this! It’s gotta be a rocker! So that’s the reason we decided to do this because it turned out good – like a rocky metal version of the original.

Do you still keep in touch with Charlie Huhn who is now running around the world in Foghat?
Once in a while he gives me a comment on Facebook, and I give him a comment. But I haven’t met him in a long, long time.

I interviewed Charlie from Foghat a few years ago and he told me he loved his time spent in Victory.
He is a such a great singer and he’s a nice guy. But it’s much easier for him, because he likes to do this blues rock thing and I think he fits perfectly into Foghat. 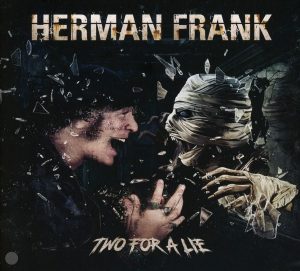 Your recent solo is album is titled Two For A Lie. What does that title mean to you?
The title was coming up in my mind – I met so many people in my life and I have to say that a couple of people have lied to me – especially in this kind of business I work in. But you could also say in the normal society and especially for politics – if there’s two people, there’s mostly a chance that somebody is lying to you. And when I came up with this title, I got this cover in my mind – the good guy and the band guy – the Ying and the Yang.

The guitar Michael in Victory also appears on Two For A Lie. How did your collaboration with Michael come about?
He’s very good – very talented. He’s a couple of decades younger than me, but he still has the same vibe in his hands when he plays guitar. But he’s able to copy my style mostly, perfectly – and the best thing is that he’s also living in Hanover, so I get a chance to practice with this guy. And he’s got really great ideas – he tells me “Oh Herman, you should do a different thing that’s not your style.”

Do you still keep in touch with Udo Dirkschneider?
Once in a while. I mean, now he’s not living next to me. I guess he’s mostly living on this little island on the Mediterranean sea. Maybe I’ve got a chance when he goes on tour, that I will visit him at a concert. But it’s not like where we’re talking on a phone or Zoom every day. He’s doing his business. I’m doing my business.

And what do you think of the modern day Accept and the work you did on those albums with Mark Tornillo?
It was great fun. Mark is one of the nicest guys and a real gentleman and I do love his voice. And I never would compare Mark to Udo and Udo to Mark because they’re different guys and different vocal styles. But I respect Mark – when he has to cover Restless and Wild, Balls To The Wall or Princess Of The Dawn – he is doing it really, really good. So, I give my most respect to Mark Tornillo, but also, I give my respect to Udo because he’s the original one – he came up with the voice. the melody. Personally, I never compare. It doesn’t make sense to compare two different singers to each other.

You were also on the Sinner album Touch Of Sin.
Oh my God, how did you find out?

I researched all your credits, and I thought this guy Herman Frank is on everything!
A week ago, my daughter said “Oh, daddy, are you in Wikipedia?” And I said “Maybe.” And then she said, “Oh daddy, then you are famous!” And I said “Maybe, kind of.” But you’re right, I did one album with Sinner – Touch Of Sin.

What do you think of A Touch Of Sin in retrospect?
It was great fun and still really good songs. I’m still proud of it.

Are you currently involved with any other projects outside of Victory and your solo album?
Kind of. Why did I expect this question? In these couple of months, I’ve been working on a couple of songs with David Reece. And Donnie Van Stavern from Riot is on bass – and Francesco Jovino – he played in Primal Fear, and he was the early drummer for U.D.O. He’s going for the drums. And right now, we are writing songs, collecting material, and going back and forward about songs we are going to do. Sooner or later there might be an album. (Editor’s Note: According to Blabbermouth, this project is going to be called Iron Allies.)

So that’s like three Accept singers you’ve worked with!
Yeah! So, I got them all! That might be a good album title. I Got Them All!

Do you have any messages for Victory fans here in the States?
Hope to see you all again. I wish to so bad to come back for a couple of shows with Victory to the U.S. I promise I go for Los Angeles, New York, Dallas, and any big town! 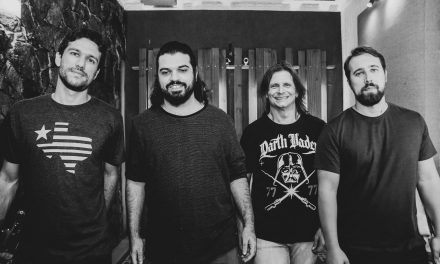 Royal & the Serpent at The Fonda Theater – Live Photos