Crystal Ball: Beyond 2020 and Into the Age of Crysteria 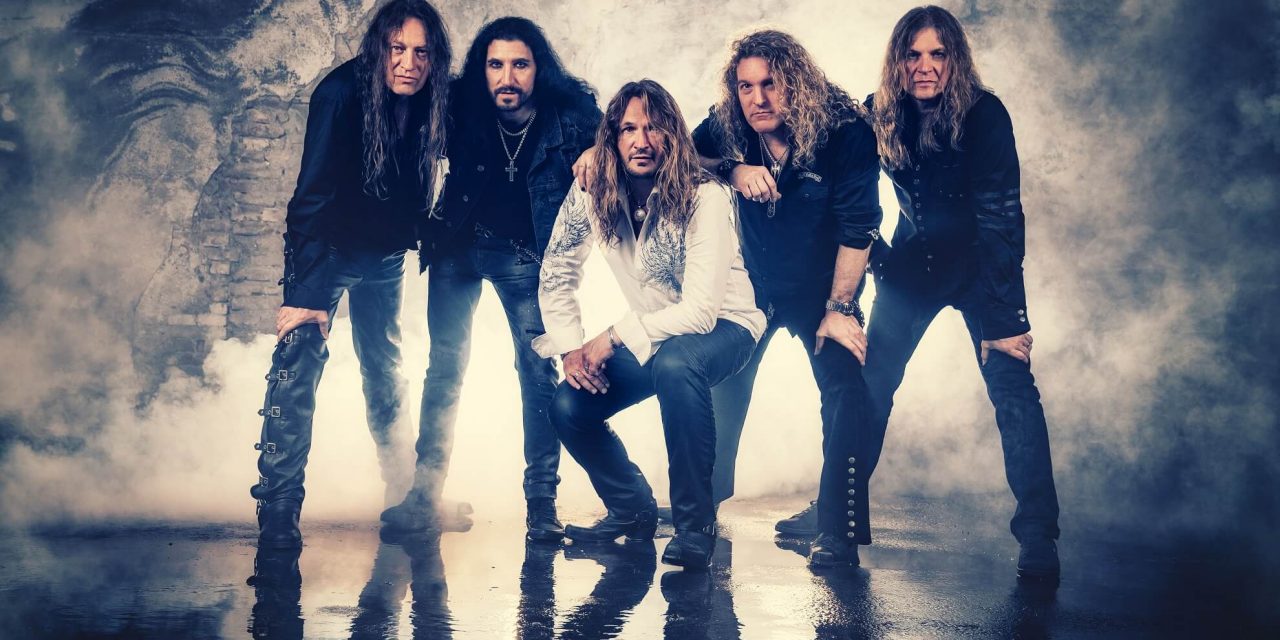 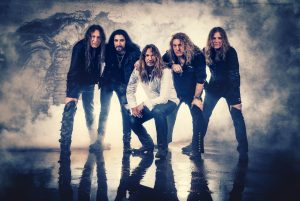 Crystal Ball: Beyond 2020 and Into the Age of Crysteria

Crystal Ball has returned, ready to launch into their third epic decade of melodic rock and metal.   These Swiss legends recently unleashed Crysteria upon the world via Massacre Records, and it’s certainly a rock-solid way to kick off the New Year.  Crystal Ball’s first endeavor since their career defining 2020 Greatest Hits collection, Crysteria presents the next grand and glorious chapter from this iconic collective.  Highwire Daze recently interviewed founding member Scott Leach to find out more about the auditory visions of Crysteria, working with producer Stefan Kaufmann of Accept and U.D.O. on this and their many other albums, collaborations with the likes of Jaded Heart and the omnipresent Ronnie Romero (Michael Schenker, ex-Vandenberg), and a whole lot more!

First of all, Scott, how does Crysteria compare to the previous Crystal Ball albums? It’s been a while since new original music.
That’s right, Ken. Well, I think this is one of our best efforts so far. I mean, maybe that’s “says every musician about the latest record.” In this case, I feel really and also from the feedbacks that we’ve got so far. It’s maybe not the best, or maybe one of the better or the best ones we did so far because as artists we evolved, and we learn every time. We’ve been doing it a while, so I hope this really pays off.

When you release that previous album 2020 in 2019, did you have any idea at all that the year 2020 would turn out to be so crazy, and then it would be a while before you would be active again?
No, not all, of course. I mean, 2020 came out in 2019 and the thought behind was twenty years of Crystal Ball history with 20 songs. That was the concept of the album. Of course, instead of touring we’ve been kind of waiting two years and doing nothing but songwriting actually. Nobody would have thought of that.

Definitely. Now, the new CD Crysteria opens with a song called “What Part of No”. Tell me a little bit about that song and what that song means to you.
It’s just a really strong guitar riff, really high energy song that probably will be also the live opener. I mean, it’s not 100% decided yet, but it looks like this. It makes sense to open up with a bang. Lyrically, it’s a funny story behind that because during the pandemic, we had several “trolls”— guys that just type bullshit on your social media page and stuff. I said, “I’m not going to argue with you guys” and they kept going and I said “What part of no did you not understand?” Out of that attitude, that song– it’s that attitude actually. A little bit aggressiveness but also positive energy. 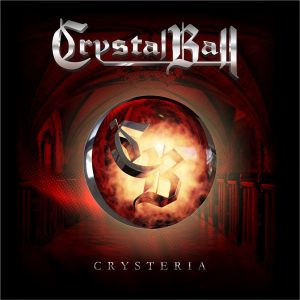 The song Call of the Wild features Ronnie Romero who’s been in a thousand bands, including participating on Michael Schenker’s recent album. How did Ronnie become involved with that song?
It happened that we played a couple of festivals together with Ronnie Romero. He used to sing in a Swiss band called CoreLeoni. So, we met live backstage, we talked, and he’s a really nice guy. I think he digs our sound or music too. When we had the idea for a duet, we got in touch with him and he said yes right away, which made us really happy and proud to have such an amazing singer on our record.

You’ve also had your friend’s Jaded Heart on one of the songs called Crystal Heart. How did that collaboration come about?
It was actually an idea of our singer Steven. The reason was we had this tour coming up in January, February this year and Jaded Heart was supposed to be on tour with us as our support, as our special guest. We thought the bands have known each other for such a long time. Let’s do like a band duet. Not only distinguish singing a song, but really the bands write that song together. So we started exchanging ideas, riffs, parts and bits. So, that song is really written by both bands. The idea was to promote that tour, which is now unfortunately called off due to well-known reasons.

Well, hopefully you guys can play that song together one day. Also, I’d love to see Ronnie Romero do his song with you. Now, you do have a new guitar player Peter Berger. Tell me a little about his background and how he became involved with Crystal Ball.
We had to look for a new guitar player because Tony, our old player, left the band. We wrote down some requirements, you know, what should that guy be like. Of course, he needs to play guitar. He needs to be able to sing. He needs to be a songwriter. It would be cool if he had long hair. He fit outright, come out of the same country and so on. Actually, Peter fulfilled all those ideas we had and it’s really a perfect match for us. He brought in great ideas of his own. He played in several bands like a Swiss man called Killer and in a progressive band called Appearance of Nothing, and even more bands. He is an experienced studio and live player and is a really great new member of the band now.

And of course, you had Stefan Kaufmann producing. What was it like working with Stefan Kaufmann of Accept and U.D.O. infamy?
It’s always a pleasure to work with him, even though he has produced many albums meanwhile with us. He’s like a sixth band member, because we know each other so well. He knows what each musician can do, and we know how he’s working. We don’t have to talk a lot because we can kind of feel each other. It’s so great to work with him, because we can always learn still after the eighth production. We can always learn from him and he pulls out the best performance of each musician at the time. So, it’s always amazing how we can improve the songs by just twisting little things or adding little things or sometimes just leaving things away. Whatever it takes, he always keeps that extra percentage that make the songs even better. 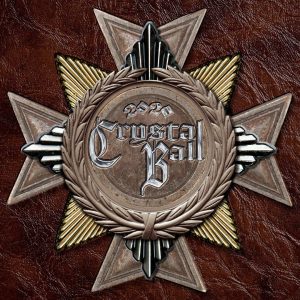 What was it like recording this album and creating this album in the middle of the pandemic? And how did this pandemic influence the new songs, if at all?
It’s a great question. I can’t really put my finger on it, because I don’t know how it would have turned out without the pandemic. It’s hard to tell whether that influenced our mood. Generally, I think the album is more uplifting positive. So, not really depressed or something like that. So, I don’t know if that was an influence or not. But the process was kind of regular like the other albums too. The only thing we did not know, when we booked the studio, we didn’t know if it would be possible to travel to another country to record or would there be restrictions. If that had been the case, we would have done it like modern technique with sending files back and forth through Zoom or Skype. But fortunately, we could just go into the studio like we always did. So, not big of a difference there.

With a band that’s been around like you have since 1999, there’s all kinds of anniversaries you’re going to start having. One such anniversary is the 20-year anniversary of your album Virtual Empire. When you look back on that album and think you recorded it 20 years ago, what do you think of the album now in retrospect?
It’s also a good question. I wasn’t even aware of the fact that it’s 20 years now, but it’s good that you remind me. Well, I think it’s the best we could do at the time and there’s still some good songs on it. That was the reason we chose two songs to be on the best of 2020 album. Looking at it from my point of view now, of course, I would have done a lot of things differently, but I guess that’s normal after 20 years. So, I was still quite young and then that I gained a lot of experiences. And so, I’m not listening to it every day to be honest. But yeah, there’s some moments on that album.

Has Crystal Ball ever played here in the States, or is that something you would like to do in the future?
Unfortunately, we haven’t played in the United States yet. We would love to do that, of course, and it would be great to start maybe with a festival or something. A tour is very unlikely at the moment anyway, but it’s just a big thing financially. So, to start break in at any festival will be great or maybe a cruise or something like that. We just need some promoter to book the band, get the band over and we would be ready and we would love to play of course.

What has kept you so passionate about Crystal Ball since 1999?
I think it’s the music itself and of course, having the right people around you in the band. This would not work if the members would hate each other. It wouldn’t last 20 years. Even though we had some lineup changes, the core lineup was the same for more than 10 years in the first phase or the first decade, and it’s the same for another 10 years now. I think the essence is good chemistry in the band and bring what you like, which is the kind of music that we make. It’s not about money. It’s not about the fame. It’s just about five guys playing music together. I think that is the thing that keeps us going.

“Anyone Can Be a Hero” to me, is like the classic Crystal Ball song. Give me a little background on that song and then we’ll do the final question.
Sure. Yeah, I love that song too. I mean it was the first song of our comeback with the new lineup. It’s almost 10 years ago already. The lyrics were written by Ricky Gee, he is an English man living in Germany. So, he was like an outside prolific writer that we sometimes collaborate with. We dug his lyrics from the first moment and we’re really happy that that song happened. It’s running great on YouTube and so on, and it’s such a classic in our live set always.

Do you have any messages for Crystal Ball fans here in the United States?
I would like to encourage the listeners to give Crysteria a chance and listen to it. And maybe something not everybody might know, we have a limited box set of that album, which you cannot download. It features a poster, flag, signed autograph card, a patch, and of course the CD. So, that’s something for maybe collectors and fans who really like the old school stuff, not digitally. Yeah, you can get that as long as it’s available. 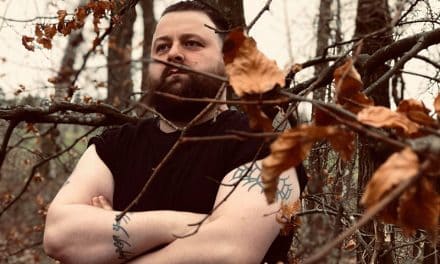 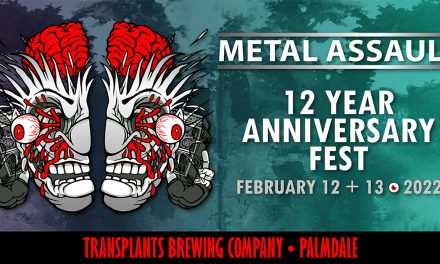 Through The Oculus at Sinners And Saints III – Live Photos