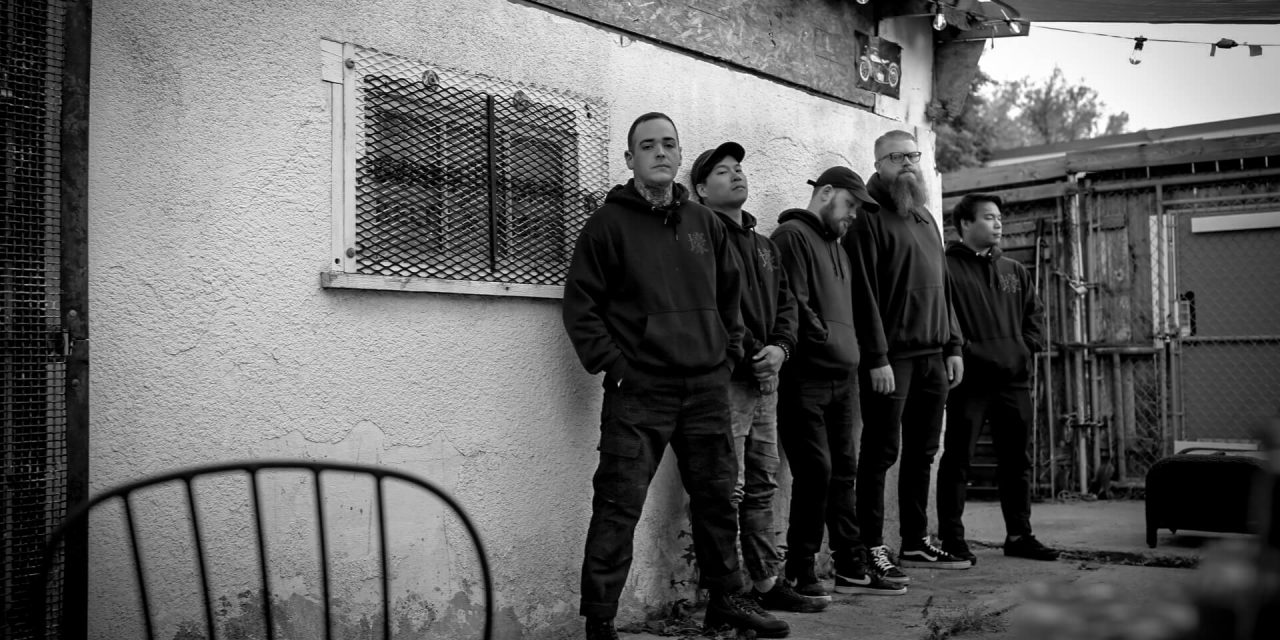 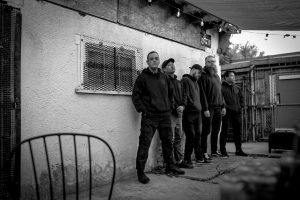 Trench is a dynamic metal/hardcore band based out of Calgary ready to blast an entire planet with their seething sonic entreaties.  Encased In Chrome is the name of their latest EP, now available from New Damage Records – the same label currently repping such iconic acts as Misery Signals and Comeback Kid.  Highwire Daze recently interviewed guitarist Cole Young to find out more about the auditory devastation found within the Trench experience, working with Jesse Zaraska of Misery Signals and rapper Guilty Simpson on various songs, green apple fritter donuts, and other topics of intrigue.  Read on…

Where is the band based out of and what is your local music scene like there?
Trench is from Calgary, Alberta, Canada. We have actually a really great music scene here. We all grew up basically in the Calgary music scene and that’s how we know each other – and that’s kind of what inspired us to form the band. But yeah, it’s a great music scene right now A lot of good bands that seem to be keeping really busy. Wake is a great metal band from Calgary that’s doing some great things. Mortality Rate, Serration – yeah, I would say that we’re very lucky to have the music scene we have here.

Let’s talk about the new EP Encased In Chrome. Is there any overall story or concept behind that title?
That would be a great question for Jay our vocalist. But I know basically what the record is about, is kind of the hardships we’ve faced as humanity in the last couple of years. I know the title Encased In Chrome – it’s the kind of thing that you could interpret it as what you want. But I know it’s the kind of thing of just dealing with the hardships, and dealing with what we’ve dealt with for the last couple of years – I don’t think directed at anything specific, more just in general how humanity has been facing hardships lately. It’s also the first track on the album – so full disclosure – we thought it would be really cool to like – we loved that track name Encased In Chrome – and we actually had that track first before we named the album Encased In Chrome. And I think our eyes and ears kept hearing that title Encased In Chrome – and we were like, “Man, that would be the perfect name for the album. It would lend greatly toward the artwork for the album and all that kind of stuff.” So that’s what we went with for the title. 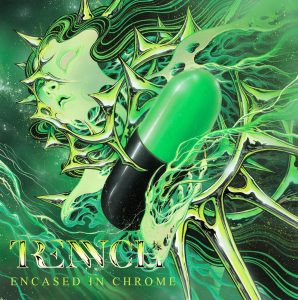 One of the songs on the EP Unforgiven Remains has a rapper Guilty Simpson on it. How did that come about and what inspired you to place a rapper on that track?
So basically, Guilty Simpson and I go back quite a number of years. I’m in a hip hop group called Suicide Kings. The MC is from Detroit – obviously I’m from Calgary – we ended up doing a song with Guilty Simpson who is also from Detroit. So, there’s already a little bit of a connection there. I ended up flying to Detroit probably in 2015 – we shot a video that we did together – and basically, we kind of kept in touch ever since then. And I think when it came to Trench doing a song with Guilty Simpson – we’re all huge hip hop fans in the band and we thought it would be really cool. I make beats – and we thought it would be really cool to have a beat with a rapper that we all really liked and listened to already on one of our songs – and breakdown some genre barriers if you will. We’ve been getting a lot of great response on that song specifically – just because of how abrasive the heavy part of the music is – and then how the part with Guilty comes out of nowhere, but it’s a nice, pleasant surprise. But that’s the back story of that. He’s a great guy and we’re absolutely honored to have him on that song.

How did the political and social unrest and the pandemic affect you overall when writing and recording Encased In Chrome?
I think everything you see on social media – and everything you’re dealing with on a day-to-day basis is going to come out in your creative outlet. Whether that’s writing or doing music or art. And for me musically and for Bryce our other guitar player, Tony our bass player, and Tom our drummer – that was just through the music we wrote. I didn’t think we could make our feeling properly shine through our instrumentation, but I think we actually did. We pent up all our aggression and anger and wrote riffs out of it – and we felt a lot better afterwards. So, I do believe this EP is a byproduct of the situation in the last couple of years for sure. We very consciously wrote it to be an aggressive EP – maybe a little bit more aggressive than our previous works. We definitely wanted it to be a nice short hit you in the face EP – and I do believe the state of the world put us in that mindset. Now on the positive side of things, it allowed us to get together and be fully creative. We didn’t have to prepare for any tours – no one was playing any live shows or anything like that. We got together and we just started writing. It was kind of a beautiful thing. It was a great outlet for all of this. I’m very lucky that I had my band through the pandemic to kind of get that creative outlet going. It was basically just a great support system in general. 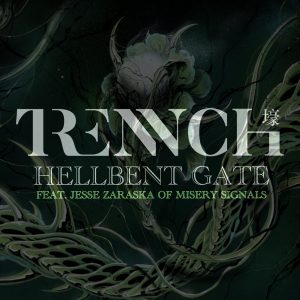 We’re playing with them May 1st in Calgary and we’re all giddy about that too. It’s pretty much playing with people who you grew up listening to. Very surreal having Jesse Zaraska on one of our songs – it’s very surreal still to this day for me. I think he has one of the most powerful voices in heavy music. I pretty much think he’s a genius without getting too crazy over here. By yeah, it was a real treat to have Jesse on a song. It was really cool, because our manager actually put me and him in touch. We were texting back and forth, and he was like, “Man, you should come to the studio. I’ll record this and you guys could come hang.” Me and Jay our singer went up to Edmonton and went to the studio with Jesse – grabbed some lunch and just hung out. It was a great time man. So yeah, the Misery Signals relationship is strong, and we’re absolutely honored to be able to play with those guys. What a trip that is. They’re probably my favorite musicians like currently doing it. I can’t believe how good those guys are at their instruments. It’s just mind blowing. And they are so humble and super nice guys. 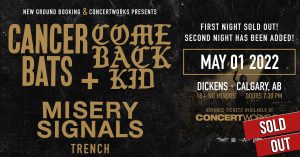 In addition to Misery Signals on that May 1st show, you also have Comeback Kid and Cancer Bats on the bill. It’s stacked! What are you looking forward to the most about playing with all these iconic bands?
Well, I mean, absolutely iconic bands. Comeback Kid – a very iconic Canadian band – they’ve been playing Calgary since I was a little kid basically. Again, to to be able to share the stage with them again is just amazing. Cancer Bats – same thing – kinda Canadian underground legends if you will. And obviously Misery Signals who we just talked about. So, the fact that we were chosen to be able to play that show is pretty mind blowing for us – as you can imagine. One of the coolest things about that show is now that we’re playing, we’re all on the same record label. It’s cool how that worked out where all four of us are all on New Damage Records. So a nice little New Damage Records showcase happening you could say.

If Trench could open for any band either now or from the past, who would it be and why?
The first band that comes to mind is Slipknot. And why I say that is, we all grew up listening to Slipknot, and sonically we love Slipknot. I think they’ve provided a lot of inspiration for Trench. And I think they keep getting better as a band every single time they write new music and go on tour. Everything on down to their image is just so cool how they change it up all the time. If we could ever open for Slipknot, I think that would be a dream come true for all of us. So yeah, cross your fingers, I guess.

If the music of Trench was a donut, what kind would it be and why?
(Laughs) That’s great question! This is a runaround answer, but it would be an apple fritter – specifically a green apple fritter – like a Granny Smith apple. Green is our color, and that’s the closest thing I could think of to translating that into donut form. So, I’ll go with that.

What do you hope the rest of 2022 brings for you and for Trench?
First and foremost, we’ve started writing our LP, so ideally, we’d like to get into the studio late summer / early fall to record our LP for New Damage. Hopefully getting on a couple of tours and just playing some shows. We’re going to do a record release show for Encased In Chrome vinyl we think around August. And that should take us to the end of the year. Unfortunately, there’s things we’ve submitted for that I can’t talk about that may happen or may not. In a nutshell, we’re looking to tour and write and record our record. We’d love to release our LP early spring / summer of next year.

And what do you hope a listener remembers most after hearing Encased In Chrome for the very first time?
It’s 11 minutes of pure fury, so my hope is that you would want to go back and listen to it again and really analyze what’s going on on that record. We built layer upon layer upon layer, and tried to intertwine all of the songs with soundscapes and tried to make it really interesting. So, my hope would be that the listener would go and listen to it again and try and pick out some parts that maybe they missed the first time.

It’s 11 minutes so yeah, just do it!
Yeah, an 11-minute hit you in the face with all we have and leave type thing….

The Starbreakers at The Viper Room – Live Photos