Borknagar on Devastation On The Nation North American Tour at 1720 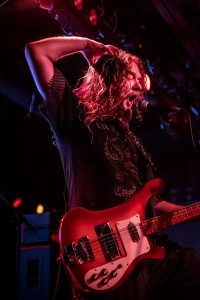 The last time the almighty Borknagar made their way across the States was on the Kings Of Terror Tour in 1999, supporting the legendary Emperor! Now as a new millennium rages on and a great pandemic beings to fade, Borknagar find themselves exploring the vast terrains on North America once again – this time on the Devastation On The Nation Tour with Rotting Christ. Deep in the heart of decaying Downtown LA, Borknagar presented their own thrilling brand of epic black metal, and their vibrant reveries swept throughout the cavernous walls  if the 1720 and into the hearts and minds of local metal fanatics. Opening with the mesmerizing refrains of The Fire That Burns from their recent True North magnum opus on Century Media Records, Borknagar proceeded to enrapture the Devastation On The Nation attendees with eight absolutely brilliant works of sonic artistry.

Founding member Øystein G. Brun and his Borknagar co-conspirators unveil a massive amount of imagination and intrigue into their recorded music and live shows, and this rare appearance here in the States presented the rapturous complexities of extreme metal in its finest hour. Frostrite from 2012’s Urd was absolutely astounding live and The Rhymes of The Mountains from 2016’s Winter Thrice left an indelible impression as well. For old school fans, Borknagar unleashed sonic entreaties such as Colossus from their turn of the century album Quintessence and The Dawn of The End culled from 1997’s The Olden Domain. 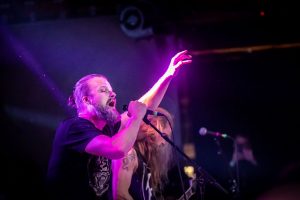 One could watch Borknagar perform for hours and be entranced by the somber yet majestic beauty of their music. 8 songs may have been way too short of a set, but you could tell the metal hordes in Los Angeles were hooked by each and every magical note emitting from the 1720 stage.

In addition to the amazing guitar interludes of mastermind Øystein G. Brun, Borknagar features the dynamic participation of ICS Vortex of Dimmu Borgir infamy on vocals and guitars, Lazare on keyboards and vocals, Jostein Thomassen on guitar, and Bjørn Dugstad Rønnow on drums. On this final date of Devastation On The Nation 2022, Borknagar presented a metal concert for the ages here in the City of Angels!  American fans could only hope it isn’t another 20 years until Borknagar return to cast their auditory spells upon our shores.