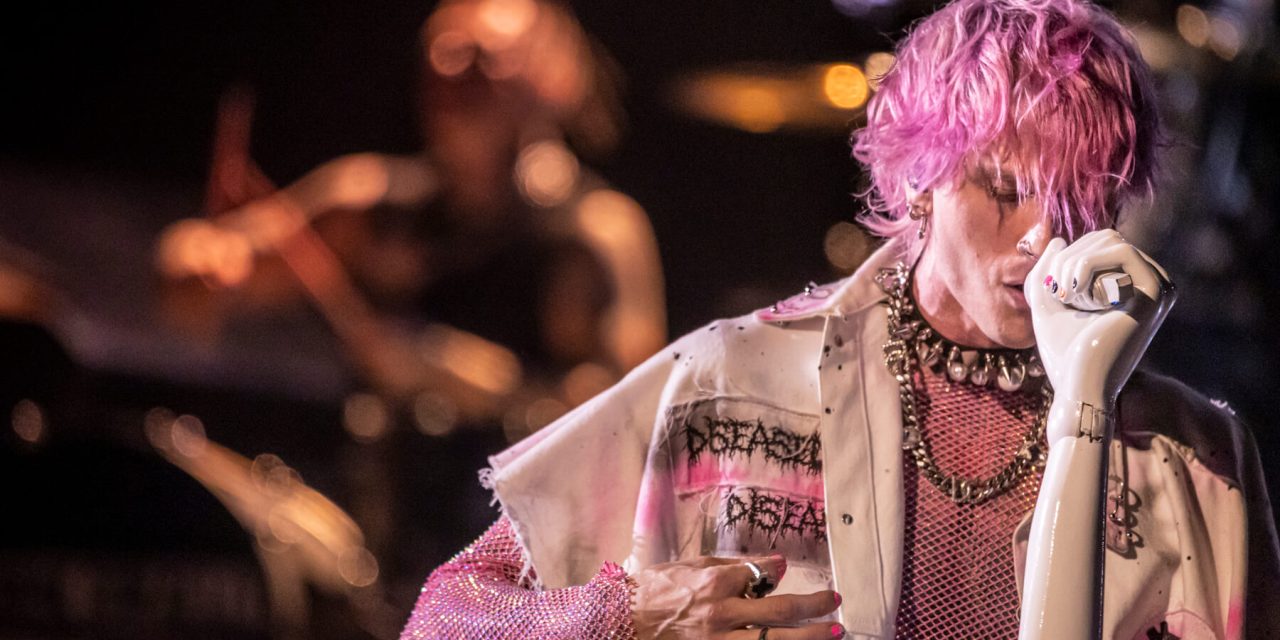 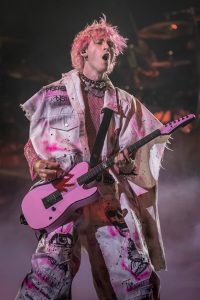 Machine Gun Kelly has come a long way since his humble beginnings. Once having played The Roxy on the Sunset Strip, Machine Gun Kelly is now headlining sold out arena shows – including a one-night stand at the iconic Kia Forum on the Mainstream Sellout Tour! Knowing how to make an epic entrance, Machine Gun Kelly began his show hanging from a helicopter ladder high over the heads of crowd, unleashing a fierce rendition of Born With Horns. Love or hate him, there is no doubt that Machine Gun Kelly is a dynamic performer for this modern age – whether he’s unleashing his own brand of pop punk emo, raging hiphop or straight up rock and roll, there is ton of heart and conviction going into each and every song – and the passion in his work is tenfold within a live setting.

In addition to the brilliant work of Machine Gun Kelly and his band, there were special guests galore for the hometown show. This would include the legendary Lil Wayne, who performed on Drug Dealer and Ay! Opener Avril Lavinge would arrive onstage a bit later to perform Bois Lie with the band. And the surprises kept on arriving on the Forum stage, including appearances by the one and only Halsey, Blackbear, and Willow Smith (who by the way kicked off the night with a mighty bang!)

An amazing standout in the Machine Gun Kelly band is brand new guitarist Sophie Lloyd, whose performance unleashed a massive amount of fire and intrigue into the show. Even visually, the concert was stunning, especially when “The Internet” took an animated life of its own. Machine Gun Kelly clearly speaks to a new lost generation, and his words and music are immense and profound. 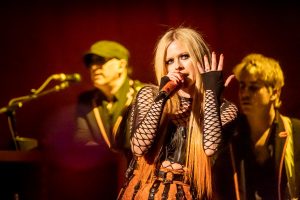 And whoever thought to have the wonderful Avril Lavinge supply direct support is verging on sheer genius! The Queen of Pop Punk took to the stage, opening with the fierce and wonderful Girlfriend – and the entire Forum sang rapturously along to this classic. In town and on tour to promote a brand-new album called Love Sux, Avril and her band performed the single Bite Me and Love It When You Hate Me featuring an appearance by Blackbear. The entire venue went spinning when Avril slammed into her massive hit single Sk8ter Boi.

At the end of the set, Avril performed Complicated, one of her first songs she wrote 20 years ago – and one of the co-writers of the song Lauren Christy was in attendance at the Kia Forum on this very special night. Avril only performed 8 songs, but her fun and memorable set definitely left a lasting impression!

Be sure to catch the Mainstream Sellout Tour if Machine Gun Kelly, Avril Lavinge, and Willow Smith arrive in your town! This is truly one show not to be missed!

Dennis DeYoung at The Rose – Live Review and Photos