The almighty Vigil Of War exploding into this year’s edition of The NAMM Show, rocking out in a vast and epic way at the Cherub Technology / NUX Booth.  The Los Angeles based collective recently issued their debut EP entitled Bite The Bullet – skillfully produced by Kevin Thrasher from Escape The Fate.

Founded by Alicia Vigil and Shane Taylor, Vigil Of War has made quite a name for themselves within the legendary Los Angeles music scene and beyond.  On February 25th, Vigil Of War will headline at the world famous Whisky A Go-Go on the Sunset Strip, the show also featuring Street Lynx, Dead Girl Corp, and 222 in support.

Highwire Daze Online caught up with Vigil Of War right after their Saturday afternoon set within the halls of the Anaheim Convention Center to find out a whole lot more about this amazing band on the rise.  Read on…

Introduce yourself, tell me what you do in Vigil Of War. And what are your weapons of choice and why?
Chris: I’m Chris. I play drums. My weapons of choice – I’ll play anything honestly. I don’t care. Put me on a piece of shit drum kit and I’ll still have fun. As long as the hardware is not garbage and it sounds decent, I’ll play whatever. But I like Promark drumsticks, they actually absorbs your sweat from your hands, so you don’t drop your stick. That’s about the only thing I care about – and good cymbals.

Alicia: I am endorsed with Zemaitis and I love them. They’re my weapon of choice by far. I’ve played on several basses and I really, really love the feel of them and the look of them. I’m very happy with Zemaitis.

Shane: This is Shane. I play a BC Rich Eagle – that’s my main guitar. And my backup is an Ephiphone Les Paul. And those are it for me. Love Ephiphones.

Let’s talk about the new Vigil Of War EP. Is there any overall story or concept behind Bite The Bullet?
Alicia: Bite The Bullet – I wrote it very vague enough where everyone could relate to it. I’m sure that everyone has been  screwed over at some point in their lives, whether it be in relationship, friendship, business, whatever it is. It’s just kind of overcoming that feeling of being screwed over and saying “you know what? I’m gonna do this!” Overcome that feeling and prove people wrong! So that’s kind of what that song is about.

Shane: I thought it was about actually biting bullets!

Alicia: Dangit! His whole perception of this band has been changed forever now! (Laughter)

Yes, for me too! (Laughter) Pick any other song from Bite The Bullet and what inspired the lyrics for you.
Alicia: It’s all about just life. Stitch Me About is about going through some heartbreak. And you are at that point – are you gonna make it work? Are you going to move on? And you’re kind of in that crossroads. It’s more of an emotional one, but I love that song. Livewire is all about being fucking strong – just like Bite The Bullet. It’s hard to be a female in this industry. But that one in particular, could mean anything for anybody listening to it. It’s about being strong and I’m not going to let anyone tell me that I can’t do something.

What was it like working with Kevin Thrasher of Escape The Fate on this EP?
Alicia: He’s amazing! He’s the most patient producer we have ever worked with – ever! I love Thrasher! I am very particular in the studio. I don’t want to say that I’m a pain – but I’m kind of a pain sometimes because I just love everything to be perfect. Thrasher was so cool – he was down to try any idea and re-record things if I wasn’t 100 percent and didn’t feel it was right.

Shane: Every idea he came up with was even more incredible than the last. I can’t say enough good things about him

Alicia: Me and Shane were both nerding out every time Thrasher would shred out a bit. We were just like “Oh my god, that was exactly what we want!” He was so good. It was amazing working with him.

What do you think makes you and Shane work so well together in this band? You both started Vigil Of War together.
Alicia: I’ve known this guy for four years. We’ve been literally jamming ever since. We had another band that never made it out of the garage a few years ago. Me and him and have been writing and jamming together for a long time. He’s such a great band mate and easy to work with. He’s got the whole package. I love Shane. I’m keeping him forever.

And then you have a few new members. London McKuffey on guitar, who is also in a band called Farewell, My Love. London, how did you become involved with Vigil Of War?
London: Just a lot of mutual friends that we’ve all had – similar music styles and the same scene. And eventually after hanging out in a similar setting and environment multiple times, you develop relationships and it translates into a professional work setting very well. So that’s how that transpired.

And then we have another new member – Chris Wilson on drums. How did you become involved with Vigil Of War?
Chris: That’s a good question! I’ve known Alicia for 5-6 years now. She used to come to one of my past project shows – and I met her through other friends. Then I went and saw them recently – and she didn’t think I would play with them…

Alicia: I don’t know if you know who Chris Wilson is. He’s amazing! He’s played with Good Charlotte. He’s played with Matt Toka. Honestly I didn’t think he’d be down to be in our project. But he was like “I miss playing. I would totally do it!” He was at our last show. And I was like “Are you serious? Yeah we want to jam with you!” He’s obviously a really good person and a friend already. He lives down the street from us. We definitely wanted to play with him!

Chris: It’s fun! They’re good people and they are awesome musicians in general – and that’s like one of the number one things. They shred – they all play amazing. I’m kind of a picky asshole when it comes to stuff I’ll play with – but they’re fun, and it made sense to get back into the rock world since I’ve been absent from it for like 7 years. So it’s fun to kind of venture back into it.

If the music of Vigil Of War was a donut, what kind would it be and why?
Chris: Like sweet candy stuff…

Alicia: And one of the photographers today called me Captain Crunch…

Chris: Voodoo Donut as a really good Captain Crunch donut that’s amazing. Maybe we could be that one for now. That’s one of my favorite ones to get. I think they have a vegan version too – but I’ll eat either one – I don’t really care.

Shane: I’m Sugga Shane and I’m really the only one that’s qualified to answer. It would just be a lot of Sugar – that’s my name – It’s not very creative, but I would just throw a whole lot of sugar on it! Just plain white sugar.

Anything to add to this donut, London?
London: No. I’m good. They covered all of it!  (Much laughter)

What’s up next for Vigil Of War? You have a show coming up at The Whisky.
Alicia: Yeah, we’re headlining The Whisky on February 25th. We’re going to be putting out another music video. And we might even just be doing some fun videos to put out there. So keep your eye out… 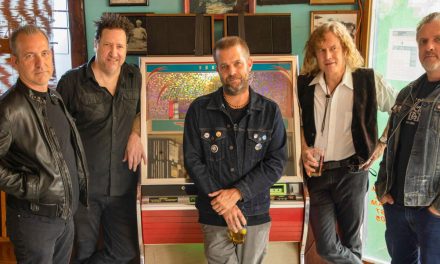 THE STREETWALKIN’ CHEETAHS Return with new album One More Drink 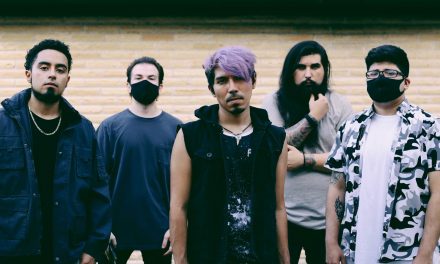