Dark Station and Dianthus at The Tiki Bar – Live Review

Dark Station from the OC played the final date of The Afterlight Tour at The Tiki Bar in Costa Mesa – and their homecoming show was nothing short of a triumph. It may have been late on a Sunday night in a very sleepy neighborhood, but Dark Station brought the evening to life with their inspiring brand of modern rock. Celebrating their recent Down In The Dark magnum opus as well as their upcoming The Afterlight EP, Dark Station presented a vast and varied set of tunes that infinitely set the imagination in flight.

Opening their set with the devastating refrains of Villain, Dark Station instantly enraptured the crowd with their superbly memorable songs and deeply impassioned performances. In addition to a rock-solid electric set, some of the selections would be performed with just vocals and acoustic guitar midway during the set – and the power of the lyrics and melodies clearly left a lingering impression on the hometown audience.

Nathan Spades is a tremendously effective performer, delivering the vocals with a massive amount of drive and conviction. Kyle Ort and David Bruno weave intriguing magic within their dueling guitar assaults. And the rhythm section reigned supreme, presented courtesy of Eric Sinful on bass and Dylan Roy on drums. Fans had been waiting through a pandemic to revel within the exhilarating reprieves of the Dark Station experience, and at The Tiki Bar, the band unveiled their compelling reveries in nothing short of an epic way.

Towards the start of the night, another impressive local band Dianthus took to the stage, and thrilled the early arrivals with their own dynamic brand of progressive rock and metal. Featuring the massive talents of twin sisters Jessica and Jackie Parry, Dianthus transfixed The Tiki Bar with selections seething with imagination and dynamics. The band has shared the stage with acts as varied as Dokken and Crown The Empire and are on the verge or releasing a brand-new album via Deko Entertainment.

Within a live setting, Dianthus absolutely impress, featuring captivating performances from Jackie Perry on guitar and vocals and Jessica Perry on drums.  With a set jammed packed with skill and vibrancy, it will be exciting to see what the future has in store for a band as thoroughly innovative as Dianthus, so stay tuned! Dianthus will be appearing as part of Sirens Of The Scene at Chain Reaction on October 16th with We’re No Gentlemen, Osiria and other female fronted acts. 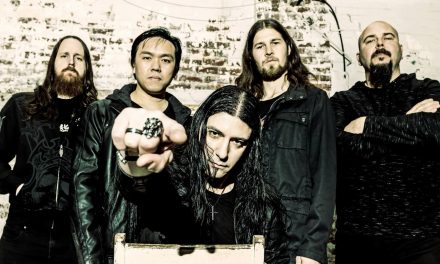 Phil Lanzon of Uriah Heep: Living The Dream at The Rose in Pasadena