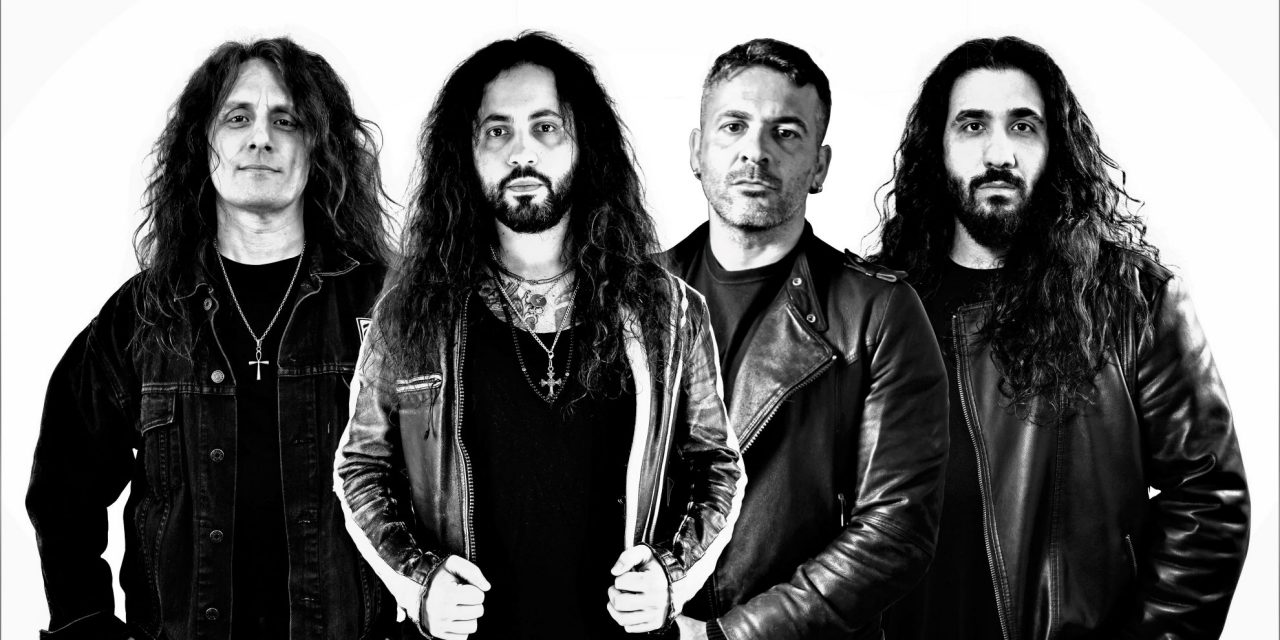 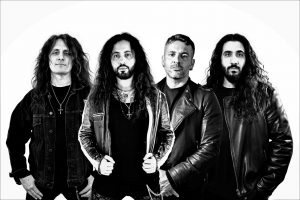 Screaming Shadows present power metal in its finest hour, in the grand tradition of greats such as Iron Maiden, Judas Priest, and Rainbow.  Founded by guitarist Francesco Marras on the dawning of the 21st century, Screaming Shadows recently unleashed Legacy Of Stone upon the world at large.  Legacy Of Stone is their fifth glorious magnum opus, and it’s a work of heavy metal artistry that should inspire genre fans all around the world.  In addition to his own long running band, Francesco Marras recently joined the legendary Tygers Of Pan Tang, and is featured on their just released A New Heartbreak EP.  Highwire Daze recently interviewed Francesco Marras to find out more about the mighty Screaming Shadows and their Legacy Of Stone endeavor, joining the ranks of Tygers Of Pan Tang, his own solo project, and a whole lot more!  Read on…

Introduce yourself, tell me what you do in Screaming Shadows and how long the band has been together.
Screaming Shadows have always been my band that I founded in 1998 and, even though the name was different in the early works, it was just my quest to create a metal band. The name Screaming Shadows was first used in 2001.

Over the years we have released the albums: Behind The Mask in 2003, In The Name of God in 2006 and New Era of Shadows in 2009 both for My Graveyard Productions, Night Keeper in 2011 for Jolly Roger Records.

Where is the band based out of and what is your local music scene like there?
The band is born in Sardinia (Italy), in Sassari, my hometown but actually I’m living in Germany. The bass player is from Germany too, his name is Jürgen Steinmetz and he was the bass player of a famous power metal band named Silent Force. The other musicians are from Sardinia.

In the past two years, the European music scene has come to stop due to the pandemic, so now it’s even more difficult for musicians to play live and promote records. In Sardinia in winter there are very few clubs to play live while in summer, with the tourists and open-air festivals, the situation is a bit better. 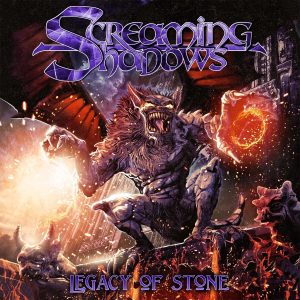 Legacy Of Stone by Screaming Shadows

Is there any overall story or concept behind the Legacy Of Stone title?
We used some symbols to explain the meaning of the rebirth: the gargoyle is a fantastic being who lives a cyclical life, is reborn every night to return to stone at the first light of dawn, we also used fire ouroboros produced by his hands.

Cyclical life is a concept dear to Screaming Shadows because we have never had a continuity, the lineup has always changed, you could say that the band has died and reborn many times.

The word legacy expresses our desire to create a record that could represent what we are today, while maintaining, resuming and developing the concepts and the musical solutions that we have used all these years, an evolution of our music which however remains linked to what we have done previously.

Select two songs from Legacy Of Stone and what inspired the lyrics.
Free me and Shake Your Blood. The themes of my lyrics are inspired above all by reflections on life. I would like to convey a message of positivity, inviting and pushing people to understand the things are really important in life, in search of inner freedom and peace, not to waste even a minute of this life and what it has to offer us. A kind of carpe diem.

Who produced Legacy Of Stone and what was it like working with them?
Legacy Of Stone is the band’s first record entirely produced by me, that’s why it’s very important to me. During the writing, arrangement and production of the songs, one of the main goals was to create inspired songs with the right balance between melody and power, with strong choruses that immediately catch the listener.

I started working on the production of this record about 5/6 years ago, at that time I was still living in Sardinia and I had a small recording studio where I recorded all the material but I did the last mix in Germany, in a studio that I created in the house where I currently live. The mastering is done by my dear friend Mattia Stancioiu.

Who did the amazing cover art for Legacy Of Stone and how much input did you have on it?
The cover was made by a very good French designer, who works for the main metal bands in Europe, his name is Stan W Decker. When I contacted him to make the cover, I only told him that I wanted a gargoyle as main subject and that I would like to represent the cyclical nature of events, the continuous recurrence of some elements and I must say that he created a true masterpiece, the most beautiful cover we’ve ever had.

What could one expect from a live Screaming Shadows show?
Like so many bands that have written the history of heavy metal, we do not aim for stage effects, make-up or theatricality, but simply to play our music with passion and determination. So, I would say: a powerful and impactful show.

If Screaming Shadows could open for any band either now or from the past, who would it be and why?
Obviously for Iron Maiden, because they are the band we all adore and have grown up with. Getting to know them, playing before them during their concert, would be the realization of a dream. 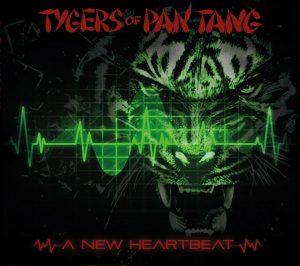 A New Heartbeat by Tygers Of Pan Tang

How did you wind up in Tygers Of Pan Tang?
It happened during the first lockdown, a friend of mine told me that Tygers Of Pan Tang were looking for a new guitar player and that I could be perfect with them! So I sent them the video of 2 songs, Hellbound and Don’t Stop By, both from the Spellbound album. They were interested and Jacopo Meille (singer of the band) called me at the phone and I joined the band. Then we wrote the songs for the new album in just a couple of months, working in distance.  A New Heartbeat, the new EP by Tygers, is available on the official band’s website and it is the first record with me on guitar!

Would Tygers Of Pan Tang and Screaming Shadows ever want to tour or do a show together, or has that already happened?
Unfortunately, it never happened, mainly because, due to the pandemic in progress, I haven’t played live with Tygers Of Pan Tang yet. It would be great for me to be able to play with both bands, but it would also be very physically demanding…

Are you involved with any other bands or projects outside of Tygers Of Pan Tang and Screaming Shadows?
I love to compose music and I’m a session musician so yes, I’m involved in so many projects.

As a solo artist I released the instrumental albums Black Sheep (2011) and Time Flies (2018) and soon I will release my new solo record which this time will not be instrumental and will see me for the first time as a singer, the music genre will be Hard rock inspired by big names like Deep Purple, Whitesnake, Guns N’ Roses, etc.

As a session musician I have played on many records, visit my official page on Facebook to see them all.

Just about every band and musician in Europe has worked with the amazing Alessandro Del Vecchio including Screaming Shadows. What was it like working with Alessandro and do you still keep in touch with him?
I am always in contact with Ale, for example I recorded the guitars for the James Robledo record which he recently produced and was released by Frontiers in 2021. It was recorded during the lockdown. We have known each other for many years and we have worked a lot together, we have played live with Terry Brock, Toby Hitchcock, Angelica, etc. For me he has always been a source of inspiration, as well as a great singer and keyboard player. He is featured in many songs of my production such as Zion (on Time Flies) Here To Stay (Black Sheep) and Midnight (Night Keeper).

Any final words of wisdom?
Thank you very much for the interview. I’d like to salute all the readers and invite them to follow me and my bands on social media. The Screaming Shadows new album Legacy Of Stone is available in CD format on our official website at the following link www.screamingshadows.com, in digital on iTunes, Spotify, YouTube, Amazon mp3.

When you hear screaming… The shadows rule!!! 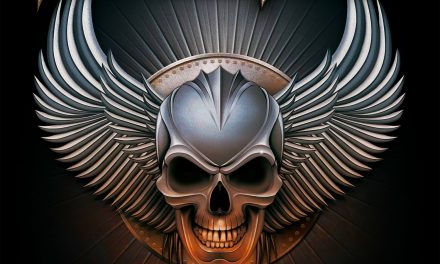 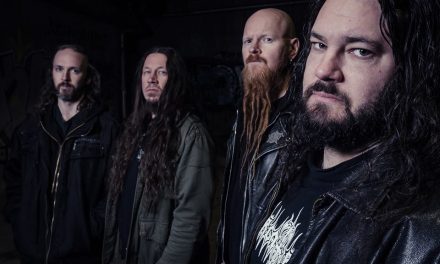