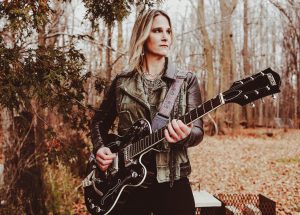 Ottawa, Canada-based, award-winning singer-songwriter Lynne Hanson presents Ice Cream in November, her ninth studio recording!   Released on her very own Panda Cave Records, Lynne Hanson unveils the next chapter to her superbly imaginative Americana adventures.  Highwire Daze recently caught up with Lynne Hanson between tours to find out more about the stories behind Ice Cream In November as well discussing her previous album Just Words which was released right before the dawning of Covid-19.  Read on…

Where are you based out of and what is your local music scene like there?
I’m based in Ottawa, Ontario. There’s a very active and diverse music scene. We’ve got a number of small-and medium-sized live performance spaces, as well as larger theatres like the National Arts Centre and Centrepointe Theatre. We also have a couple major music festivals that take place every summer as well.

Is there any overall story or concept behind the album title Ice Cream In November?
I felt the title track really captured everything I was trying to do with this record. The production is really atmospheric, with elements of pop, and some beats, incorporated into the arrangement. I really had this almost fantastical carnival image in my head when I wrote the lyrics and vocal melody, and we wanted to make sure the production reflected this dreamy quality. I felt like this song really embodied what I was going for in terms of the songwriting and not being pinned into a single musical genre.

Select two songs from Ice Cream In November and tell us what inspired the lyrics.
“Shadowland” – This was a real stream-of-consciousness co-write with Blair Michael Hogan. He sent me an instrumental track that was probably eight minutes long, and so I imported the music into my recording software and cut it up and rearranged it into its current form. Then, I walked around my music room with the music on loop, singing out a melody, and over two days the lyrics emerged. It’s pretty common for me to “see” the images in my head that I describe with my lyrics — kind of like writing the script for the movie playing in my head. Because I didn’t really have a clear idea as to what the story would be, this song ended up being a lot more freestyle rather than a plot that you can follow.

“Hundred Mile Wind” – This song is a co-write with Ottawa-based songwriter Jessica Pearson. The song itself was inspired by a crazy windstorm I found myself in while on tour in the Southern United States. On that particular day in Oklahoma, the winds reached 100 miles an hour, and I was almost blown off my feet at one point. I wanted the song to be as gritty as the air was on that day, and it’s definitely one of the more “Americana”-sounding tracks on the record. 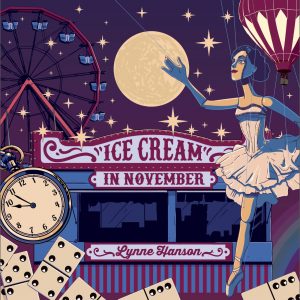 Who did the cover art for Ice Cream In November and how much input did you have on it?
The cover art was designed by Marc Audet. We had several phone calls to discuss concepts, and Marc sent along a rough sketch when he felt like he’d captured the essence of what I was looking for. He’s a really talented artist, and I feel like he’s very good at “reading minds” to be able to translate what’s in my head into something concrete.

Give me a little background on your co-producer Blair Michael Hogan and how he became involved with the album?
I had been following my pal Blair Michael Hogan’s Instagram account as he posted snippets of instrumental songs he had been working on recording at home, and, on a whim in early January 2021, I offered to write some lyrics to one of them. I had just finished a “top line” remote co-write on a progressive rock tune with a songwriter from Sweden, and I had really enjoyed the process. We were in lockdown at the time, so Blair emailed me two tracks, and within the week I had turned them both into songs with a vocal melody and lyrics. I had also just signed a publishing deal with a small independent publisher in Germany, and I had been getting pitch requests, so I asked Blair if he wanted to co-write for one of the requests that had come in. This started us on a path to co-writing a number of other songs, and suddenly we had enough to warrant making an album. In fact, all but three of the songs are co-writes with Blair.

How has your spring tour been going and what has it been like to be back on the road again?
We’ve done dates in the US and UK now, and we’re heading to Europe in May. It’s been a little surreal to be back on the road after being at home for two years. But we’re slowly getting our touring legs back, and it really is like riding a bike. Things aren’t completely “normal” yet, but it’s just nice to be out playing to people again.

Your previous album “Just Words” was released just before the pandemic hit. What was that like to have such an unexpected event happen right when you began to tour in support of the album?
I’ll be honest, it was pretty devastating to have invested so much into the creation and launch of “Just Words” and then have it all disappear basically overnight. I had writer’s block for the remainder of 2020, and I think a big part of that was seeing all those plans evaporate. I still feel that record never really got a fair shake, although we are playing quite a few of the songs now that we’re back out playing live shows.

What was it like to do Internet live shows in the midst of a pandemic?
Like most touring musicians, I had ZERO experience with livestreaming, and it showed early on. I think my first livestream had all the elements — bad sound, sideways. It was definitely humbling. But those Internet shows did provide an opportunity to stay “connected” at some level, especially in the early days when we were all stuck at home. 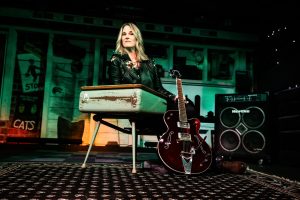 What was the experience like playing European Festivals such as Glasgow Americana and the Maverick Festival?
It’s always an honor to be in a festival lineup, and the further from home the more special it feels. One of the things I like the most about playing festivals is getting to meet and hear all the other artists. It can be incredibly inspiring, and a lot of the time friendships and connections are made that last well beyond the festival.

When you look back on your very first album, “Things I Miss,” from 2006, what do you think of it now in retrospect?
Every songwriter has to have a debut album. I’m probably not alone at cringing at some of the songs on that record, but it’s a necessary process to be able to end up where I am today as a songwriter. I’m always trying to improve and grow, so it’s both humbling and entertaining for me to listen back to those early efforts.

What do you hope the rest of 2022 brings for you?
Hopefully things continue to improve on the live performance front, and we can all get back to doing the things we all love to do. Fingers AND toes crossed that I get more “album release” touring in for this album than back in 2020, LOL.

Any final words of wisdom?
I don’t know if I have any words of wisdom, but I will say that I am grateful to be still making music full time, and I am really trying to focus on all the positive things that came out of The Pause. I certainly made some significant changes during the past two years, and I’m trying hard to hold on to some of the good habits I picked up. Probably the most important lesson is to appreciate what’s happening right NOW, as there’s no telling what tomorrow might bring.