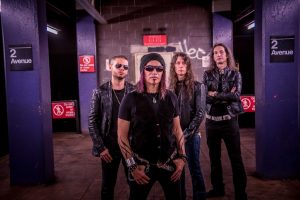 Jommy is an Italian internationally renowned lead guitarist and musician. Born Gianmaria Puledda, he has studied guitar for more than twenty years and has developed a recognizable sound and a style that excels in heavy metal, but which is well suited for various styles of rock and pop music, with classical influences, blues, funk, fusion, electronic and ethnic music with the use of the Greek bouzouki. This has led Jommy to the creation of a particular style defined by some as “Mediterranean Metal”. He received praise as a guitarist of “superior technique, tone, groove and image” at his audition for the band Spread Eagle. The judges included Rob De Luca, who has recorded for Grammy-winning “Producer of the Year” Steve Lillywhite, and for Grammy-winning “Album of the Year” engineer, Tom Camuso. Another judge of the audition was Ziv Shalev, who is an ASCAP and Academy Award-winning musician.

Jommy, as a winner of the audition, will be joining Spread Eagle as guitarist, playing favorites such as “Switchblade Serenade” and “Scratch Like a Cat” for its upcoming tour. 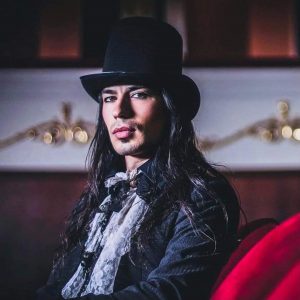 Jommy recorded guitars for the single “Sentence of the Blade” at Massive Arts Studios in Milan, and was the lead guitarist of the albums The Sorceress Reveals – Atlantis, recorded at Fascination Street Studios in Sweden by Jens Bogren, and he recorded all the guitars on the album Janas which was globally acclaimed and reached top ‘rock album’ charts, soaring to the #3 Metal album position in Italy, and also achieving high rankings in ‘rock album’ charts in South Africa, Oman, Greece, Estonia and the Netherlands.

Throughout his career, Jommy has been invited to play with some of the most accomplished artists in Europe. He played as lead guitarist for Roberto Gabrielli, a producer, composer and owner of GReurosound label for eurobeat music. Gabrielli is well known in the eurobeat music industry, and actually one of the leaders of the entire movement, formerly working for Discomagic, Time Records, Hi-NRG Attack, Boom Boom Beat, Delta and Akyr Music. As a highly in-demand lead guitarist, Jommy has collaborated with some very well known names in heavy metal music. Among them, Francesco Marras, guitarist of Tygers Of Pan Tang, Screaming Shadows and others. Marras chose Jommy to play guitar in his band, Screaming Shadows, for their 2021 European Tour. Jommy has also worked with Oscar Nilsson, a renowned drummer, music producer, mix and mastering engineer at Crehate Studios in Gothenburg, with whom he worked on the Janas album.

Katastro at The Roxy – Live Review