Under The Western Sky with Thunder 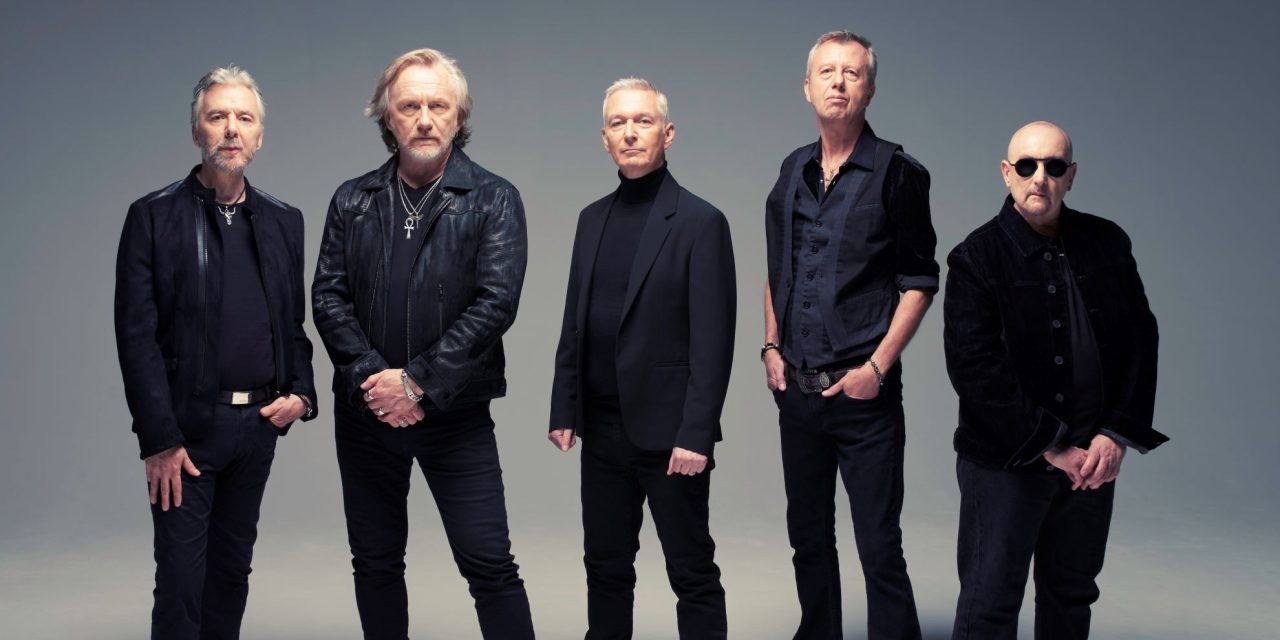 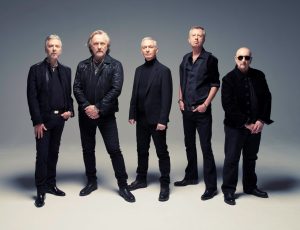 Under The Western Sky with Thunder

Icons of British hard rock, Thunder has presented their brand-new recording entitled Dopamine via BMG.  Their first ever double album, Dopamine is jam packed with songs inspired by the world’s mass retreat to social media during the pandemic lockdowns.  Selections such as The Western Sky and Dancing In The Sunshine are destined to be fan favorites while the entire Dopamine album will surely wind up on quite a few Top Ten lists as 2022 spins to its conclusion.  Highwire Daze recently interviewed Thunder’s guitarist Luke Morley to find out more about the epic Dopamine experience, a look back at album anniversaries from 20 and 30 years ago, the O.J. Simpson connection during the last time they played here in the States, and more…

We’re here with Luke Morley from Thunder. Let’s go ahead and talk about the new album. Is there any overall story or concept behind the album title Dopamine?
Well, there wasn’t intentionally, but what happened was a lot of the songs were written and conceived during the pandemic and lockdown. And then those subjects are from that – loneliness – isolation – wanting it to be over. Those kinds of things are featured on the album. And there’s also another theme concurrently running through which is a bit more about social media and the human effect of that. So those two themes come together throughout the album.

At what point did you discover that Dopamine was going to be a two-disc set?
(Laughs) Not until I think we were 75 percent through the recording we realized we had almost too many songs. That’s not unusual for a Thunder album – we normally whittle it down to 11 or 12 or whatever. On this occasion, we recorded 20. And when it came to kind of crunch, we thought you know what, there’s 16 songs here we all felt needed to be heard – and I guess that necessitated it to being a double album – and that was fine. Our record company was a bit concerned when we told them, but they got the idea once they heard the music. 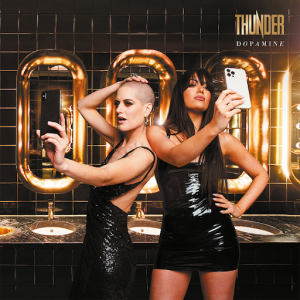 Let’s talk about a few of the tracks on the album. The opening track and I believe the first single The Western Sky – tell me a little about the inspiration behind it.
About 12 years ago, we got involved with a British Children’s charity called Childline, and we were approached to take part in a motorcycle ride through parts of the US and Canada that were a little off the beaten track. I personally don’t ride but two of the guys in the band do, so I said we’ll all come along, and I’ll rent a pickup truck. So, we got together 30 people from various walks of life – military people, financial people, people from the music industry, other musicians. And we got people and sponsors to ride through these places, and it was fantastic. It started 12 years ago, and we’ve done it every year up until the last two years because of the pandemic. We’ve done all the Rocky Mountain states and this year we’re doing it again. This year we’re doing New Mexico, Texas, and Arizona. So, it’s a fantastic thing to do, and we’ve raised over a quarter of a million pounds for charity so far. But basically, the song is about the camaraderie that occurs on that trip, the many miles, and chilling out at the end of the day- having a few beers, the guitars come out and maybe sing a song or barbecue. So that trip inspired that song.

And let’s go on to the next single Dancing In The Sunshine. Tell me a little about that one.
This was where we were trying to find the positive in the pandemic, if you like. A nice sunny day and we were locked down. And I though wouldn’t it be great if we could call a few mates, get a few mates around, crack open some cold beers and turn up the music. And the song is simple as that – and it’s interesting because I had the music before I had the lyric – and musically I was kind of humming along with myself. I thought it has that mid-70’s – maybe Doobie Brothers – maybe even Steve Miller feeling about it – so it’s gotta be kind of happy.

What are you looking forward to the most about your upcoming arena? I think you’ve got Ugly Kid Joe on the tour!
Yeah, it’s an interesting tour. Ugly Kid Joe on all shows as special guests, and then we have a different opening acts every night – and they’re all British bands based in the locality that we’re playing in. So, it’s a nice kind of thing to do – gives those bands a shot of playing in front of a big audience. And it’s great to have Ugly Kid Joe out because they have a few massive hits in this country and that’s a nice kind of addition to the bill. I met Whit a few times over the years – I haven’t seen him for a few years – he’s a character. It’s going to be interesting.

The thing I’m really looking forward to is just actually being in front of an audience to be honest with you. Those shows have been postponed twice already. I’m still kind of expecting somebody to call me and “Okay they’re off again. Something’s happened.” But we’re just a couple of weeks away, so everything will be fine. It’s just that moment when the Intro tape plays and the house lights go down and you hear the audience – that’s the moment that you get the shivers up the spine and the goosebumps, and the adrenaline kicks in. That’s what it’s all about – and it’s been very strange not being able to do that for the last two years. 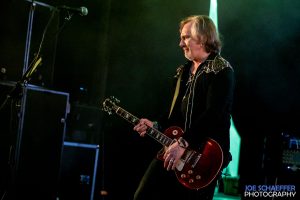 When was the last time Thunder played out here in the Los Angeles area or here in the States?
That’s a very, very good question. (Laughs) I think I’m correct in saying not since 1994. In 1994 we had one show. What happened – we were recorded at Record Plant and Rumba Studios in the Valley, and Kings X were in town – they were doing a show at The Palladium – and we had sort of asked Kings X if they wanted to open up for us in the UK a few years before, and they couldn’t do it unfortunately. But when they came, they did a one-off show in L.A., and they knew we were in town. And they very kindly said “You can come and open for us.” And we said, “Yeah, why not?” So, we did. It was an eventful night, because it was the same night as the O.J. Simpson up the 405 in the Ford Bronco. It was the same evening. It was kind of crazy. So, we played and then we spent the rest of the night in the bar sort of watching this thing unfold on TV. It was a very strange evening. But yeah, that was the last time. Since then, instead of playing in the States, we’ve done the Monsters Of Rock Cruise a couple of times – but that’s the closest we’ve come. It’s a strange thing, because it’s a great source of frustration for us. We would love to come tour there and play.

In 1991, Dirty Love was all over MTV and it was all over the radio. I think we sold over a quarter million albums, and we were all set to come over and open for David Lee Roth and Cinderella – and then the tour was cancelled because ticket sales were poor. We asked our American management why ticket sales were poor, and they were like “because of grunge.” And I was like, “What’s grunge?” I mean, we literally hadn’t heard of it in the UK at that point. So yeah, that kind of killed us really at that time. Our label was Geffen Records – and all of their priorities changed – and they decided they wanted to push forward in that direction. So traditional rock and roll band like ourselves – Aerosmith left the label, Whitesnake was on the label at the time. Everybody was struggling with it over there, including us because we had just built up a fan base over there. So, we never got to come out and tour. And since then, we’ve had a few offers to come out and do things, but the timing has never been right. So, I’m hoping that maybe next year we’ll get the chance to come out and play. 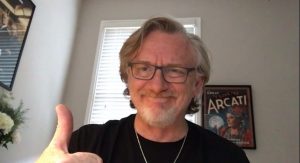 Here’s the anniversary part of the interview. We’re going to back 30 years in time to the album Laughing On Judgement Day. What do you think of that album in retrospect and that period in your career?
It’s interesting actually, being here we are talking about Dopamine being a double album. I think Laughing On Judgement Day is probably a bit long. If I’m being hypercritical of it, I think there were maybe a couple of songs on there that it could have done without. Having said that, the good bits are really good- I still think Low Life In High Places and A Better Man are really good tunes. There’s kind of a spirit about the album and a great sort of confidence about it because with the first album, we had been very successful here and a few other places. So, heading into the second album, we were full of it (laughs) – and there was a spirit in the album which was nice.

Now we’re going to go back 20 years to Shooting At The Sun. When you look back at that time in your career, what do you think of it now?
Well, that’s interesting, because we had stopped for a while in 1998 and then we came back in 2002 to do some shows – just for the hell of it really. So, we thought maybe we should record something and have an EP to sell. So, I started writing again and it became the album Shooting At The Sun. That’s an interesting album. You can hear kind of a transition maybe on the album from the beginning of the band. It’s kind of like the beginning of our next ten years when we were started branching out a bit. But Shooting At The Sun – I love the opening track Loser very much – I think it’s an exciting bit of rock and roll and one that we still play live now quite a bit. Somebody Get Me A Spin Doctor I think is on the album – that’s a good track – so yeah, there’s some good bits to it. I see it as a transitionary album really.

Do you have any messages for Thunder fans here in the States who have been waiting a while for you guys to come over and play?
Well, yes. Hello to both of you (Much laughter) Listen, I know we have buckets of support coming from all over the States, so it’s really frustrating we haven’t been able to come over and play. All of us would dearly love to do that – to come out and play. I think how we do that – whether we come over on our own and play a few major markets – or whether we do a tour with somebody else – we’d be perfectly happy to do it if it was the right bill. I just hope that we do get the chance to do that. So, keep the faith and we will try and come over – any possibility, we will be there… 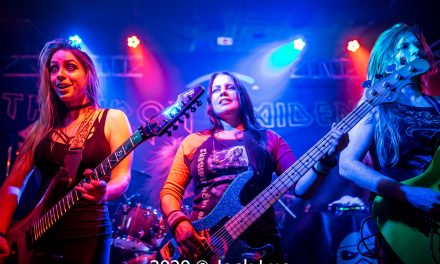 IRON MAIDEN “THE BOOK OF SOULS” TOUR RETURNS TO NORTH AMERICA IN 2017!