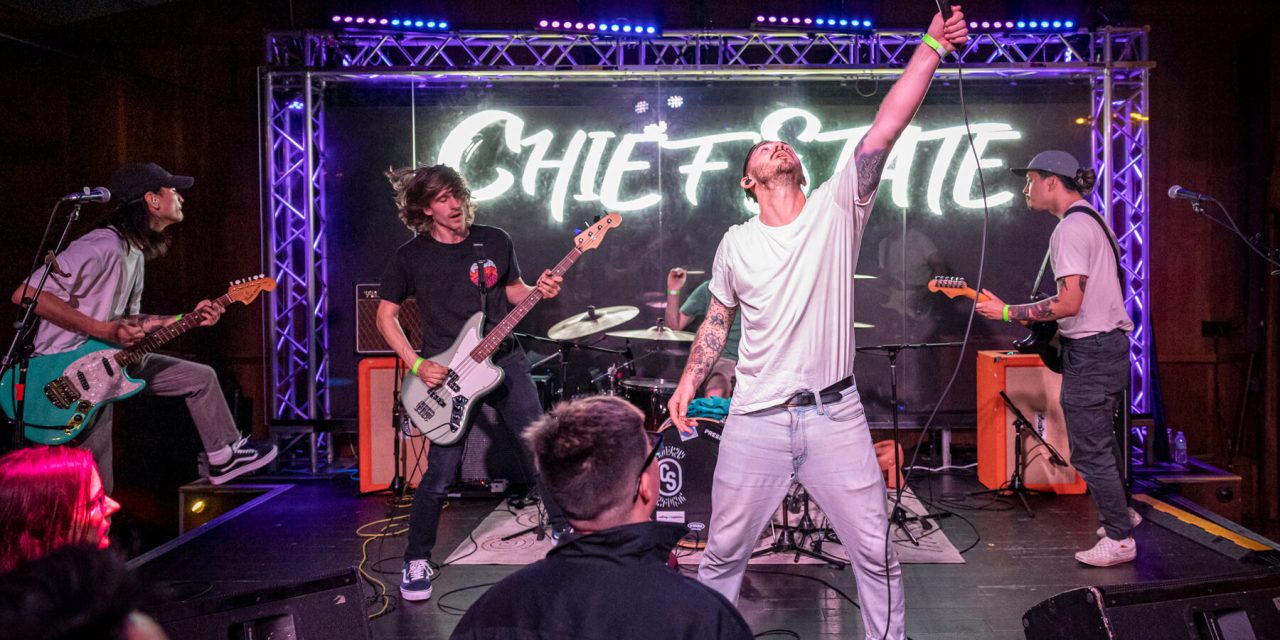 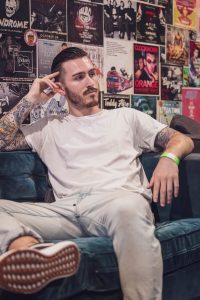 Chief State made their way to Southern California on a c0-headlining tour with Calling All Captains, playing shows at Chain Reaction in Anaheim and Los Globos in Los Angeles.  In town to promote their upcoming Waiting For Your Colors album on Mutant League Records, Chief State played an explosive set of pop punk anthems at Los Globos deep in the heart of the City Of Angels.  Prior to their intensive set, Fraser Simpson, front man for Chief State, sat down with Highwire Daze backstage to discuss their current tour, the arrival of Waiting For Your Colors, and the story behind the band meeting from an ad on the infamous Craigslist!  Read on…

We’re here with Fraser Simpson of Chief State at Los Globos in Los Angeles. So how has this current tour with Calling All Captains been going and what are some of the highlights?
It’s been fantastic so far. Obviously it’s been a long time without tours and without playing shows, so it’s been nice to be doing it again and actually seeing quite a few people – a lot more than our last tour – so it’s great to see. Highlights – I would probably say last night we checked off a bucket list playing Chain Reaction. That was on the bucket list from day one – we wanted tour the US and we wanted to play Chain Reaction and a couple of other cool venues like that. So that was awesome to do that. Sacramento was really fun as well – we played a country bar up there. It was a country bar, but it was set up really well – lots of people there and it was a good time. So those two would probably be my highlights so far.

The last time you were out here, I believe you played in Pomona. How did that show go?
That was actually our first ever California show – and we were just joining up with Belmont and Such Gold on a tour. It was the first time we had played the US. We kind of did a couple of shows – we played Portland and Seattle on the way down to meet up with those guys. It was just us – we were brand new at that point – so this was the first show were we actually had a decent amount of people at a really cool venue – I think it’s called The Glass House. Great sized venue and Belmont are obviously a fantastic band – they had a lot of hype at the time, and it was a good show. I have fond memories of it.

Another recent show you played up in Canada with these legendary bands – Cancer Bats, Comeback Kid, Misery Signals – what was it like playing with these bands who are also slightly different than your band?
It was a privilege. We actually got lucky – Cancer Bats, we played with them our second ever show in Edmonton way back in 2017/2018 – something like that. But yeah, Comeback Kid is one of my all-time favorite bands. It was very surreal to be hanging out with those guys and playing on such an awesome bill. We were just grateful – we knew the promoter doing that one, reached out and said hello – and thankfully, they asked us to play and open. It was an awesome show! 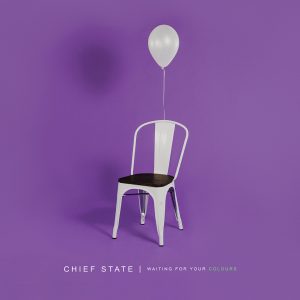 Waiting For Your Colors by Chief State (Mutant League Records)

You have a new album about to come out called Waiting For Your Colors. Is there any overall story or concept behind that album title?
I would say the title of the album is hard to find, because a lot of the content has to do with reaching the end of your 20’s and kind of reassessing where you are with everything. I think a lot of people go through that – and me, when I was writing this, was going through it – just trying to figure out where my place was in life, what I wanted to do and that sort of thing. Waiting For Your Colors was a lyric in one of the songs – and it just seemed to fit that vibe – trying to figure out who you are as a person and what you want to do – and waiting for your colors to shine through. So, it kind of tied it up pretty nice. We had already kind of settled on the artwork as well or the concept – with it all being purple – and Waiting For Your Colors was a fitting name.

Let’s talk about the current single from the album called Out For Me.
That one – it comes down to pretty much what all of the songs on the album are about. That song is about beating yourself down the whole time, knowing that you’re in a rotten (way) – making the wrong choices, but you keep on doing it again and hoping for something to change without actually making any changes. That’s kind of what I’ve gone through the last couple of years, particularly through the pandemic and that sort of thing. It’s a reflection of that.

How much influence was the darkness and isolation of the pandemic when it came to writing the album?
Yeah, with that it made me reassess my life and what I was doing with my time. I think everybody did. So many of my friends have shifted careers and that sort of thing. It did influence that – there’s actually one or two songs – you can hear it – it’s all about isolation and being trapped in the restrictions we were in for those first few weeks and months. Of course, it naturally had an effect – every band and artist who wrote anything during those years – it’s going to have an effect for sure.

Were you out on the road when the pandemic began or were you lucky enough to be home?
We were at home. We were lucky that we weren’t out on the road, but very unlucky with the timing. We released our follow up EP one week after the pandemic was officially in place. Tough Love came out 29th of March in 2020 – so the timing was horrendous. We went two years without playing any of those songs to anyone. Even now since we’ve got the (new) album out, so many of those songs we don’t play. It’s an unfortunate thing, because we really loved that piece of work we did – and we really didn’t get to push it and show it to the world. It’s a shame we had to cancel the tour we had planned for that. We do play a few songs off there, so it’s nice. 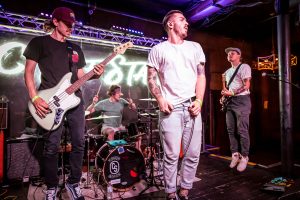 So, Craigslist – how was that site involved with you meeting up with the rest of the band?
(Laughs) Yeah. So, when I left England which would have been 2013 – I wanted to travel around and stuff – I did the whole ESO teaching English in a few countries – went to Thailand, Indonesia, and Malaysia – and ended up living in Japan for a year. So, I spend two years in Asia teaching and travelling – and when it was coming to an end, I had that travel bug – where I didn’t want to go back to England – but I wanted to start to do my passion and dream – which was to start a band again. I did a lot of music growing up and just didn’t have a band for a few years. So, I wanted to do that, but I didn’t want to go back to England. So, I knew for me to make it work, it would have to be an English-speaking country and was in between Australia, United States, Canada – and specifically Vancouver and Melbourne. In the end, I settled on Vancouver for a couple of reasons.

While I was still in Japan, I put out a Craigslist ad in Japan – in Vancouver – looking for musicians to start a pop punk band. Got a lineup together, so by the time I landed in the country, meet all these guys – and we all just got in a room – and it didn’t go very well. But at least two of the guys it went pretty well with – and one of the guys was Nik Pang – me and Nik are the original two of this band. We kind of spent a year writing – just the two of us – and then kind of mid to late 2016, we decided to pull some members in. We had a couple of changes, but we pretty much got going in 2017 – another member change in 2018 – and we’ve been the five of us ever since. So yeah, that’s kind of how it all came together.

You always hear these crazy stories about people meeting on Craigslist…
(Laughs) Yeah, I always say it was it was like the lonely-hearts column for me and Nik… (much laughter). Just two people with the same passion for music – so it’s good that we met each other and were able to create something like this.

What’s up next for Chief State after this tour is all over?
We’re going to keep on pushing the album – obviously, that comes out in a couple of weeks, and we’re really excited for that. The whole tour – we’re really pushing it as much as possible – and trying to play as many of these new songs as possible so people can hear them. As soon as we get home, we’ll be looking to push that more online – and then go back out and tour again. Obviously, the US is a very big market and we’re not covering the whole country at the moment. So, we would like to get back out. There’s a couple of opportunities we’re interested in pursuing as well – Europe and Japan – so hopefully those do materialize. With a lot of the Covid restrictions in place in certain countries – still a little hard, but we’ll see how it goes. But for the time being, it’s all about Waiting For Your Colors and pushing that.

Waiting For Your Colors by Chief State is now available via Mutant League Records! 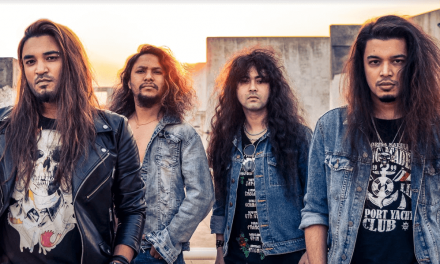