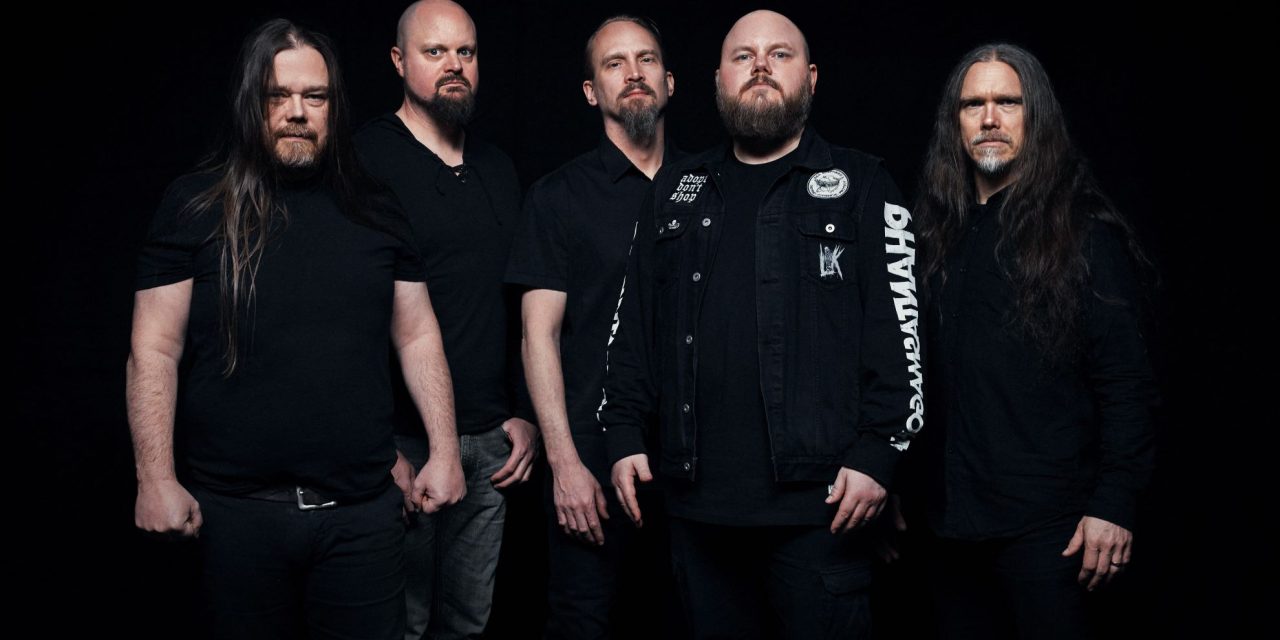 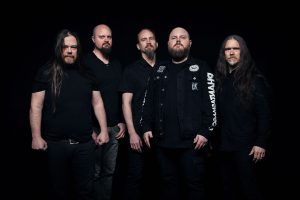 The almighty Darkane recently issued Inhuman Spirits, their first album in nine years, via Massacre Records!  Their inspired brand of super intensive melodic death metal remains as vibrant as ever, signifying a grand and glorious reawakening for the much-revered Swedish collective.  In this interview with Highwire Daze, drummer Peter Wildoer discusses the making of Inhuman Spirits, why the process took nine long years to complete, their first US performance at the infamous Milwaukee Metalfest in 2001, working with Galder of Old Man’s Child, and a whole lot more!  Read on…

Why did it take 9 years to record a new Darkane album? Did maybe a pandemic and real life get in the way?
I guess it’s a bit of both actually. There’s definitely a lot of real life happening in between here. I have to say the reason is mainly because of me. After we released The Sinister Supremacy in 2013, I had to go back to university to study. I’ve been working as a teacher in mathematics and drums for like 22 years now. The thing is that I had to have this license to teach. The changed the rules for that in Sweden, so I had to go back to the university. I worked full time and I had to study at the university almost full time too for 3 ½ years. So that was of course a bit demanding to say the least – to go back to university and study math and stuff like that. So that took a few years. After that, I really didn’t know – that was in 2017 – then some things happened in my family and then in the other families – and I didn’t really know if I wanted to pursue to play drums – and especially metal drums. Getting older and trying to play fast – it’s not a good combination. In a way, it was mostly because of me – but then during the pandemic – we already had all these songs. Christofer had been writing all this time and Klas wrote a few songs. And we said we have these great songs, and they asked me, “Are you still up for continuing with Darkane?” and I say “Yeah! Okay, let’s do it!” Because I really didn’t know for a couple of years there. In the end we decided we have too much fun – we’ve known each other for more than 30 years, so it’s natural now to do a new album. It felt natural.

Is there any overall story or concept behind the album title Inhuman Spirits?
It’s not a concept album, but I think Inhuman Spirits – the title track – it’s both like a fiction – the horror inhuman spirit – like in the movie Conjuring and stuff like that. And also, Inhuman Spirits that are taking over the world and all that. But that can also be – it’s also what’s happening all around us at the same time in the real world of course. There are powers around the world that maybe doesn’t see for the good of people. We now have in Europe – there’s a war going on in Ukraine and stuff like that. So, it’s a fictional theme but you can also apply it in reality.

How did the pandemic and maybe all of the social unrest and chaos in the world today affect the writing and recording process?
We did a lot of the recordings each on our own at home – that’s easier today. And we have our own studio with Darkane too – we have a huge studio, and we did the last two albums there. But in a way, the inspiration wasn’t flowing with the pandemic. Even though we have the time to do something, it also has to feel right. And that really didn’t match up with the inspirational part – and the motivational part because of the pandemic. Maybe it didn’t line up as well because we had a lot of time on our hands. It also influenced the lyrics maybe a little bit. Most of the lyrics are fictional, but more on the human psyche. It’s horrible I think with serial killers and stuff like that, but people are fascinated by that. How deranged is a human mind? And that has been the theme for Darkane over the years. So, I think we have that side – towards the dark side of the human psyche – and also more fictional kind of lyrics. More horror, inspired by movies like Hellraiser and stuff like that. I would say that has been inspiring us from the very beginning – and still does. 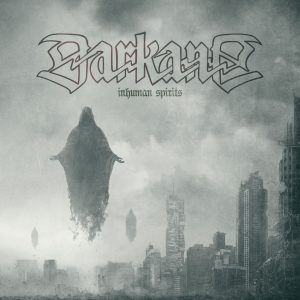 You’ve made the move over to Massacre Records. How has that been?
We did the last two albums over at Massacre Records, and that worked really well. But I have to say this time around with Anja taking care of the promotional stuff – we have a much better contact with the label.  I don’t know the reason for that, but it feels really great to be working with them. They’re like a smaller label of course, but sometimes it’s hard to be like classical small fish in a big pond. I think it’s a good fit – I have to say that – and I’m really happy for the work they’ve been doing for us this time.

Are there any touring plans for Darkane – either in Europe or here in the States?
Yeah, we had plans. One thing since the pandemic – all festivals are fully booked since two years back. They were booked for 2020 – didn’t happen – the same thing in 2021. And now when it’s happening, it’s really hard to get a spot on a festival now. The festivals for this summer – there may be a couple happening – we’re on the waiting list if some band cancels. We are already looking into 2023 for touring actually.  Now we all have families, but the kids are older now because it’s been so long between the albums here. With older kids, it would make it easier this time around to tour. Of course, we are used to having daytime work with the salaries – that comes with that – but I think everybody is super excited to actually go on tour again – and hopefully go to the US again. It’s been 14 years or something like that since last time. So, it’s about time to go on tour!

The first time I actually saw Darkane was at the Milwaukee Metalfest in 2001. What was that experience like playing the Milwaukee Metalfest at that time?
In the beginning we released our first album Rusted Angel in 1999 and a lot of people really enjoyed that album. So that was kind of a really cool debut album for Darkane to do. And so, we did a lot of cool stuff – and when we got to Milwaukee Metalfest, to go to the US for the very first time, it was, of course, a huge experience! It was an awesome experience! And travelling across the world and then there were people who knew about you and who know the songs and could sing to the songs. That was one of the coolest experiences being a musician and being in a band – to go to the United States or Japan and having people know your music. It’s an amazing feeling! Milwaukee Metalfest was very cool actually – a great lineup and a cool vibe for the festival.

You played on Old Man’s Child final album to date Slaves of the World in 2009. What was that experience like working with Galder?
I knew some people at Century Media, and they contacted me because they knew Galder, and he was looking for a drummer. And he had different drummers on his albums – amazing drummers on the different albums like Gene Hoglan and Nick Barker. But that was actually a very cool experience. I haven’t played that much black metal so to speak – and maybe it’s not as symphonic as Dimmu Borgir, but it’s on the more thrashy death metal side of black metal in a way. So, it kind of fit my drumming. But we had a great time hanging out and working – I was working on the songs and sending him pre-productions when I was working on it in my own studio. That was actually such a cool recording, and he was such a cool guy to work with.

I want to go back exactly 20 years ago to Expanding Senses. When looking back 20 years, what do you think of the time for Darkane and that album in retrospect?
I have to say, we’ve re-released all the albums now, because they haven’t been available on digital or Spotify for quite a few years actually. Over the last few weeks, we have been re-releasing the albums. They have been remastered by Lawrence our vocalist who works as a remixing and mastering engineer. And we all had to listen to the albums to check and make sure that everything sounds well and that they were no mistakes or clicks or sparks or anything like that. And I have to say, I have a very good feeling when I listen to Expanding Senses. The production is super loud bass and super heavy – and I actually like that. I like the whole sound of the album. Maybe it’s not crystal clear what the guitars are playing, but the sound as a whole is super cool. And I think there’s some pretty strong songs – Innocence Gone of course – we did a video for that one – and Chaos Vs. Order I think are the obvious ones. But I think it’s really a great album. Sometimes when you record music, you have some kind of feeling when you record it – and maybe that feeling stays with you. But I have to say the feeling I got with Expanding Senses is still very good. I still enjoy the album. I think it sounds very cool also. I’m very happy with it.

And here’s the million-dollar question. Will it be another 9 or 10 years before we have another Darkane album?
(Laughs) I honestly don’t hope so. I think I would be – let’s say old – older at least – at that point – everybody would be. I think for the next album, we would really have to speed up the process. And at the moment it feels great! Actually, the vibe in the band – it’s always been good! We’re great friends! We’ve known each other for many, many years since we were young. So, we’re like the best of friends too. I think we would have to speed up the process to make an album happen before we get too old. It’s not that easy to play this kind of music when you’re getting old. It’s kind of demanding actually.

Do you have any messages for Darkane fans here in the States?
The thing is, with the States, besides the festivals we played, we only did two longer tours, and that’s one of the peak moments in the Darkane history. We just loved it! People are super cool taking care of you – and it’s great! I would say please, if they can – if they know of any promoters, push them to bring Darkane back to the US. We would love to go back and play there. Hope it happens!

The Darbies at The Redwood Bar – Live Photos 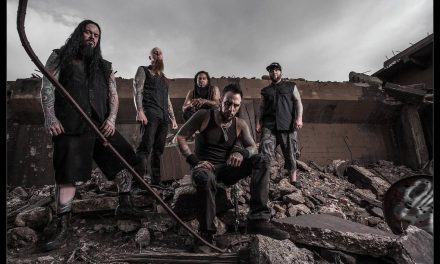 INVIDIA Unleashes Impactful Lyric Video for Single “The Other Side” 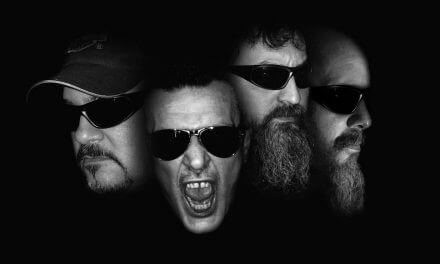 The ThrashCore Revolution of Aftermath