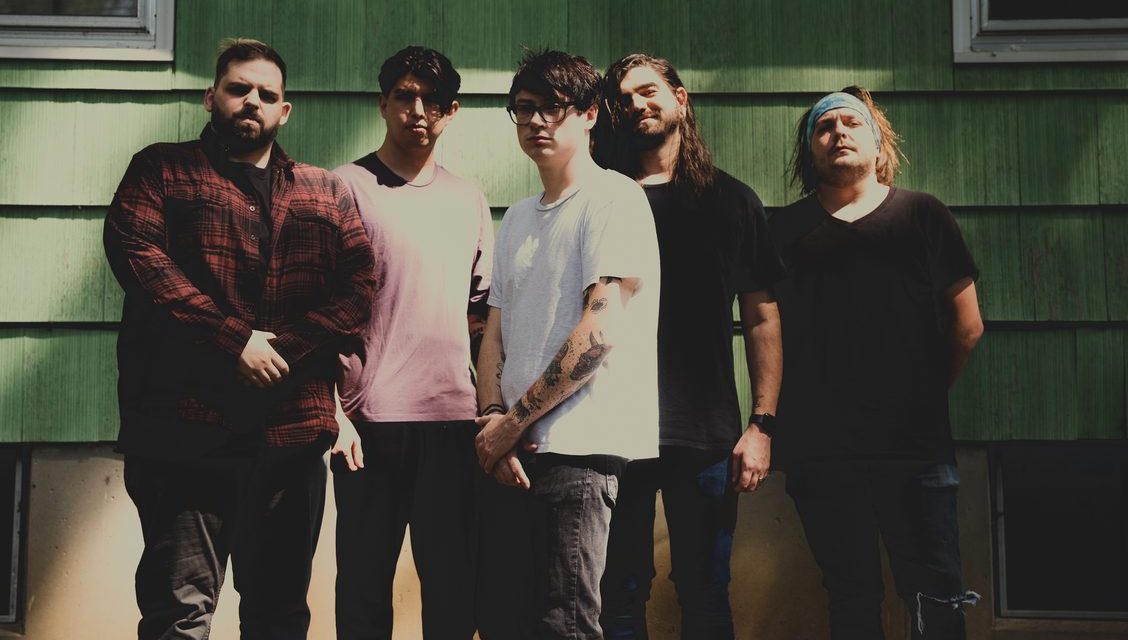 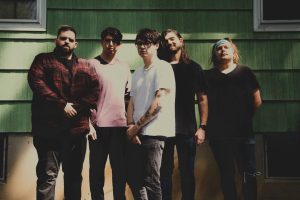 Clearfight from Kansas City, MO has just unveiled their second EP entitled Don’t Look At Me via Theoria Records – and this emotion pop punk manifesto is well worth seeking out!  Produced, mixed, and mastered by a combination of legendary producers who specialize in the genre such as Seth Henderson (Knuckle Puck, Real Friends, State Champs), Kris Crummet (Dance Gavin Dance, Belmont, Tiny Moving Parts), and Matt Malpass (Nothing Nowhere, Suicide Boys, Poorstacy, Anthony Green), Don’t Look At Me is a solid effort that should garner the band a good deal of attention above and beyond their Kansas City homebase.  Highwire Daze caught up with lead vocalist Hunter Spano to find out more about this amazing new band on the rise.  Read on…

Introduce yourself, tell me what you do in Clearfight, and how long the band has been together.
My name is Hunter – I sing for the band Clearfight – the band’s been together just over a year now. It’s been fun.

Where is the band based out of and what is your local music scene like there?
The band is based out of Kansas City. The local scene from what I could tell so far is pretty nice. I just moved out here from Chicago area, so for the first year of us being a band, I was located in Indiana about ten hours away.

I saw the first Clearfight Instagram post was in 2021. What was it like to start a band in the middle of this great worldwide pandemic?
A big risk (laughs), but definitely fun. Especially for me, since I was living out in Indiana, I had my own small project out there. Then I wanted to reach out and start working on other things – and then when I finally found a great group of guys to work with and put some music out with – they just happened to be a quarter way across the country. So, during the pandemic when gas prices are rising and overall, everything is just more expensive, it was definitely risky. But I’m happy with my decision that I made and I’m happy with what we’re doing so far.

How did you wind up on Theoria Records?
I was reaching out on Facebook to a lot of different label owners just trying to scout around – maybe find a deal for us. And I had found Cody through some mutual friends on Facebook – reached out to him – Cody being the owner of Theoria – and history from there. Sent him a message and said, “Hey, you want to check us out? We should get on a call sometime.” And now we’re signed to Theoria.

And now you have an EP that just came out on Theoria called Don’t Look At Me. Why call your EP Don’t Look At Me?
A lot of our music focuses on just dealing with mental health struggles and just not being okay in your own skin – hence our first EP that we did. It kind of just fits – especially with the tone of the songs, what we’re writing and the story we’re trying to tell. It’s a unique name in my opinion, but also, I think it works. 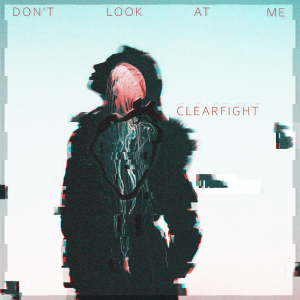 The Hate Parade is such an awesome song, What is the inspiration for the lyrics?
A lot of the inspiration – especially for my lyrics – come from past experiences. Although I am in a happy relationship now, I look back on a lot of the experiences that led me to where I am today – and the same with all the other band members to write our songs. Sometimes it can be hard just setting yourself in a box where you’re only writing about your current experience view. You kind of have to reach out and think about your past and try and see how it relates to what other people may be going through today.

Save It features Christian Fisher of Settle Your Scores. How did that collaboration come about?
I can’t remember exactly if it was me or Christian that reached out first. I think maybe we sent the song over to Christian and he just loved it and wanted to get on it. But I was in this Facebook group called Pop Punk Kids and Christian is just always posting it in and I post all the time. You see a lot of the same faces – and with me starting the band up with all the guys and wanting to network and just get my name out there more – and just try to get a little bit deeper into the industry – I just started sending friend requests out to people – and Christian just seemed like one of those guys to send out to since I was always seeming him on my Facebook anyway. It just worked out perfectly. I was a fan of their stuff before that anyways, so it’s just a cool experience being able to get him on a song, because he is just a great singer.

I looked at the list of producers who worked on your EP, and all I can say is just “Wow!” How did you get all of these name producers involved? Let’s talk first about Seth Henderson and what he was like.
So, with Seth – Seth was definitely a quiet and reserved guy, but he puts out quality. He put out what we were looking for – especially when we were putting out that first EP. Our first EP, Seth did all of it and when sitting down and listening to all the songs we write, we kind of had this Knuckle Puck-y / Real Friends vibe, and just thought it would work perfect if we could get Seth on it. So, we just shot him out a message and it just kind of worked out perfectly in the end.

Kris Crummet has incredible credits. What was Kris like to work with?
Yeah, same thing. Overall, great people. The way that he filled out our songs and especially our early releases is just amazing. Especially now on our newest EP, Kris killed it! With every single song on the EP, we were going to different producers. We have Kevin Gates on two of the song. We have Matt Malpas on one. We have Seth on one. Just for me to get our songs mixed to when we’re sitting around in our home studio messing around on our own – it’s hard for me to try to get all the songs mixed and sounding exactly like they fit together. But that dude took three different songs that some were recorded in Kevin’s studio – some were recorded in our home studio – and then mixed by three different people and made them all sound like one cohesive album – I give him props for it!

You said a lot of the song dealt with mental health. How were the songs also influenced by the pandemic and all of the social unrest in the world – if at all?
Oh absolutely. A lot of what we were writing, especially when I was coming in – I was bringing in a lot of lyrical content I had been cooking up from my previous band. And I started that band right at the beginning of the pandemic, so all the lyrics I was coming up with – most of them were stuff I was making 1-2 years ago and then ended up putting into a song because it fit into that one line or because the chorus was really catchy.

Kris Krummet – one of his credits was Belmont and you’ve opened for Belmont. What was that experience like opening for Belmont and did you get to meet or hang out with them at all?
That experience was pretty awesome I will say. I haven’t been playing music long. Before this, I’d only played four bar shows in front of maybe 60 people total. I played one show opening for Attila – that was a small show too. All my experiences had been pretty small, so for our first show – we ended up getting it with Belmont obviously. The room was around 200 people for tickets sold – and fan/crowd interaction was amazing. The guys treated us like we were on the tour with them. For all the other shows that I’ve played – even with the Attila show – I didn’t really feel like as an opening local band – like we were treated as serious as those guys who were on the road. But Belmont treated us like we were best friends. At one point during the show, I was hanging in the back with Taz playing Grand Theft Auto 4 on a PS3 back there for like 45 minutes. We were watching the UFC fight on a computer over at their merch table together. So, it was cool. We all stayed after the venue closed like an extra hour hanging out too.

That sounds like a great experience…
Oh yeah, especially for the first show for the band – it does good for the morale of the band just all together when you have a show like that as your first one.

If Clearfight could open for any band either now or from the past, who would it be and why?
I think the biggest band I would want to open for right now is Stand Atlantic. For one, Bonnie’s voice is just incredible to me. The grit she can push out while just ripping those high notes – it inspires me – especially in our song Dropout, after getting into Stand Atlantic, I was trying on my own to incorporate grit into my high notes. And I’ll 100 percent give credit for getting inspired by Bonnie for that.

Has Clearfight played out here in the Los Angeles/OC area or have you done any touring yet?
Not yet. We’ve actually only played two shows so far. We had our first show with Belmont, and we just did our second show about a month and a half ago with Such Luck out here in KC. Both of our shows have been local Kansas City shows. We space then apart pretty decently just because we don’t want to play too many local shows and oversaturate. But we do want to play in our local because we love our local. We do want to branch out and hopefully get on a tour. Looking for the right opportunities.

Attila is pretty crazy. Tell me about that experience you had opening for Attila with your previous band.
I will say it was a heck of a show. We were more on the easycore side of pop punk, so we kind of didn’t really fit all together. But the show was incredible. The boys in Jynx – they treated me like they were homeys with me, and I still talk to Tommy the singer of Jynx to this day, so it was a great networking experience – even if the turnout for my band at the time wasn’t the best, it was a great networking experience.

What do you hope the brand-new year brings for you and for Clearfight?
Honestly, hopefully just some more inspiration. I’d love to get another EP out within the next year – I think that would be great. I just want to work on this and put out the best songs I can. 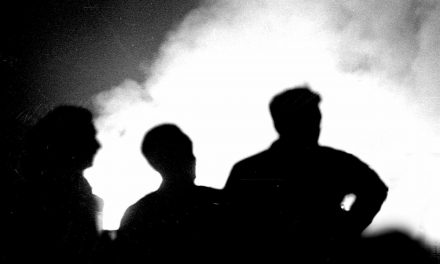 AN AUTUMN FOR CRIPPLED CHILDREN To Release All Fell Silent, Everything Went Quiet Via Prosthetic Records May 1st 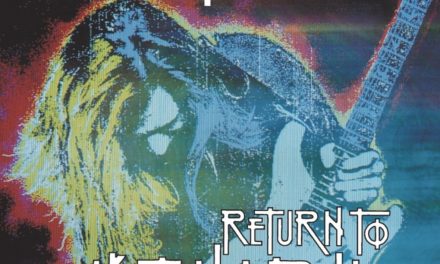