The Babys and Mycah at The Rose

John Bisaha of The Babys at The Rose

The Rose in Pasadena was certainly the place to be on a hot rocking Saturday night, where The Babys would be headlining a show jammed packed with past, present, and future hits. Playing songs from all six (and possibly seven) of their studio albums, The Babys clearly demonstrated that their vast catalog of tunes are truly everlasting entreaties. Kicking off their set with the gloriously rapturous one-two punch of Back On My Feet Again and Midnight Rendezvous, The Babys had the crowd on their feet and singing along from the very start of their performance until the final moments of the show. The Babys 2017 lineup is absolutely first rate and on fire, featuring original members Tony Brock on drums and Wally Stocker on lead guitar – joined by the impassioned vocals and thunderous bass of John Bisaha and the kick ass guitar work of Joey Sykes. Also onstage supplying wonderful support were Francesco Saglietti on keyboards as well as Holly Bisaha and Elisa Chadbourne on sparkling backing vocals. So many grand and wonderful rock and roll selections in one night – Isn’t It Time, Darker Side Of Town, Looking For Love, Every Time I Think Of You and so much more – for all to enjoy brought to ultra-vivid life courtesy of The Babys!

Be sure to visit The Babys at their Pledge Music page and become part of their upcoming Timeless: Anthology II album – slated to feature re-recordings of all of their classic tunes as well as four brand new songs! If you cherished the landmark collective back then, rediscover the modern day version of this legendary band and prepare to go goo-goo gah-gah over The Babys once again! The Babys will be headlining the world famous Whisky A Go-Go on the Sunset Strip December 2nd! Highwire Daze Online will definitely be there and so should you! Now celebrating their 40th anniversary, The Babys are sure to enrapture their longtime fans as well as brand new converts for many more rock and roll years to come!

Kevin Goocher, Devon Mycah, and Tyler James Renga of Mycah at The Rose

Local up and coming band Mycah kicked off the night, warming up the crowd with a wonderful selection of cover tunes and original songs. First and foremost, Ms. Devon Mycah is a warm and radiant presence onstage, with a remarkable voice that swept gloriously throughout the cavernous nightclub. In this acoustic setting accompanied by two acoustic guitars, Devon’s vocals was splendidly showcased, displaying just how effective and sweetly emotional the Mycah experience is. Familiar material such as Crazy Little Thing Called Love (Queen) and Dust In The Wind (Kansas) has the early arrivals singing along. The original material was absolutely stunning, with songs such as I’m Okay Now and I’ll Always Have You leaving an indelible impression on the crowd. And did Mycah ever rock it out in the acoustic format when the final cover tune Ramble On by the almighty Led Zeppelin was unveiled at their end of the set!

In addition to Devon Mycah’s captivating performance, the two acoustic guitarists left their own auditory impressions on the proceedings. Tyler James Regna is a longtime Mycah participant and his guitar interludes superbly compliment the dazzling Mycah. And then on the other side of the stage we have the one and only Kevin Goocher, who has spent time with the legendary heavy metal Omen and now headlines Of Gods And Monsters – and what a treat it was to see the consummate Mr. Goocher supporting his immensely talented daughter on the stage. Whether acoustic as displayed on The Rose stage or with a full on band in tow, the future of Mycah looks very bright indeed. Stay tuned as Mycah is truly a bright and vibrant star on the horizon not to be missed! 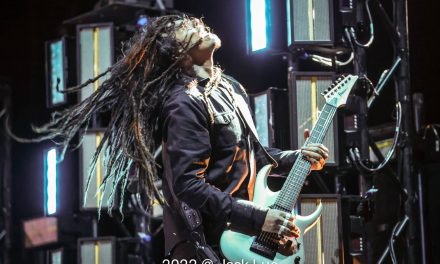